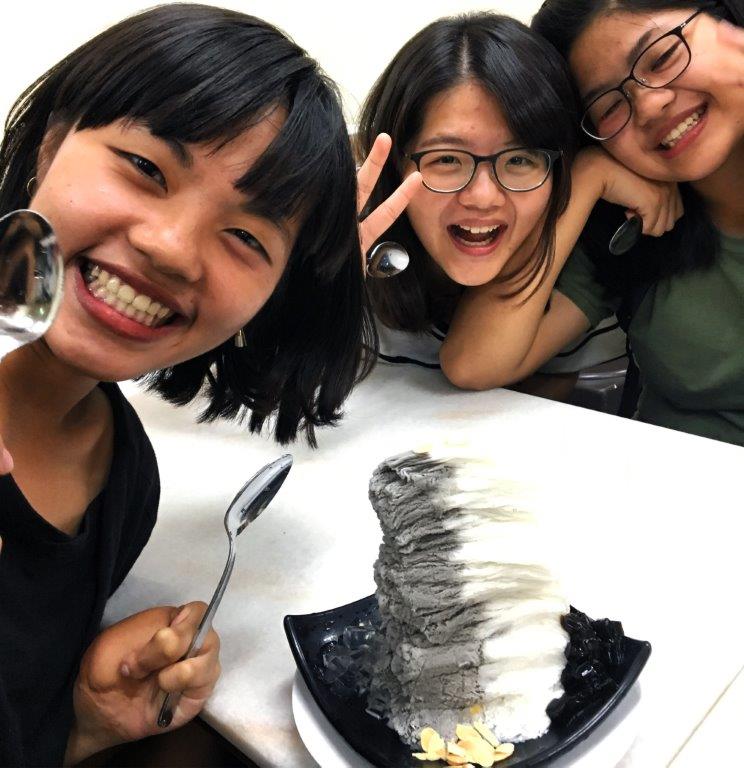 Singapore is all about food. Even simple shaved ice is elegant and delicious.

In 2016, the Guide Michelin introduced their first guide to dining in Singapore. This tiny city-state has always been all about food but Michelin has made it official, labeling it the dining capital of Asia. 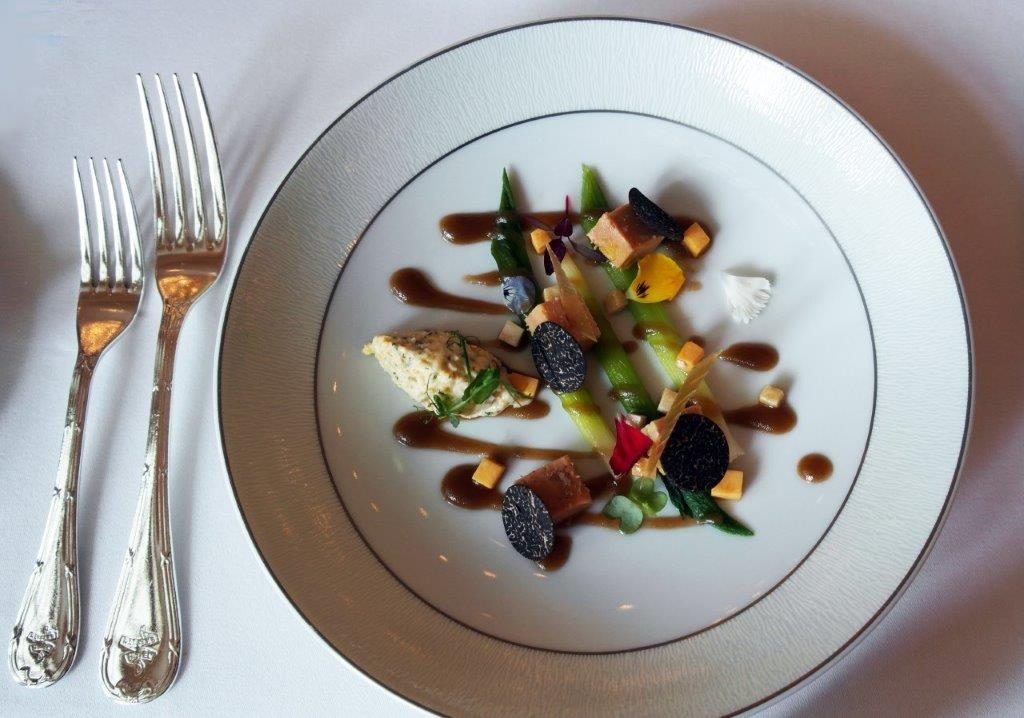 Foie-gras with truffle shavings and baby leeks at Raffles Grill.

Locals will shell out $75 for a meal in one of the city’s star-studded restaurants, while they also regularly patronize the more than 6,000 hawkers found all over the city. 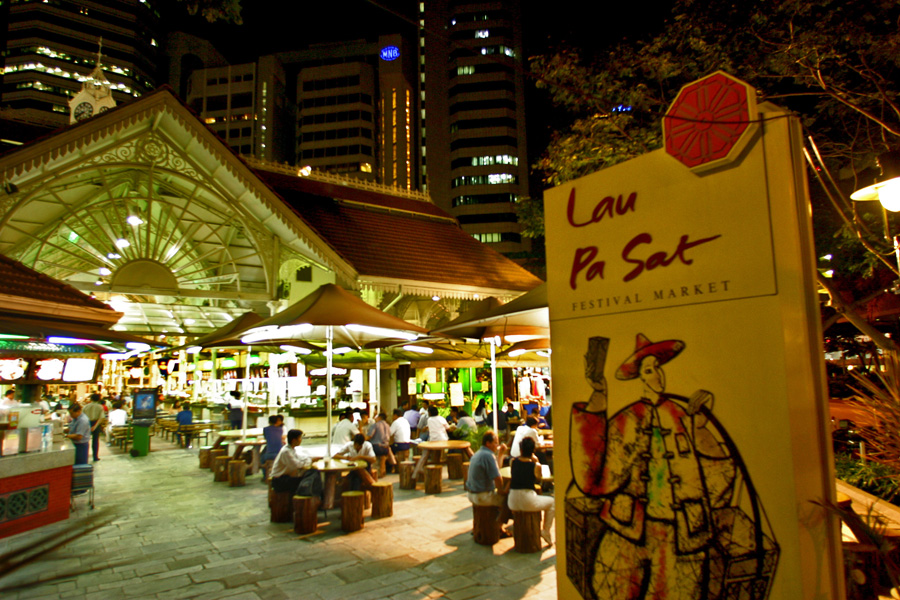 A favourite ‘hawker centre’ for locals and visitors.

Indeed, looking for an inexpensive and delicious meal is easy at “hawker centres” such as Lau Pa Sat. These food courts can be found all over the city. 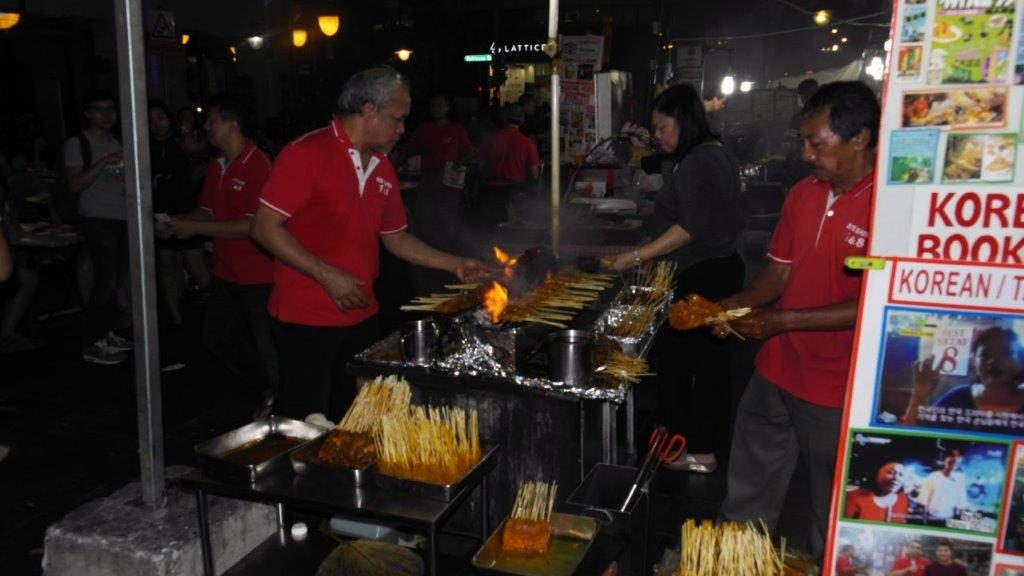 And here’s the good news. The government’s food inspection program ensures that the food meets high standards. Everyone serving food displays an inspection card with A or B. Both are acceptable. 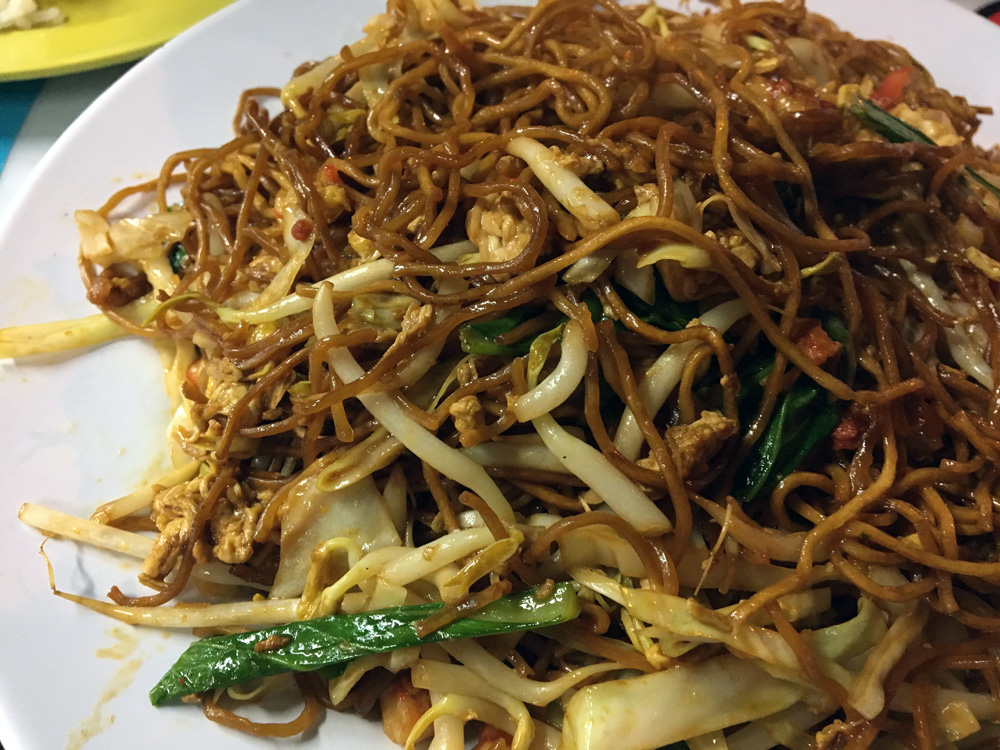 In fact, we enjoyed an outstanding plate of Hong Kong Noodles (called Singapore Noodles everywhere else in the world) at a B-grade no-name hawker for $5! 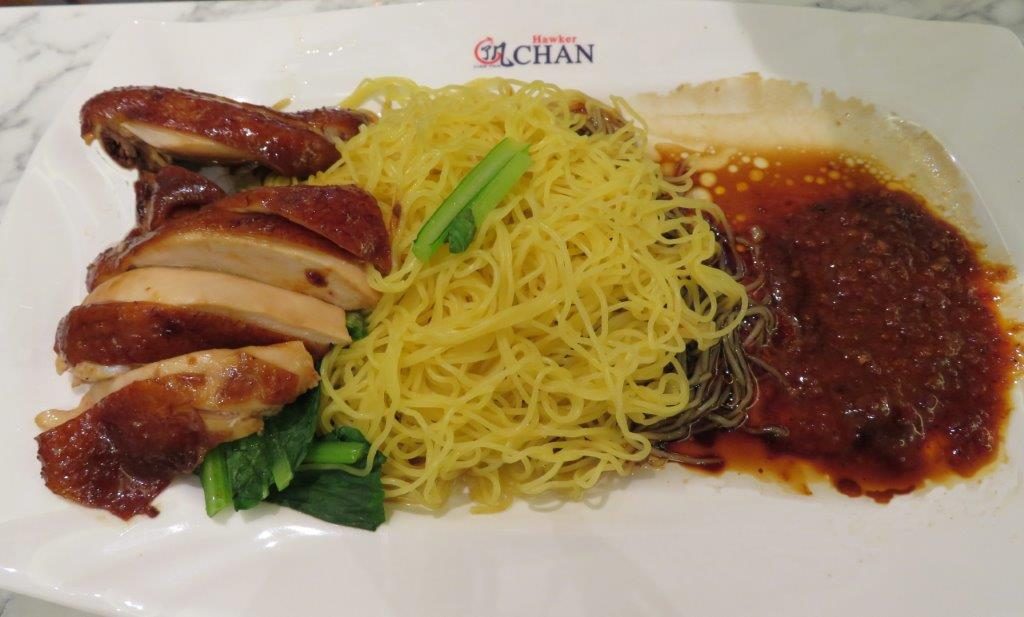 Hainanese chicken and soya noodles from Hawker Chan – the only Michelin starred hawker in the world.

Did you know that Singapore is the only place in the world where you can enjoy a Michelin starred meal for under $4? Liao Fan Hawker Chan is the first hawker to be awarded a Michelin star. 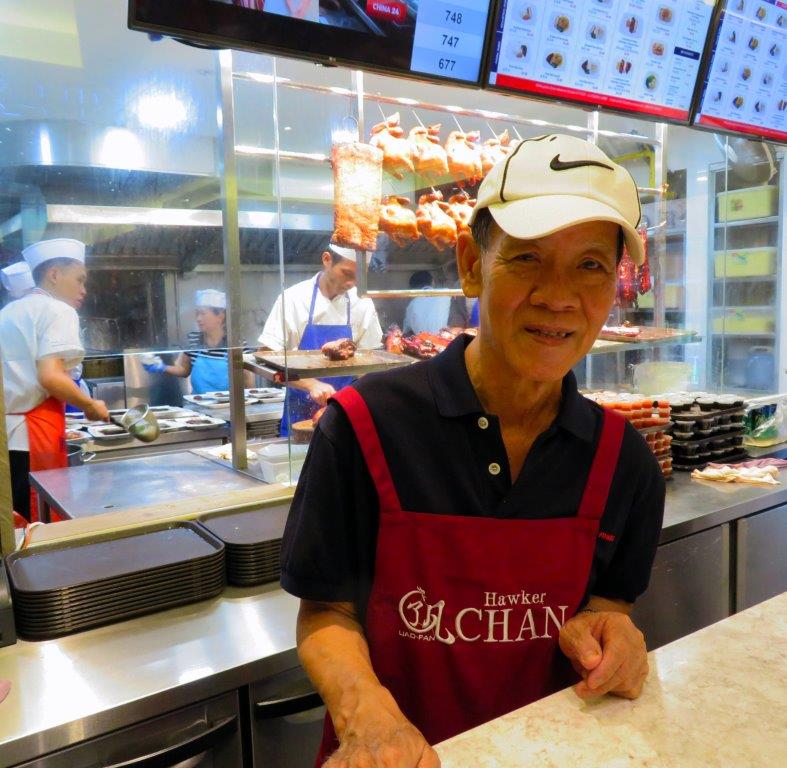 Hawker Chan in his restaurant

Of course, it was just under $3 before the star was awarded. Then Chan raised the price – just as all Michelin starred chefs do! 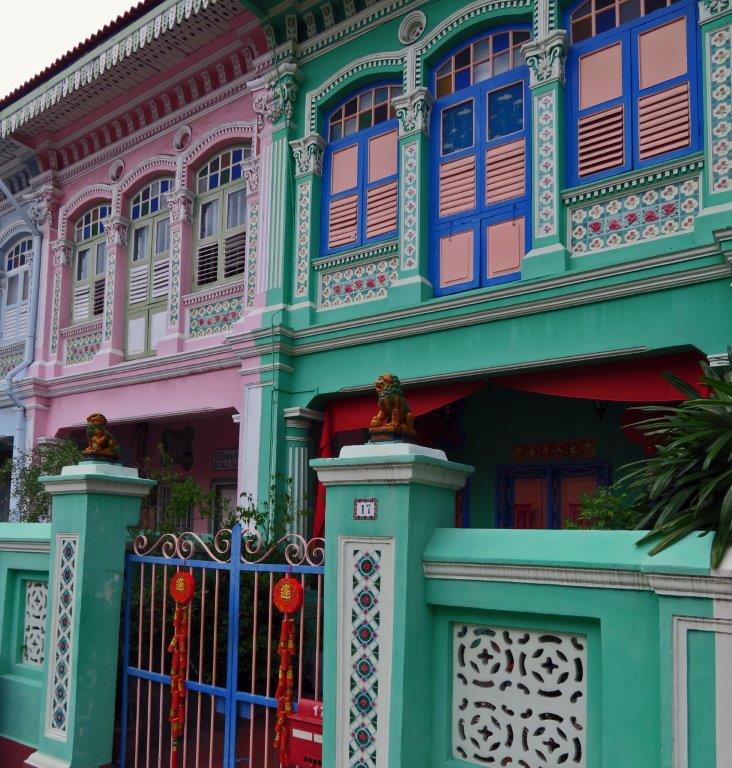 Joo Chaitt – the Peranakan part of Singapore – is doing much to preserve the distintive architecture of the area.

There are distinct areas of the city which have strong cultural ties to each of these communities. 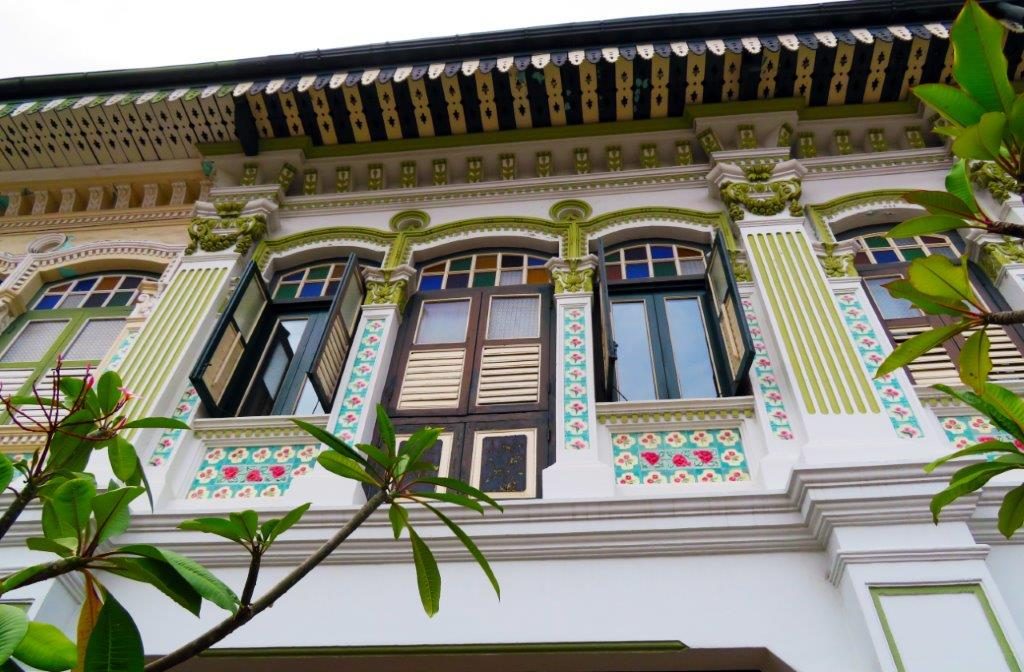 A close-up of a typical Peranakan home with its beautiful detailing.

But Malay and Chinese influences have been the strongest and a historic blend of these has created a unique Singapore culture – Peranakan – which is enjoying a new zenith these days. 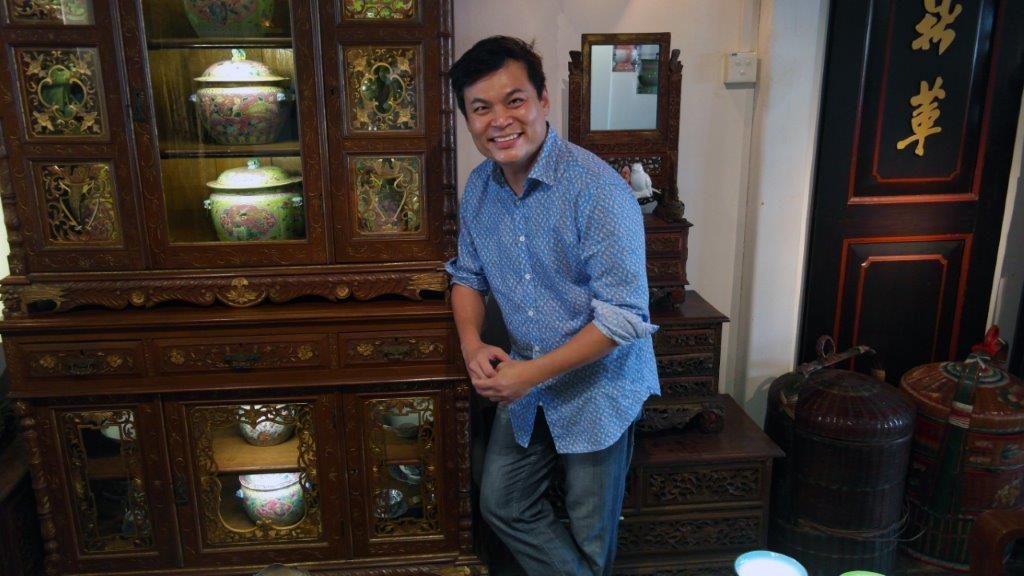 Alvin Yapp has turned his home with its collection of Peranakan artifacts into a wonderful museum called The Intan.

Peranakans can be defined as those descended from the early marriages of Chinese men to the Malay women they found when they came to work here from the 15th century on. Today there is a new pride in these blended roots. 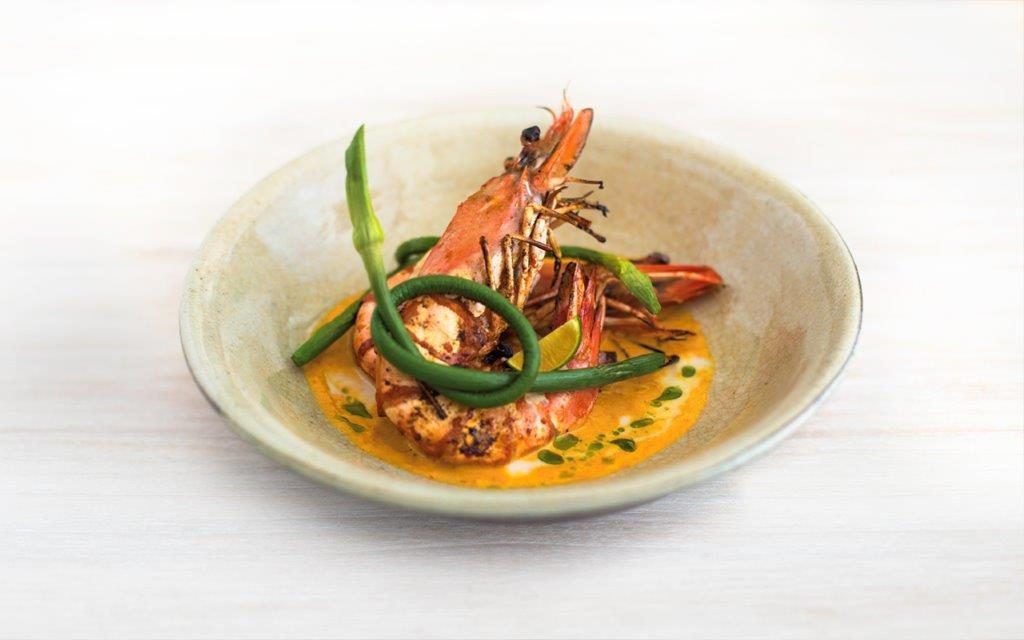 Restaurants are springing up which serve Peranakan dishes such as Rendang (a slow-simmered spicy beef dish), Kueh (small cakes and sweets usually containing coconut and palm sugar), and Laksa (a spicy coconut soup with noodles, fish and meat which reputedly takes many hours to prepare, and for which the recipes are generally closely guarded family secrets). 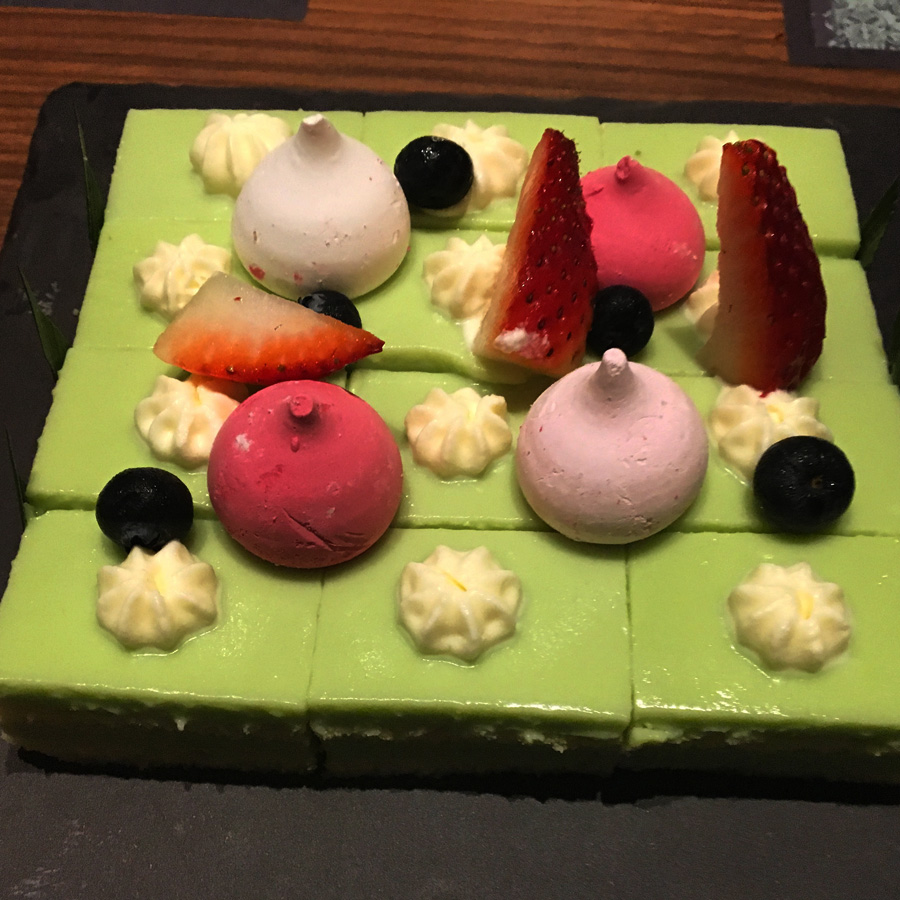 Singaporean love of their historical roots and pride in the food that has evolved from these. So Peranakan food, using authentic, local ingredients, is hot. 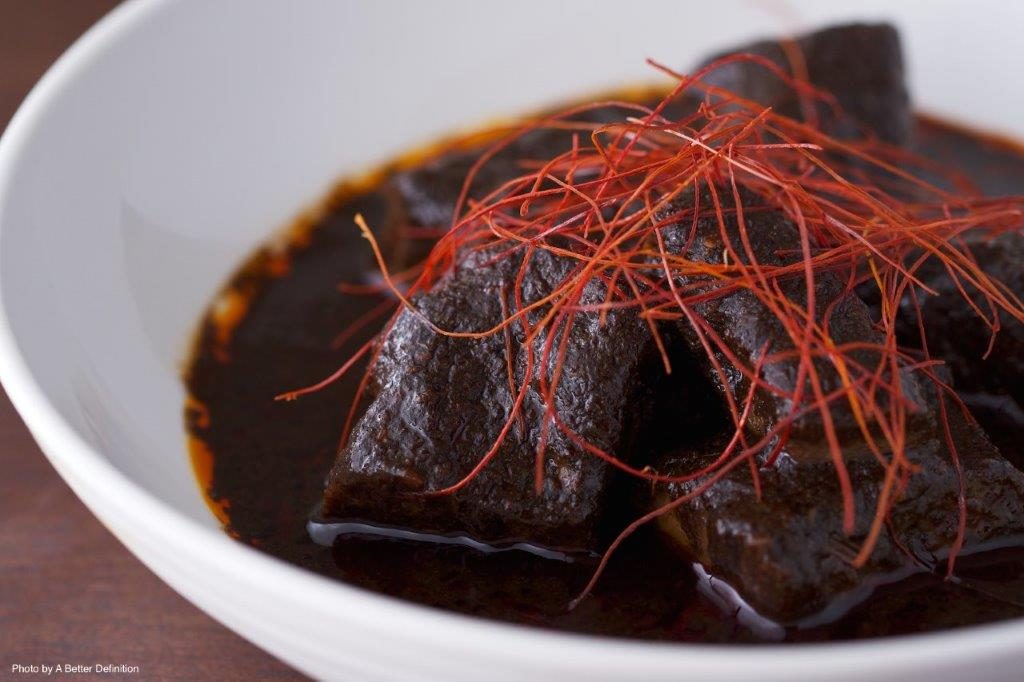 Buah Keluak is a traditional Singapore stew. It’s not colourful but it is delicious. This one is served at Candlenut.

But Singaporeans are also adventurous diners, interested in other cuisines and in experimenting with new foods. This has seen the opening of new restaurants serving what has been dubbed Mod Sin (Modern Singaporean) by its creator, Willin Low, owner of Po and of Wild Rocket 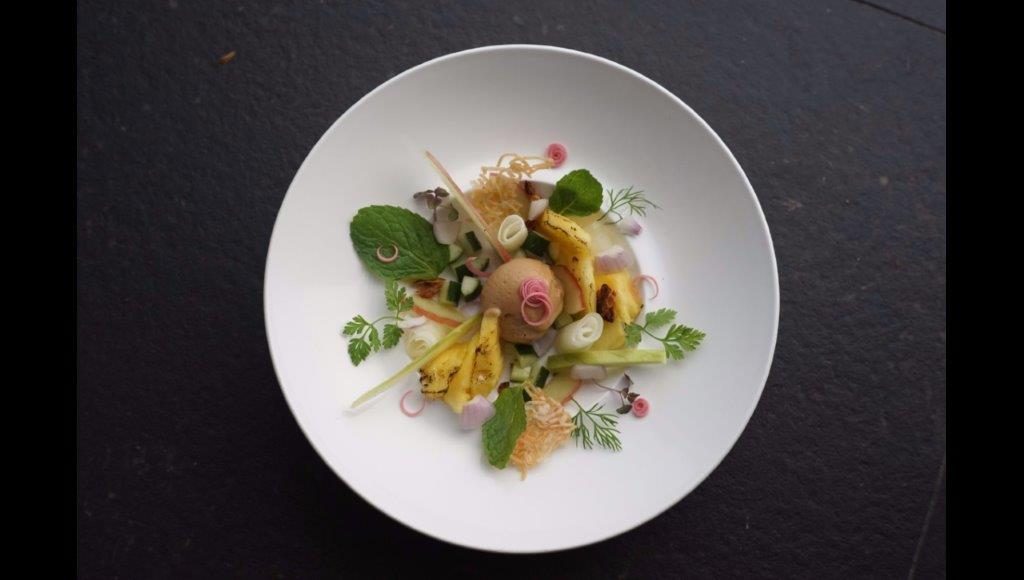 But don’t call Mod Sin a fusion cuisine. “Fusion is confusion,” he says emphasizing the first syllable. “You have to remember that food is not limited by geography today. I like to borrow ingredients from everywhere.” 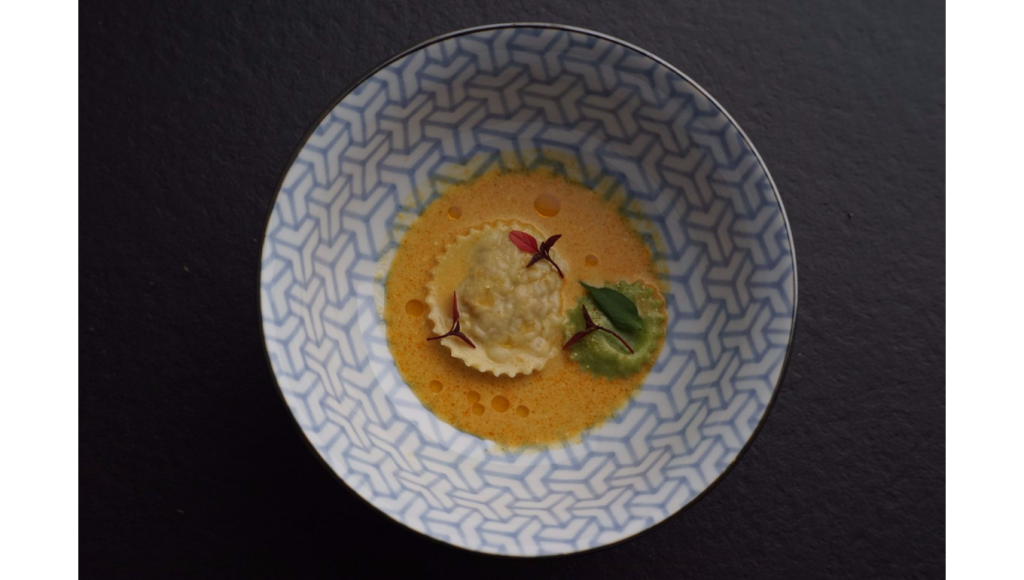 Nonetheless, he insists, it’s important to remain true to one’s roots, “In this age of globalization, I think it’s important to celebrate why your country is unique. If everyone wants to make cupcakes, then no one will remember how to make the kueh that my grandmother used to make.” 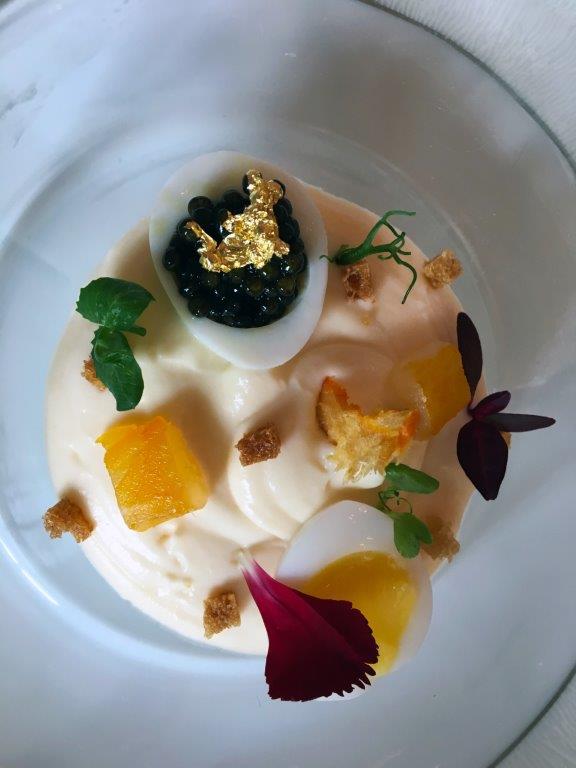 Raffles Grill, the oldest Western restaurant in Singapore, is located in its oldest hotel, Raffles. Chef Pierre Burgade offers diners French cuisine with a modern twist. His special degustation menu is a masterpiece of small plates, each perfectly crafted in a marriage of colour and flavour. Burgade has to please discriminating palates. For more than 100 years, Raffles Hotel has played host to the world’s gliterati and most of its royalty.

Bartender in Raffles Long Bar mixes a classic Singapore Sling – a must for visitors to Singapore.

During British colonial times, this was the place to go for a Singapore Sling at the Long Bar, for an elegant dinner, or for afternoon tea. 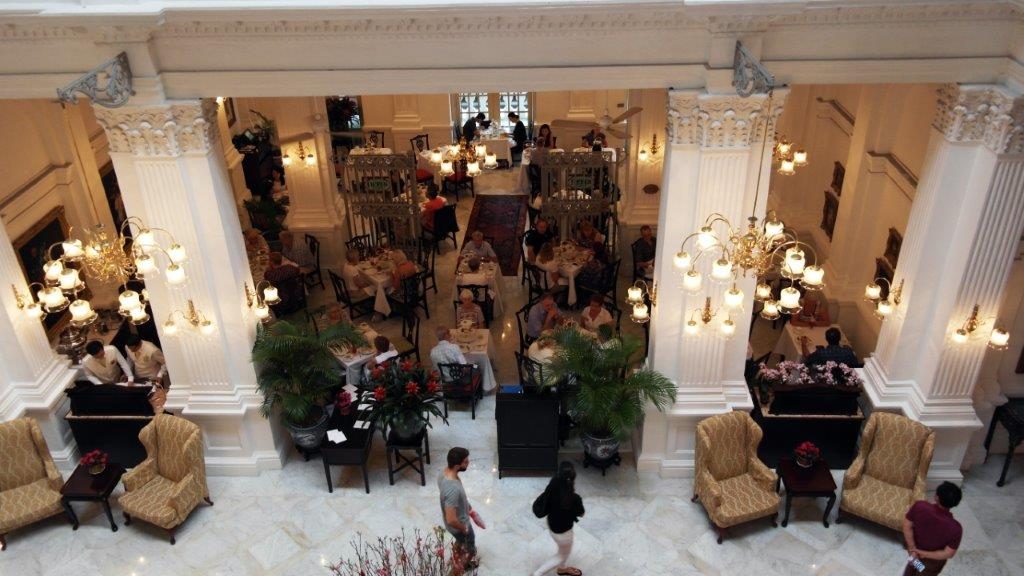 Afternoon tea is still served in the Tiffin Room at Raffles Hotel.

Faithful to British tradition, you’ll still find a complete afternoon tea served in the Tiffin Room at Raffles. Indeed, this decadent indulgence is served all over Singapore. 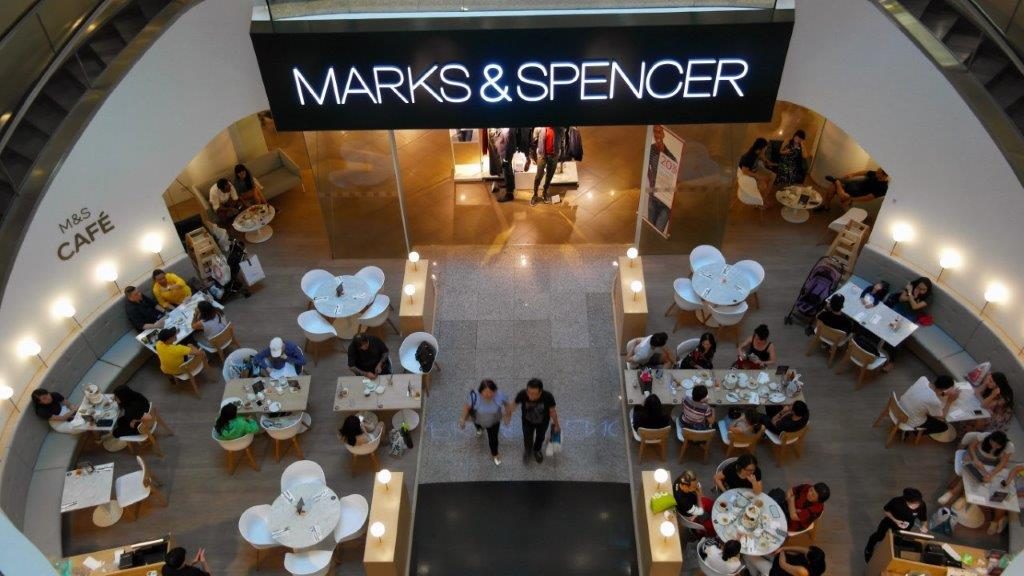 You’ll even find a charming afternoon tea at Marks and Spencer’s café on Orchard Street in the heart of the chic shopping district. 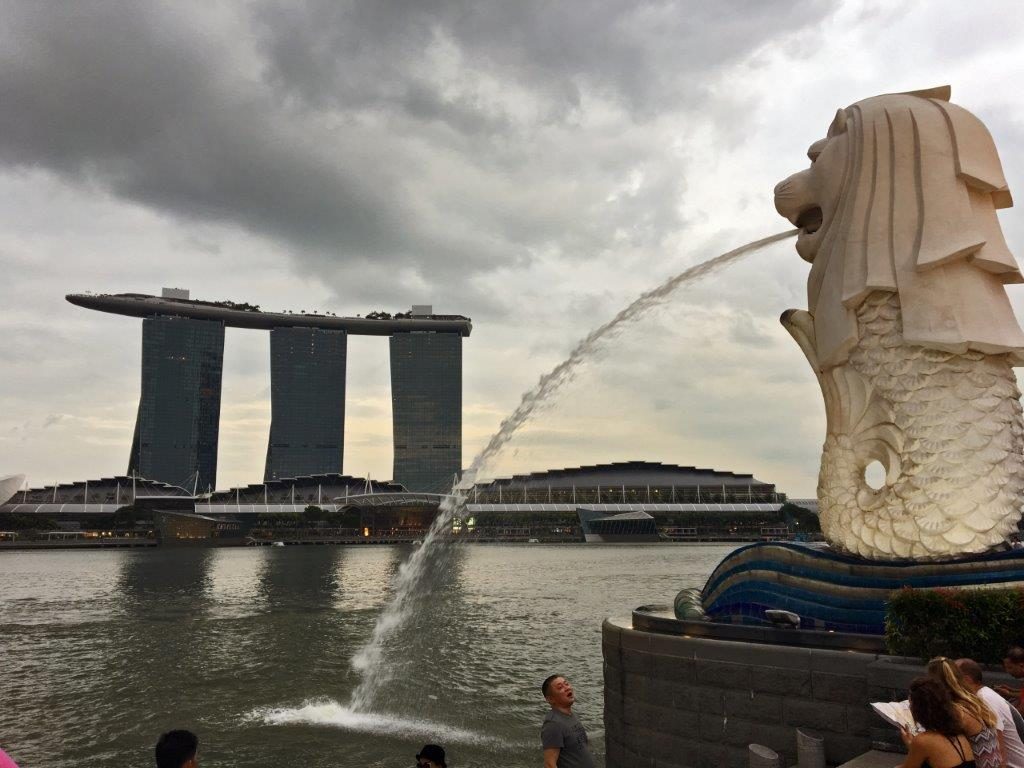 The Merlion is Singapore’s iconic symbol and n the distance, is the Marina Bay Sands Hotel and Casino.

*** Asian food can be quite exotic. Consider China’s night market’s contribution to the food scene. Less extravagant but equally exotic is Hong Kong’s food scene. Don’t want to go all the way to Asia? Did you know that Richmond, BC  is  Canada’s Asia Central and has hundreds of amazing restaurants featuring the food of Korea, Japan, China, Viet Nam, Thailand, and much more.?