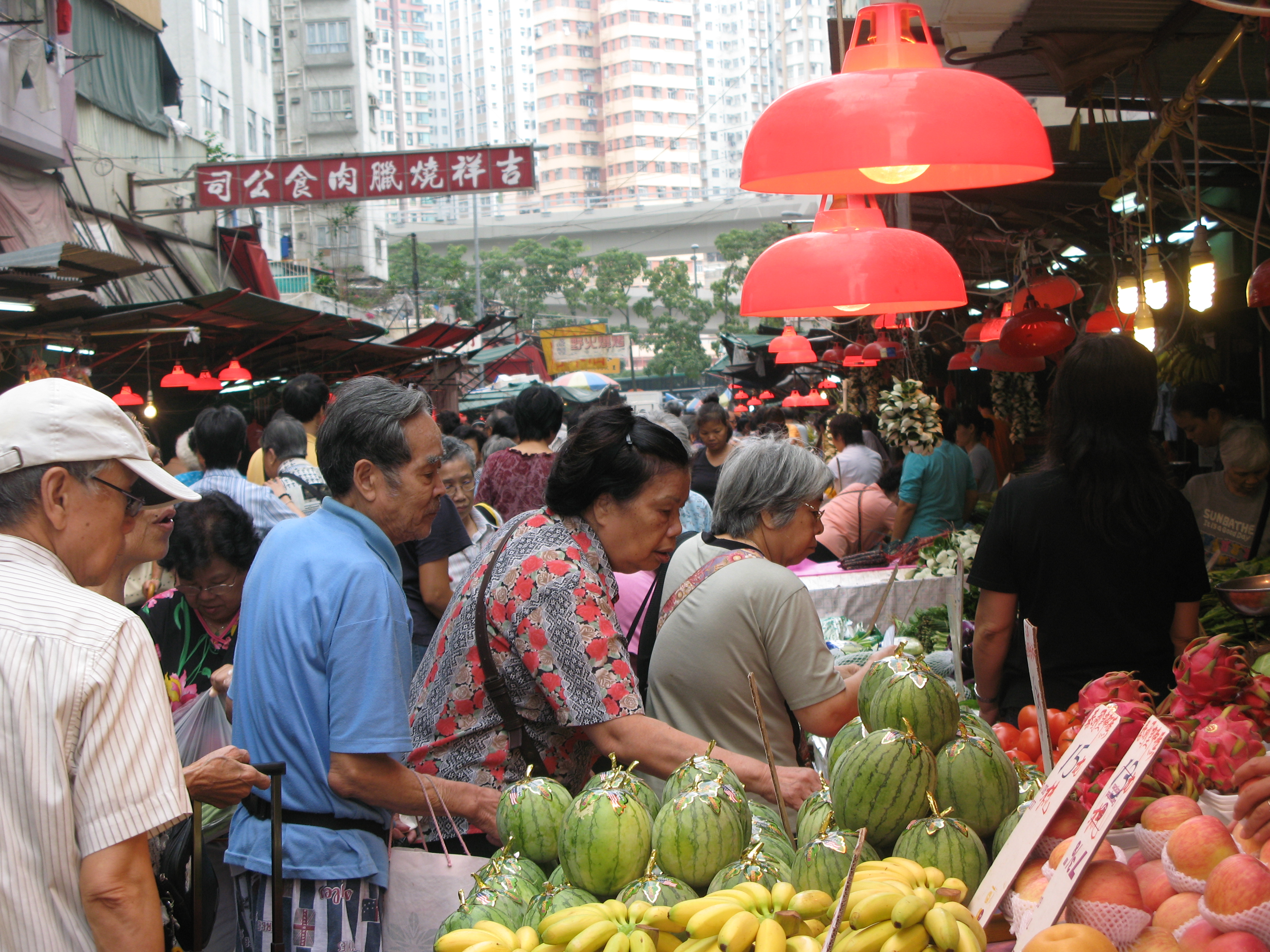 It’s a wonder to me that every Hong Kong citizen isn’t obese. Eyeing the streetscape before me, it rapidly becomes obvious that the people of Hong Kong really like to eat. They also really like to shop. Restaurants and clothing stores – two necessary and inextricably linked services (more food, larger clothes) – vie for number one spot on the ubiquity scale.

Yet, these same citizens don’t appear to be rushing out to buy ever-growing sizes as their girth increases. Most people seem to be slim, fit, and in Central Hong Kong or its mainland twin city, Kowloon, many appear to be dressed in the latest chic from London, Paris and Rome fashion houses.

The answer lies in the contradictions which make up Hong Kong culture. While they watch the West and emulate what they see as trendsetters, at base they are Chinese with all the values of this traditional culture. They may be scarfing down the occasional burger at McDonald’s, but they aren’t supersizing them. Restaurants serve generous portions but these are meant to be shared with several people – food simply isn’t a singular activity. 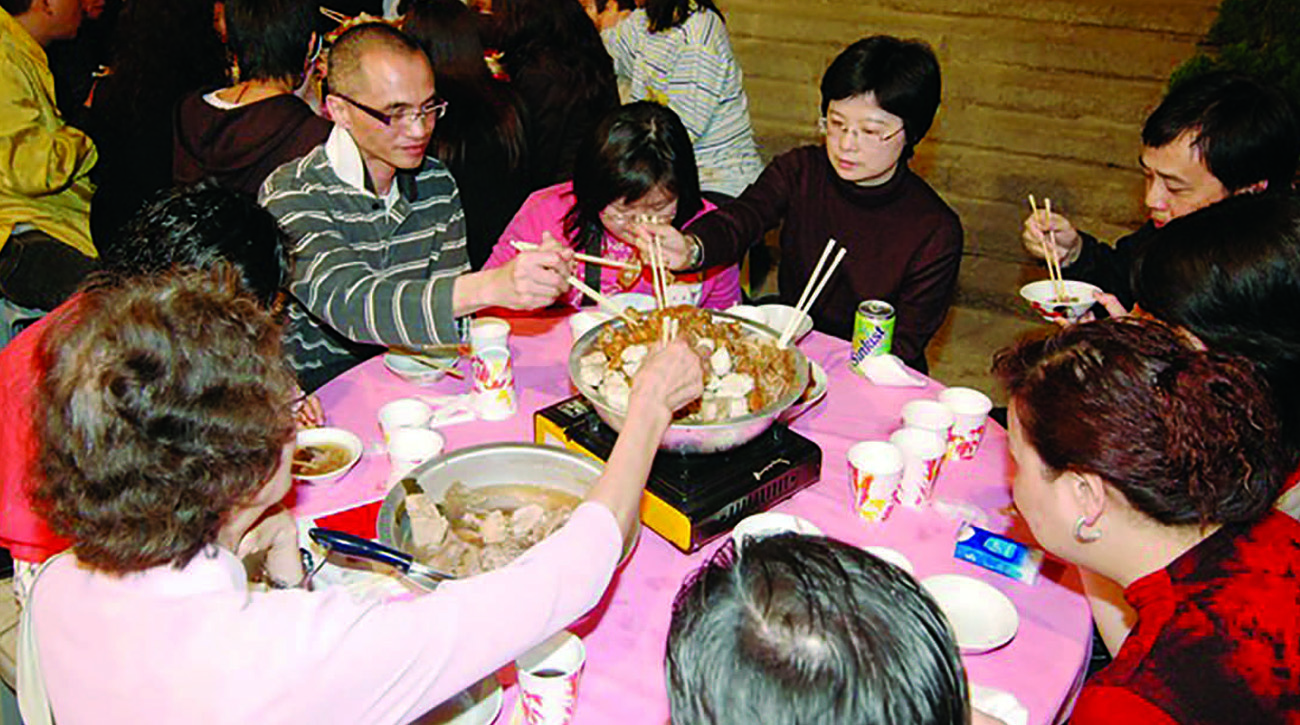 Indeed, it’s hard not to love the communal Hong Kong/Chinese way of approaching dining. Most restaurants have huge, circular tables whose central, revolving lazy Susan gets piled with dishes into which hungry diners tuck with great gusto. Chopsticks are useful but not mandatory. Oddly enough, I find delicately picking another piece of meat from the platter with chopsticks somehow doesn’t seem as offensive as performing the same action with a fork.

Food comes out when and as it is prepared, in no particular order, so it is fresh, hot and delicious. Soup invariably forms one of the last courses. And dessert is usually slices of fresh melon, grapes, pineapple and other delicious fruit. What the Chinese have always known is that dining on moderate portions of several really good tasting dishes is healthier and more satisfying than overeating. 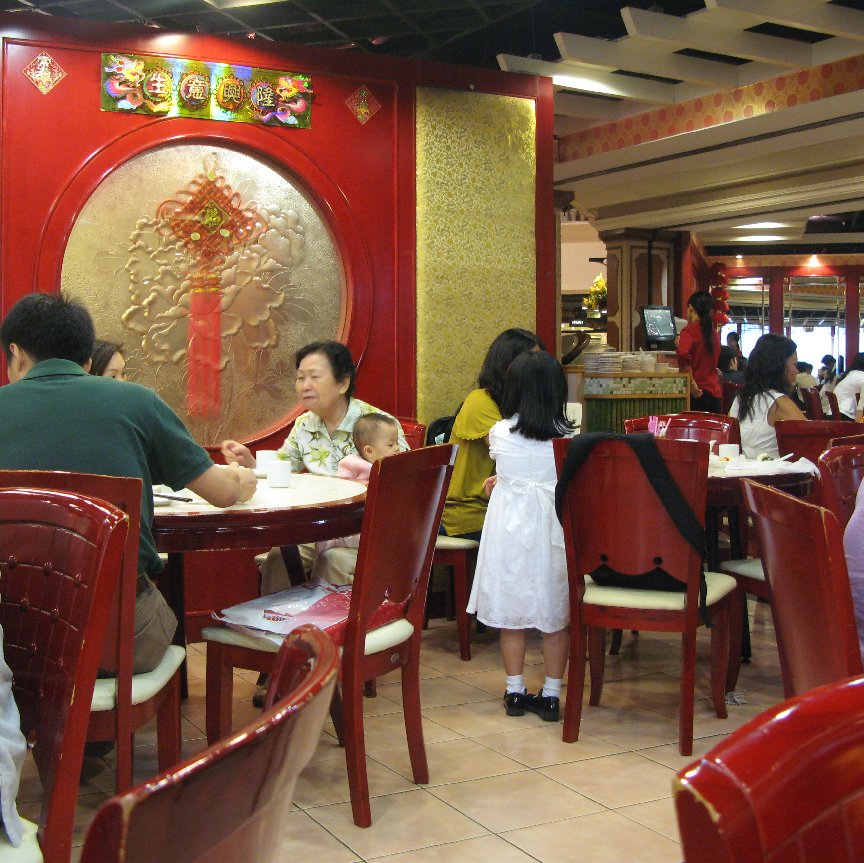 It’s important to sample every level of cuisine here, beginning with a corner congee shop for breakfast. My first experience of this breakfast dish was actually on the plane. Cathay Pacific offers this on the breakfast menu so I tried some. Congee is a watery rice porridge to which locals add all sorts of things – mushrooms, seafood, green onions, pickled vegetables and even chili sauce. While this sounds vaguely unappetizing, it is, in fact, really tasty, and a hearty way to start the day – as hearty as Scottish porridge! 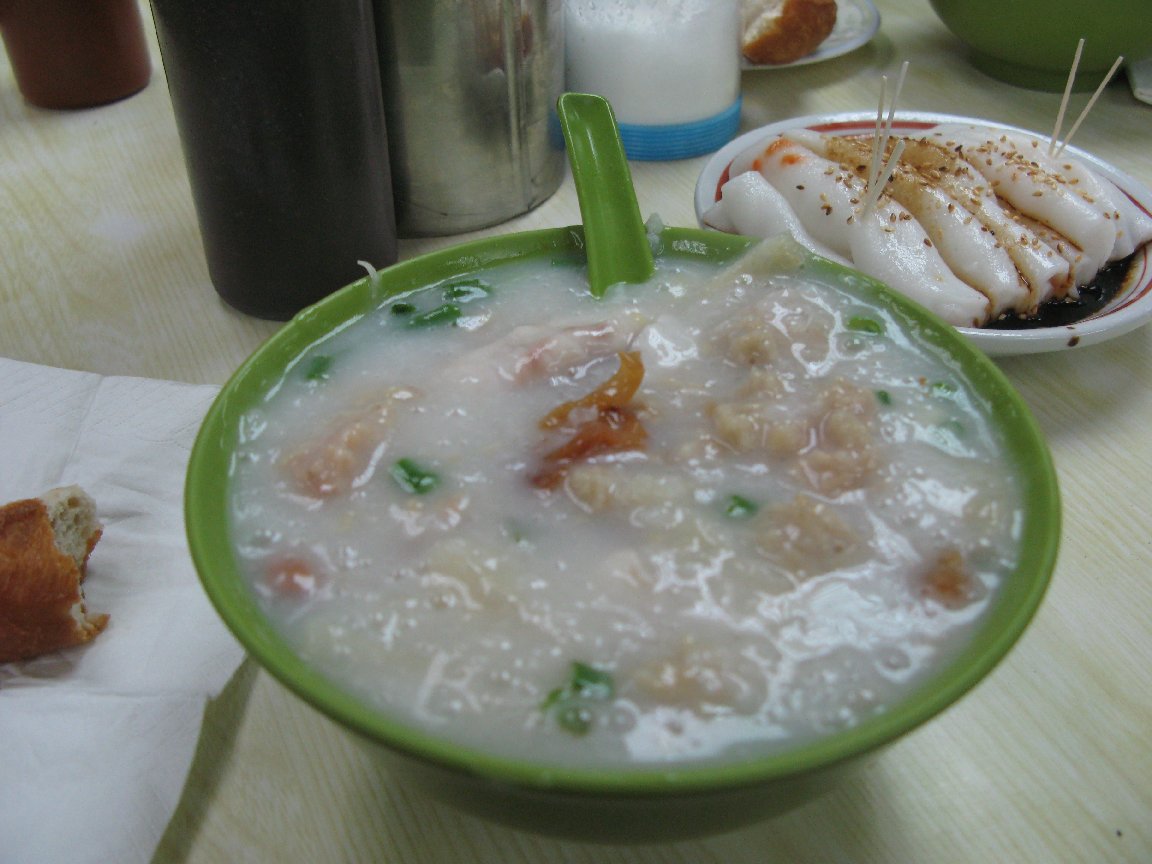 While few Westerners know congee, everyone has at least heard of China’s most famous contribution to dining. Dim sum, which serves as everything from brunch to afternoon tea, means literally “touch the heart” and is an opportunity to sample many, many small dishes.

At OVOlogue, dim sum is as gorgeous as the setting in which it is served – a sort of Zen meets minimalist chic of grey walls and dark wood, all set in a historic building which once housed a famous pawn shop. The food is as beautiful as the surroundings – delicate mushrooms in a rich truffle oil sauce, grilled scallops done to a mouth-watering turn, picture-perfect shaomai dumplings stuffed with pork and tasty turnip dumplings (seen below). 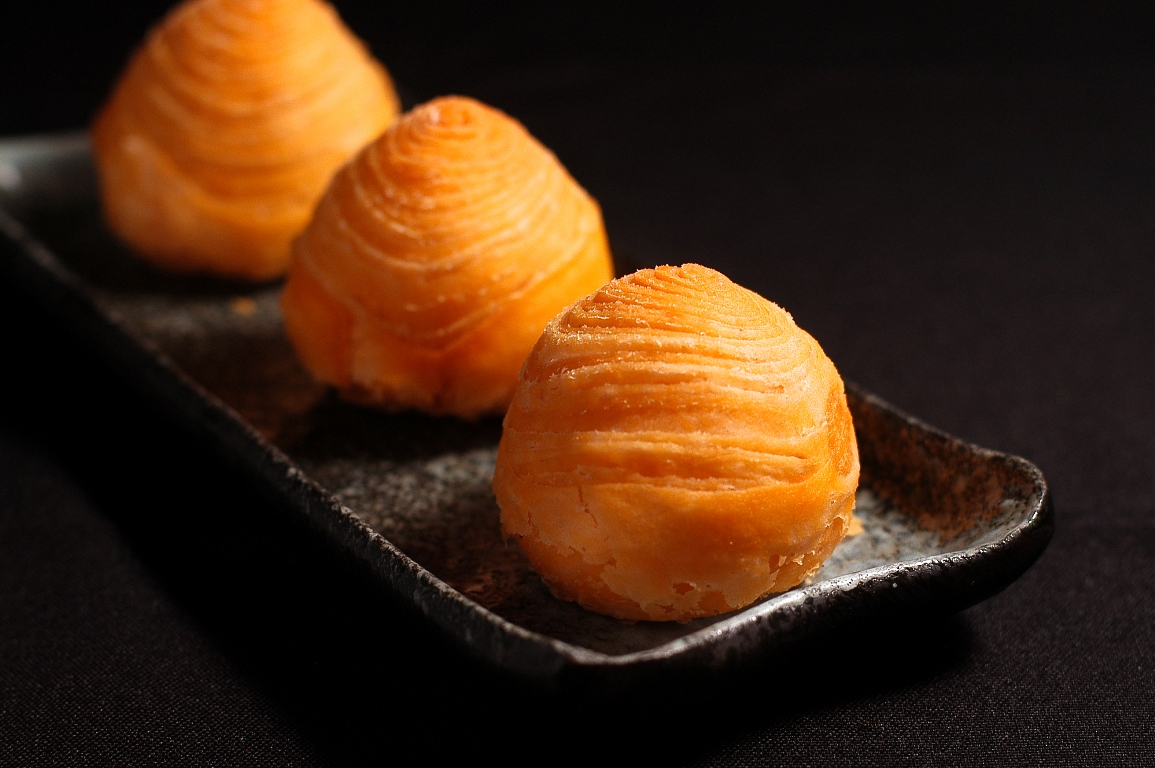 By contrast, dim sum at Tao Yuen in central Kowloon has all the hallmarks of rough and tumble family dining. In the red and gold décor ubiquitous in Chinese restaurants the world over, we spin a turntable laden with noodle soup, dumplings and sweet and sour pork. It’s all so good, it’s hard to stop myself from taking one last little morsel – again… and again!

Most people come to Wing Lai Yuen (same red colour scheme), at Whampoa Gardens in Kowloon, for their famous handmade dan dan noodles in a spicy peanut broth laced with pork, prawns and cabbage. This was once the fare sold by street hawkers. I could not believe noodles could taste so good. Marco Polo thought he’d got the goods when he took pasta back to Italy, but he didn’t get the recipe for dan dan!

My guide, Denny Ip, who helped out with the Michelin Asia Guide, explains that this restaurant has been run by the same family for generations and introduces me to its sprightly owner, Mrs. Yeung, who has won numerous awards including the equivalent of ‘Woman of the Year’ by the central government in Beijing. She explains that the original shop was in the poorest district of Hong Kong but everyone loved their noodles so much that they slowly moved up – and out into the world. Restaurants will be opening in Beijing and Tokyo shortly.

At Wing Lai Yuen, I discover a whole new delight – shao lung dumplings. I dip each plump ball of dough into vinegar and pop it whole into my mouth. The first bite into the dumpling reveals the interior’s little surprise as chicken broth and pork burst onto my palate. Heaven! 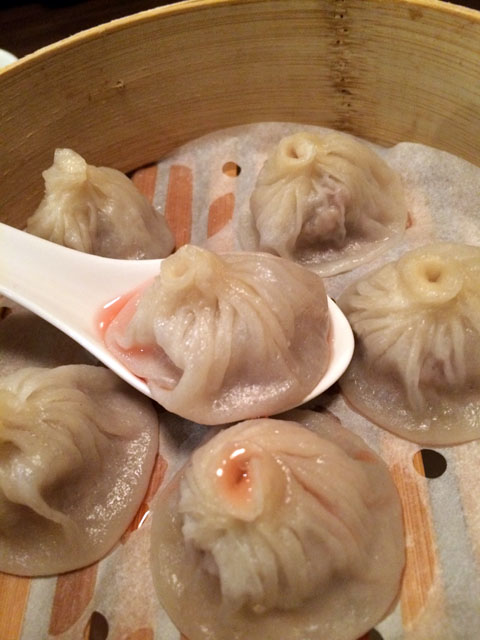 On the other hand, deboned duck’s tongue marinated in wine – do ducks have bony tongues? – is glutinous and winey – definitely not appealing to my taste buds.

Being on the water, fish and seafood are a given on most menus and no culinary visit to Hong Kong is complete without a visit to Lamma Island, a short ferry ride away. We lunch at the legendary Rainbow Seafood, where we pick our own seafood from the tanks. It arrives fresh and hot – sweet-fleshed mantis, like lobster tails minus the body; scallops served with fine glass noodles and chopped garlic; a delicate seafood sauce atop which rests a whole green grouper whose flesh falls off the bone.

Rice comes last. “We always eat rice last in restaurants,” explains Ip. “That way you aren’t filling your guests with rice before the good things come out.” Sounds reasonable to me. 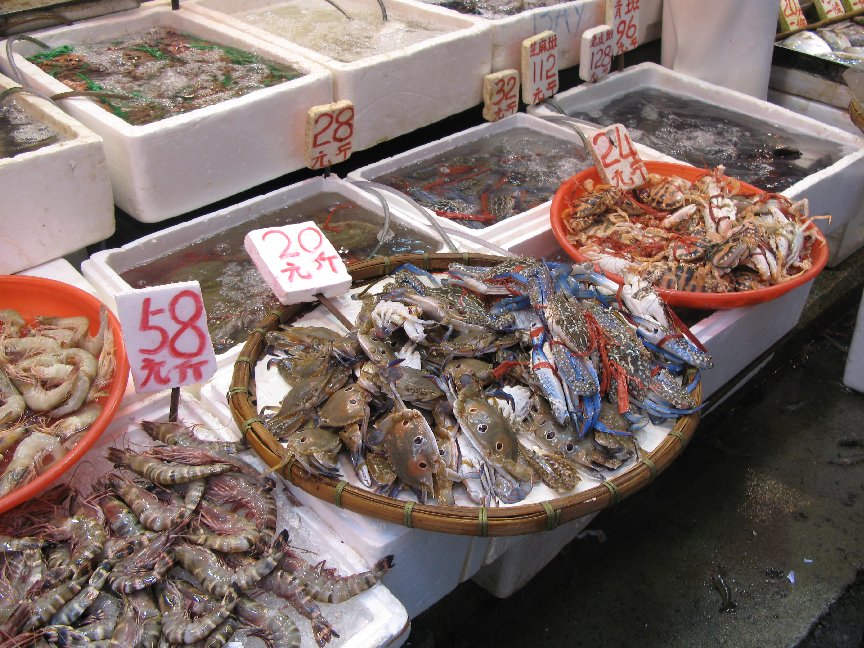 Back on the mainland, there is one culinary highlight I don’t want to miss. At tea one day, I took a bite of what appeared to be a boring bun, only to find a filling of yummy almond paste. Apparently, like my shao lung dumplings, the Chinese like little secrets hidden in the heart of a mundane exterior. Today, I’m going to learn how to make some of those gorgeous little cakes.

At Wing Wah Cake Shop, a small group of fellow visitors and I spend a contented hour or so making wife cakes – little pastries stuffed with sesame or almond paste. The technique for stuffing the almond paste inside the little balls of dough requires some dexterity. But it doesn’t take long before I am capably palming the dough around the little ball of paste, then flattening it. My reward is being able to eat my creations. 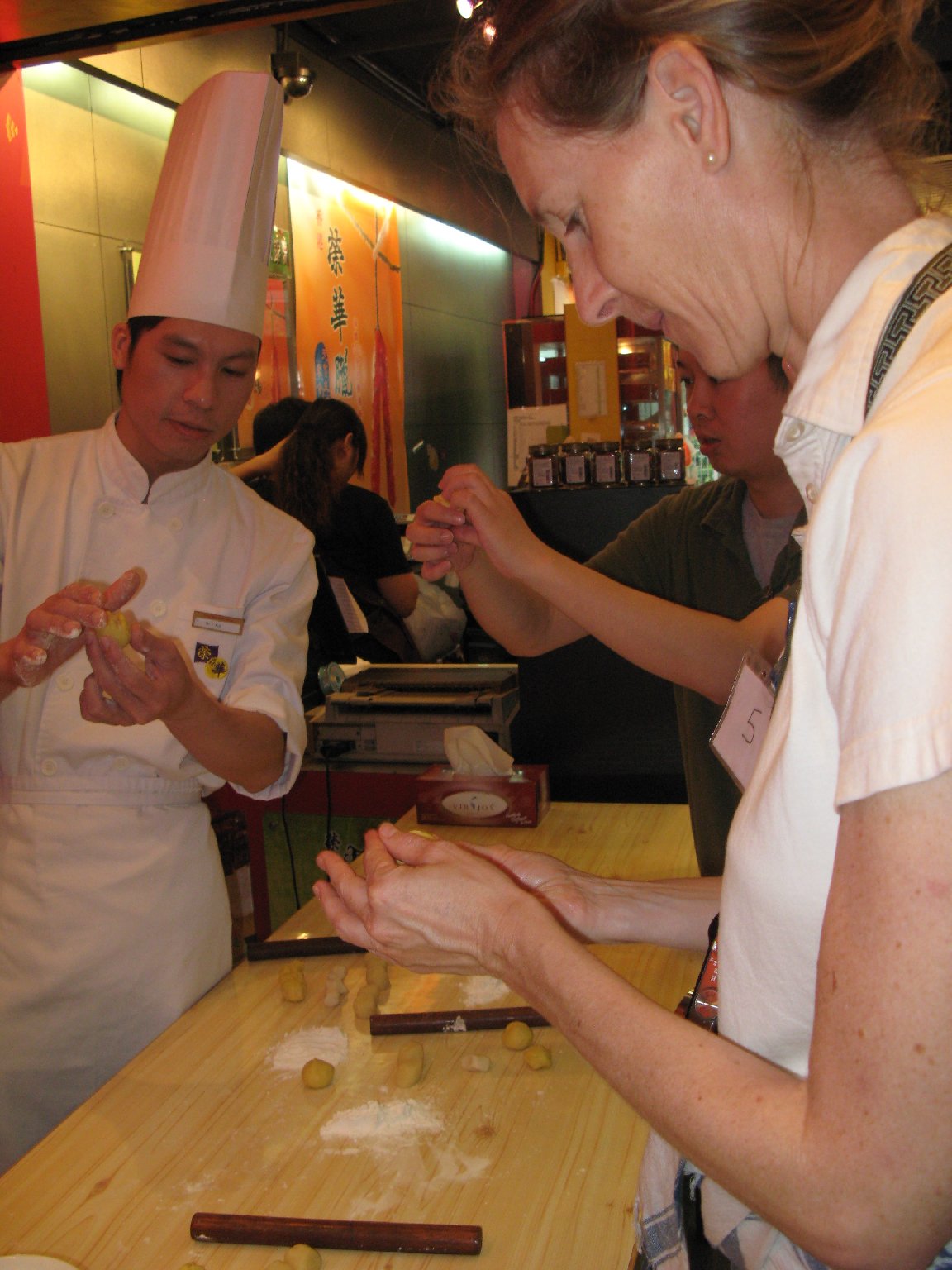 The almond paste can apparently be bought ready made so I go shopping, a very different experience here. Markets abound in Hong Kong and at these one can buy almost anything – clothing, food, jewelry. There is a Bird Market strictly for the purpose of buying songbirds and at the Fish Market, beautiful tropical swimmers are sold in little plastic bags of water.

Denny Ip explains that having a fish in your home is good Feng Shui but the birds are a status symbol. “Once only the very rich had songbirds,” he explains. “See that man? He’s holding two cages near each other to see which birds sings louder. He wants the better bird.” 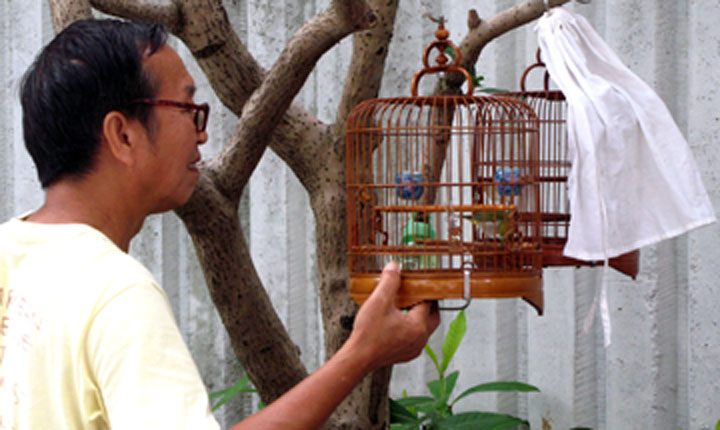 Chinese food markets are mysterious places filled with exotic, unfamiliar foods. I’m intrigued by little shops that sell dried mushrooms, sharks fins, an extraordinary variety of dried beans, and what look suspiciously like caterpillars. They are! Summer grass-winter worm is a Tibetan parasitic fungus that devours the inside of ghost moth larvae, leaving the mummified remains. These are consumed to fight everything from AIDS and cancer to aging. The best of these sell for Cdn$600 for a tail (a Chinese measure equaling 33 gm). 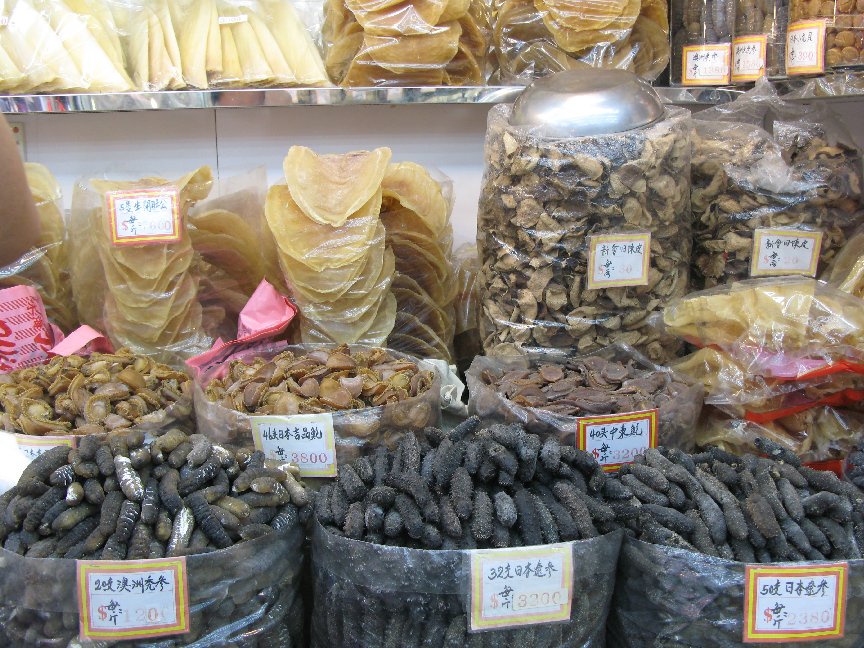 The Chinese have long understood that some foods are good for treating certain ailments (a Western example might be cranberries for urinary tract infections). Angelica roots, Ip explains, are good for the circulation, the Chinese yam for respiration, and wolfberry seeds improve the eyes. It’s a whole new way of looking at food. 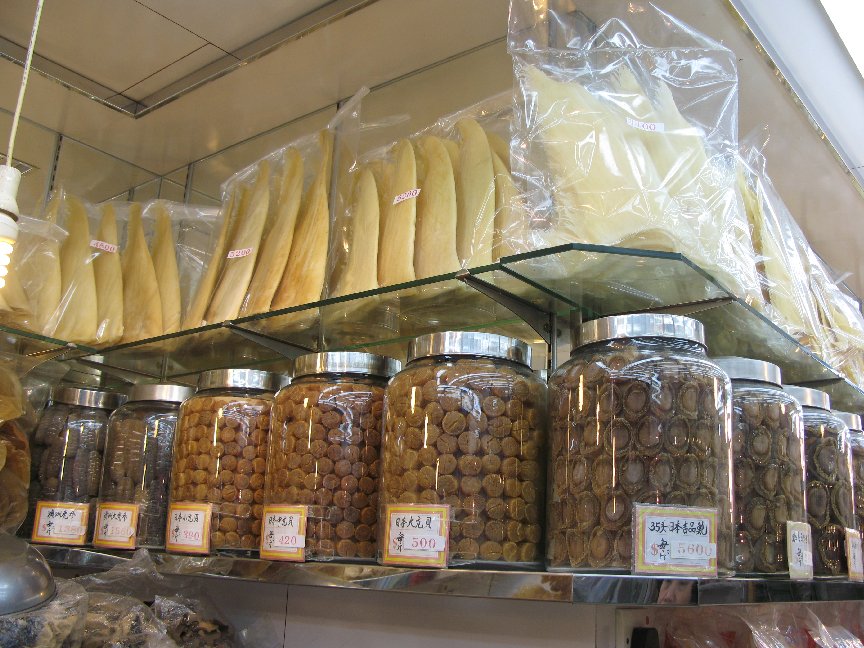 Indeed, a visit to Hong Kong provides a whole new perspective on food and one that I find very appealing. Every meal is an adventure and after all, that must be the highest accolade one can give any dining experience.

Bon appetite or as the Chinese would say, Sihk faahn!