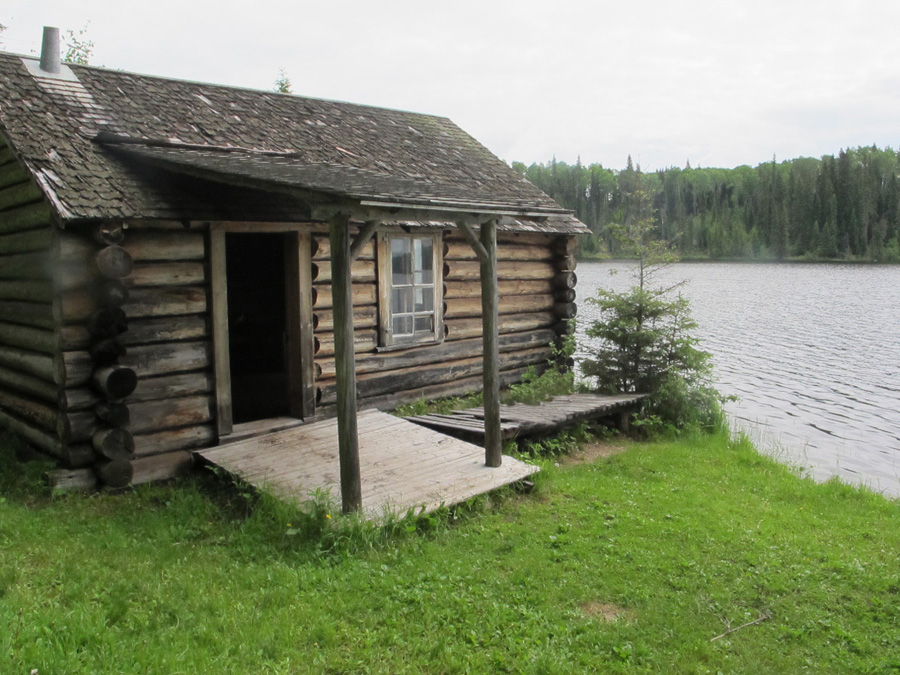 Grey Owl’s cabin, christened Beaver Lodge, stands in a remote part of Prince Albert National Park in Saskatchewan. Inside the beaver lodge of his beloved pets opens into his living space.

Grey Owl was a real person but he was also a legend and hiking to his cabin has become a pilgrimage for many who care about the environment.

I’m standing in mud, and it’s happily oozing right through my mesh sneakers. I can’t believe I wore white socks and sneakers!

I did wear Muskol. But despite copious applications of the repellent, I’m patently providing sustenance for half the mosquito and deer fly population of Prince Albert National Park in Saskatchewan. 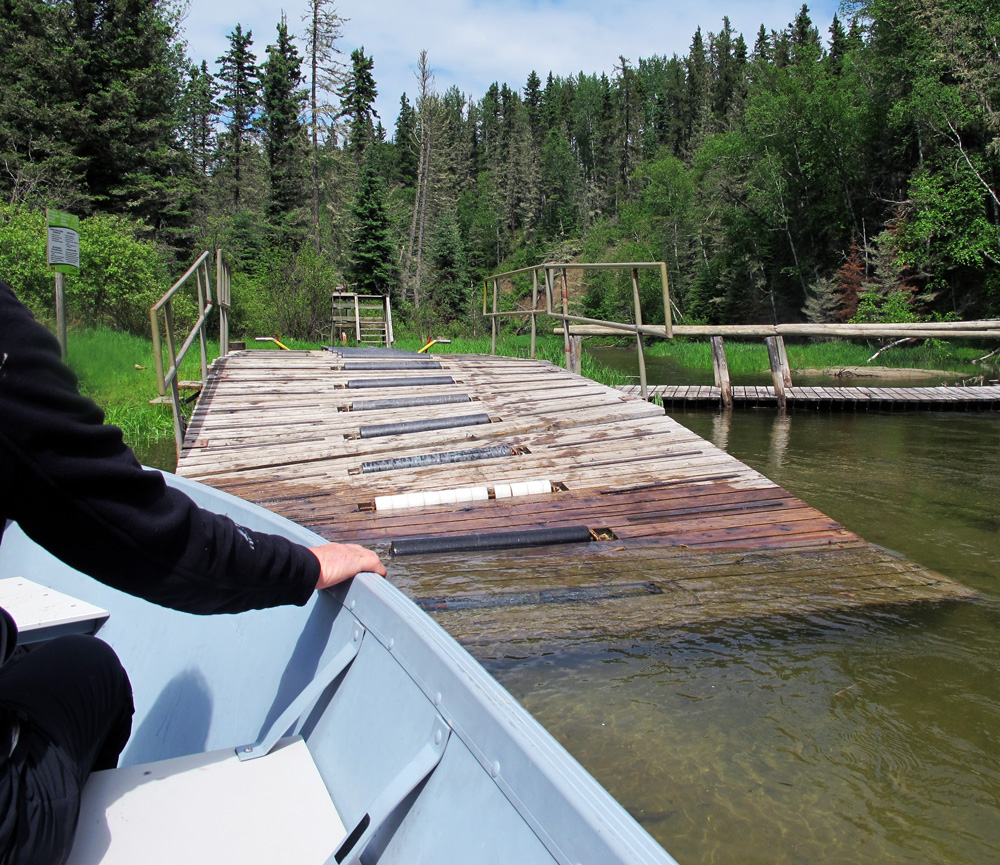 The boat has to be portaged to the next lake.

The sun is shining but days of heavy rain have left the rail portage for our boat a slippery ooze. And a washed-out beaver dam has taken out a segment of the 3.5 km trail through the forest from Kingsmere Lake where we have to leave our boat. 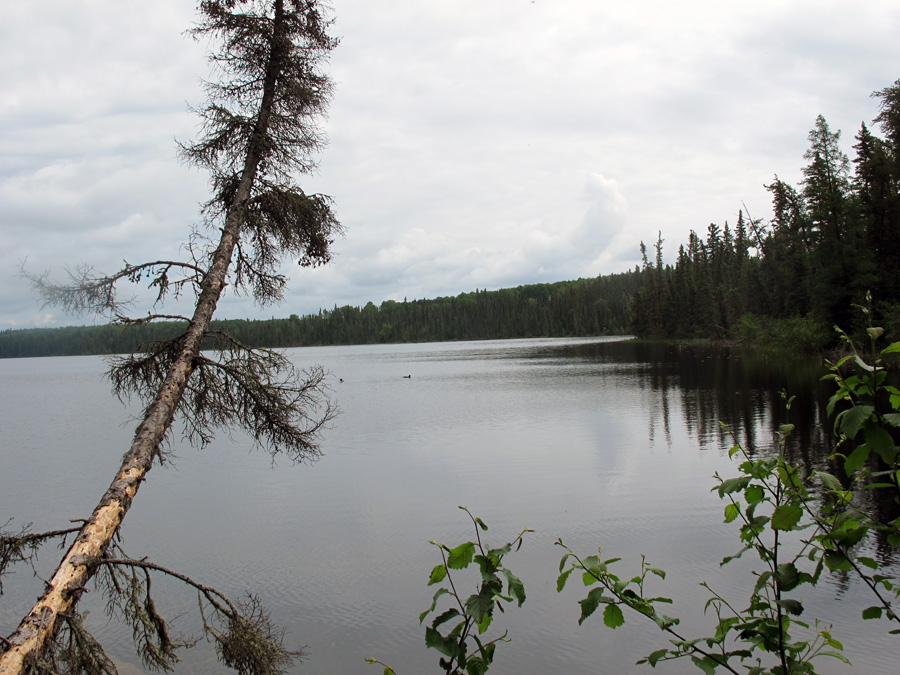 I’m making the same trek hundreds made in the 1930s – to meet a legend. 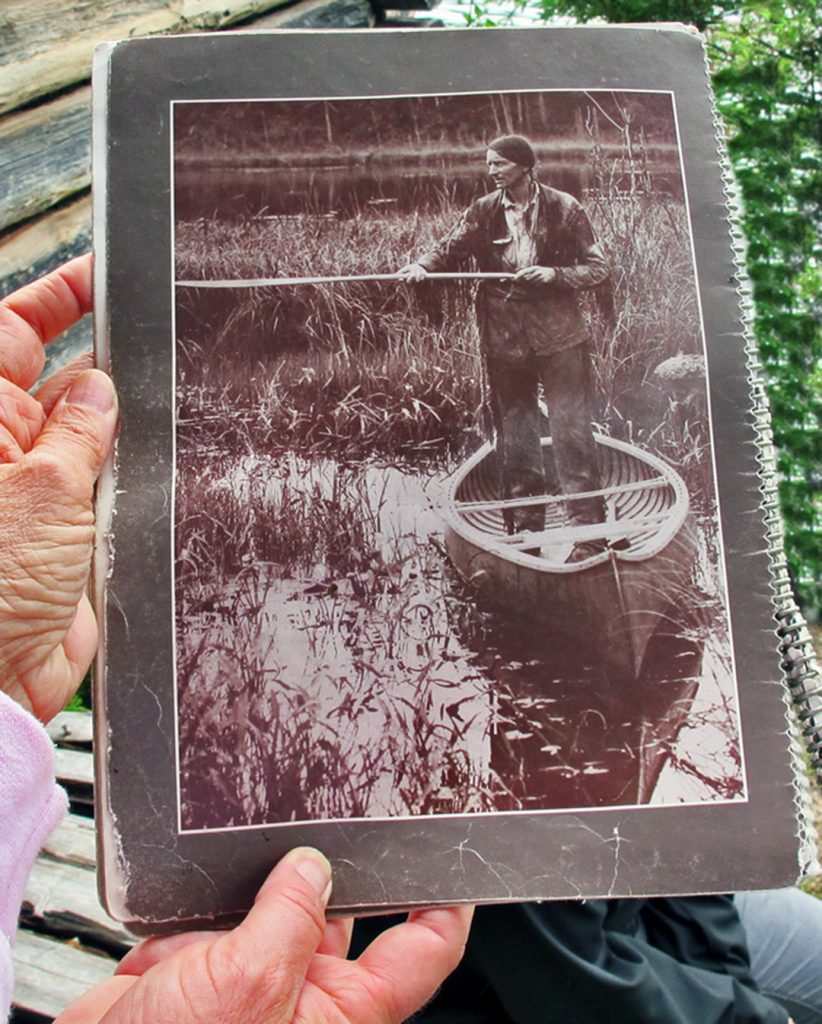 Parks Canada book with photos of Grey Owl is at the cabin.

The enigma that was Grey Owl has fascinated and charmed the world. The first true conservationist, he wrote books pleading the case for the preservation of the wilderness. His books proved so popular that he made speaking tours of England in 1935 and 1937.

He was presented to King George VI, even being permitted to make a grand entrance in elaborate feathered headdress. As he departed, he had the temerity to slap the King on the back and bid him goodbye saying, “Farewell, Brother.” 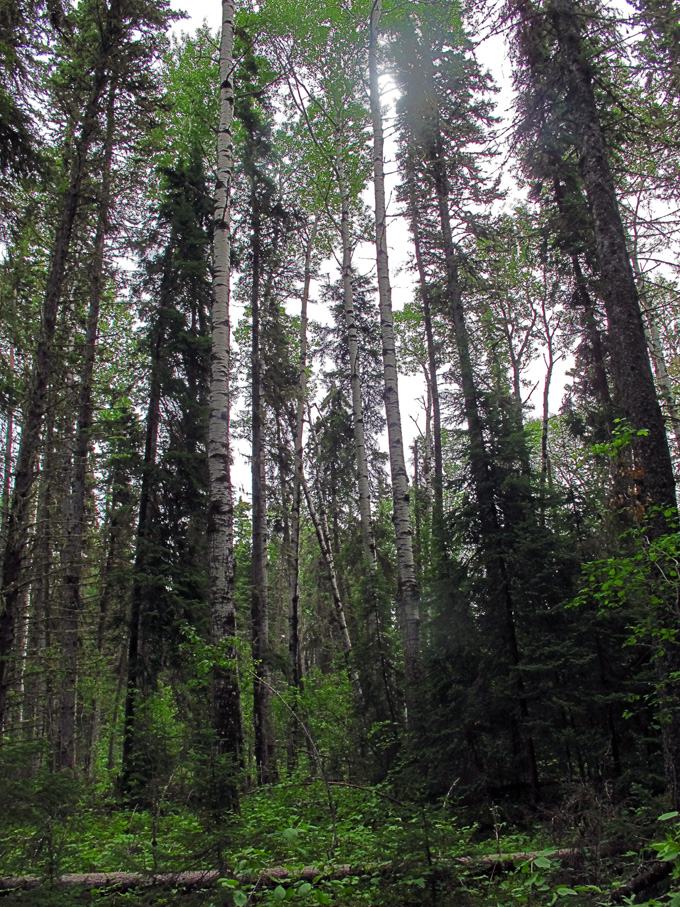 Grey Owl died in 1938, but his message was so powerful, hundreds still trek in to see his cabin and pay homage to the man who cared so deeply about the wilderness.

Most of the trail takes us through pine forest whose scent adds zest to the clean air. 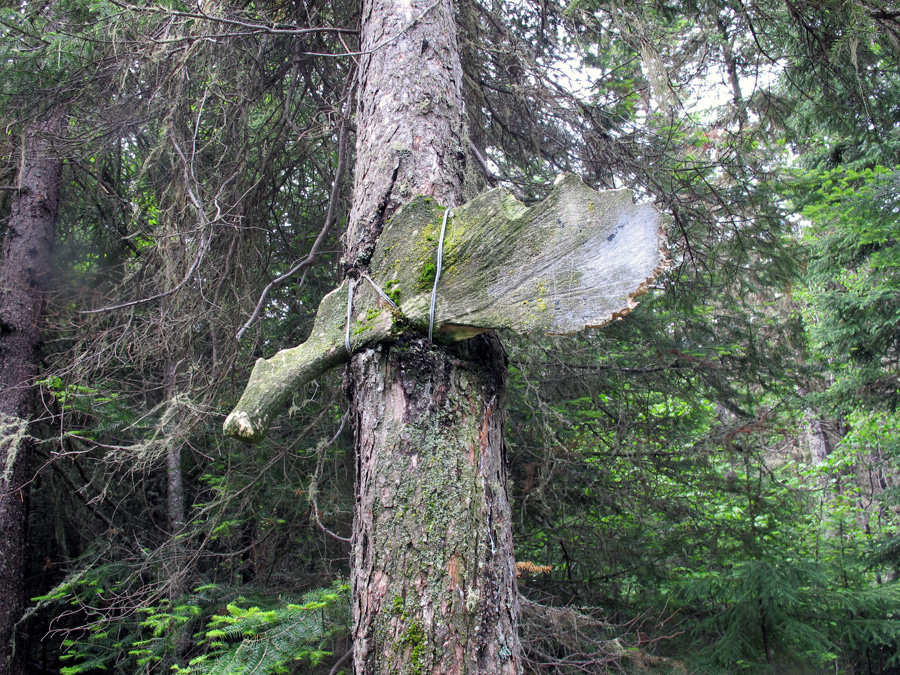 Tacked to a tree, an old moose antler, bleached by sun and wind, points the way. Through the boggy parts of the trail, 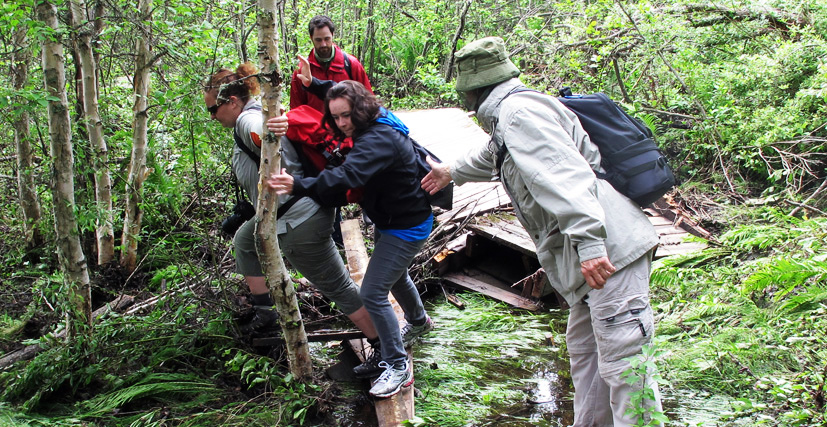 Parks Canada has thoughtfully provided small stretches of boardwalk and it’s one of these that has washed out, necessitating a precarious teeter across a narrow length of wood.

Nonetheless, muddy and moist, I couldn’t be more delighted. 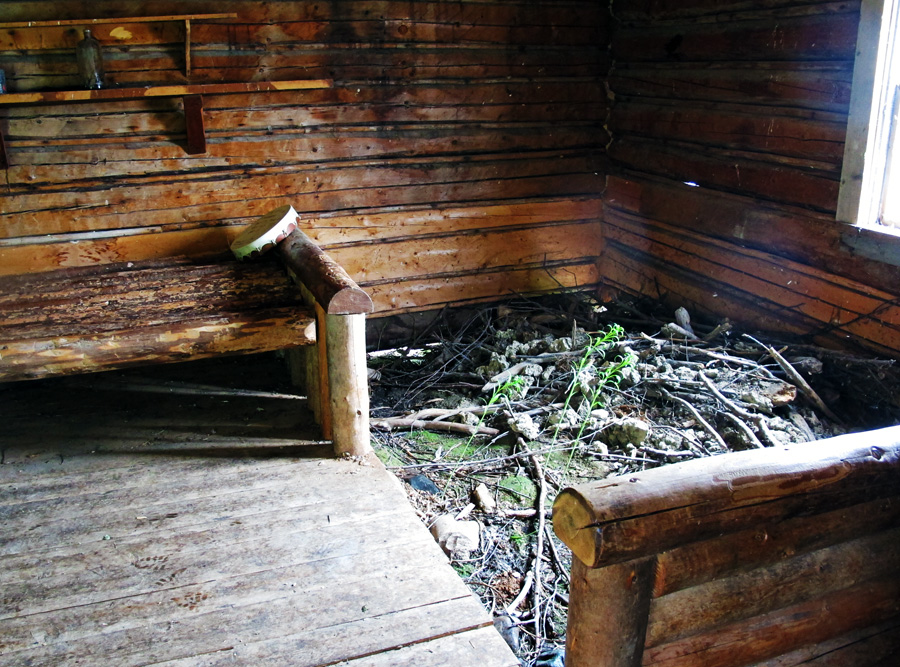 I’m at the cabin – christened Beaver Lodge – constructed by Grey Owl on Lake Ajawaan, complete with built-in beaver dam through which his beaver buddies, Jellyroll and Rawhide, could enter and play. 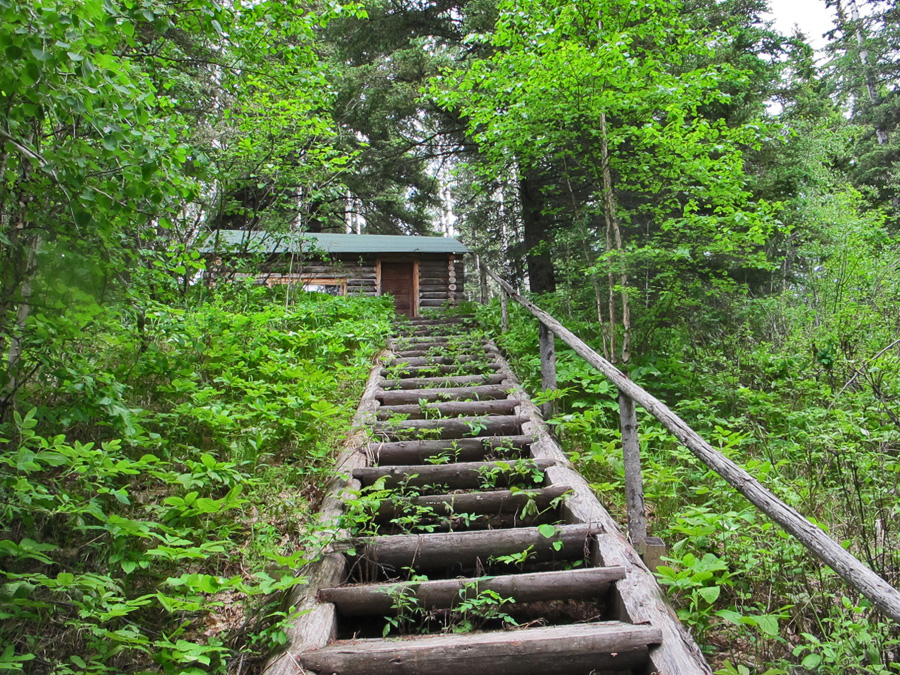 Anahareo’s cabin up the hill was built so she could sleep at night. Beavers are nocturnal.

Up a small hill is a second cabin, to which his wife Anahereo escaped so she could get some sleep. Beavers are, after all, nocturnal – and according to Anahereo, smelly – so make poor housemates. 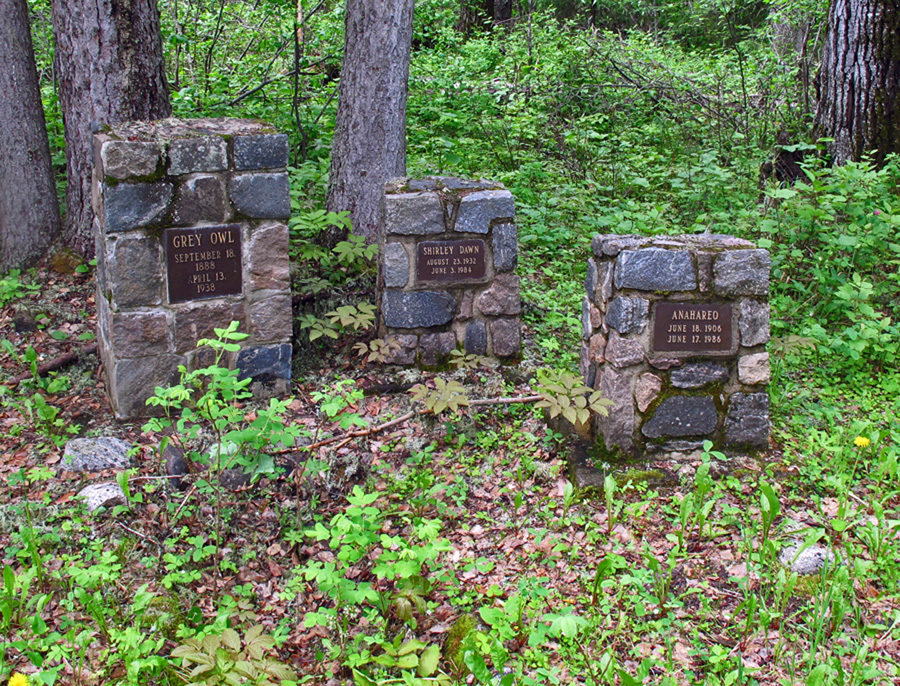 Three graves up the hill from the cabin

Also at the top of this hill are three cairns where Grey Owl, Anahereo and their daughter, Shirley Dawn, rest in the shade of the forest they loved so well.

But Grey Owl was a womanizer, an alcoholic, and a fraud. Born Archibald Belaney in 1886 in Hastings, England, he was early abandoned by his father and raised by two maiden aunts. At age 17, Archie emigrated to Canada and quickly found a new family among the Ojibway people, becoming fluent in their language.

After a stint in the British Army during World War I, he returned to Canada and thereafter began his full migration – from civilization to wilderness and from Englishman to supposed half-caste, born of Apache mother and Scottish father. 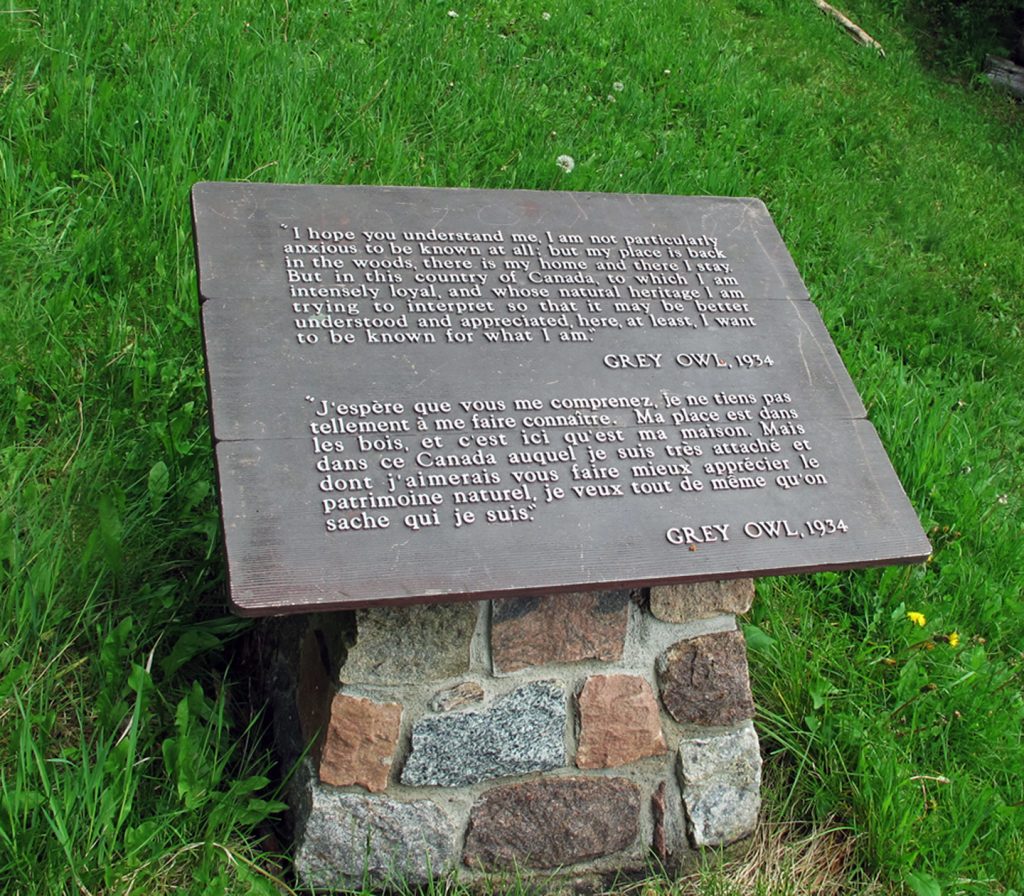 His long braids and buckskin were the outer trappings of a heart that had been touched by native wisdom – the idea that you take from nature only what you need without destroying it. He wrote, “Almost always he (the white man) extorts far beyond his own needs, destroying without thought for the future – the parasite supreme of all the earth.”

During the course of his brief life he ‘married’ five women, never divorcing any of them. Anahereo seems to have been the most enduring. He had several children – three daughters and one son – though these numbers are by no means certain and all his relationships remain something of a mystery. Indeed, there are many mysteries associated with this remarkable and unfathomable man. 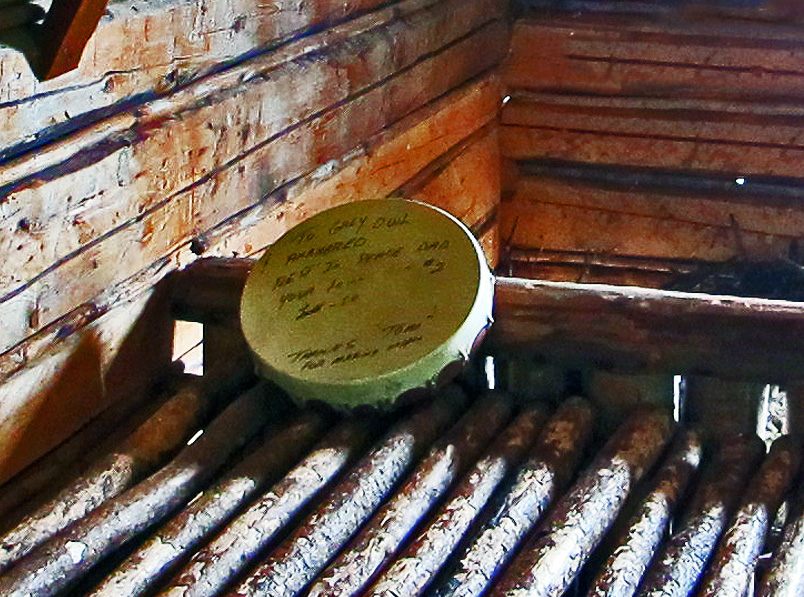 The drum left in the cabin – but who left it there?

At the cabin today, little changed except that the beaver dam has long been abandoned, I examine a native drum carefully placed on his bed. On it are the words, “To Grey Owl, Anareheo. Rest in Peace Dad, your second son.” No one knows who left this here and what it means. Another small mystery? A hoax? 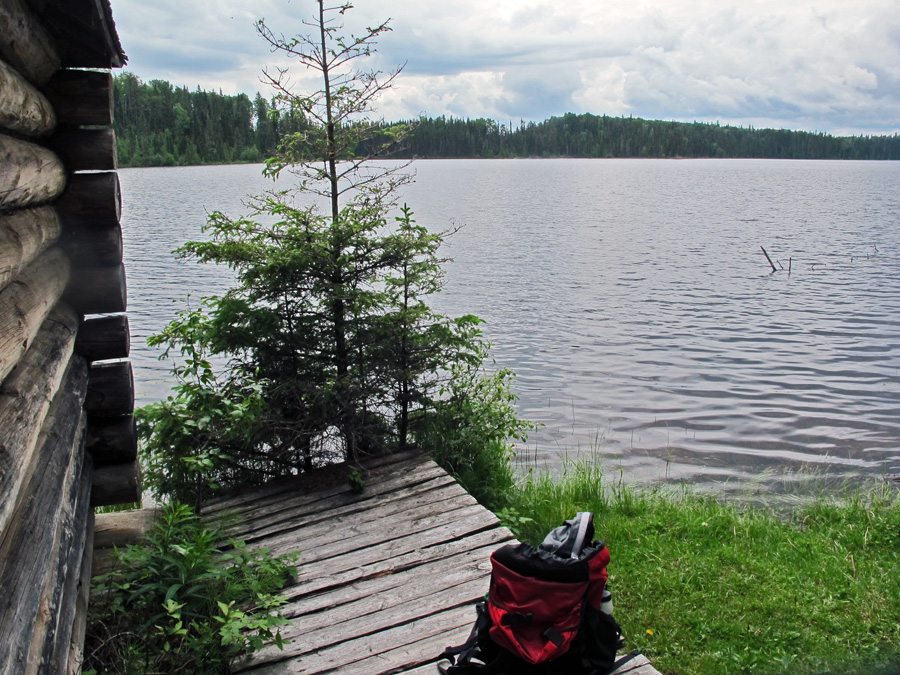 Grey Owl worked as a ranger for Parks Canada and he was happiest in his beloved cabin on Lake Ajawaan, where he spent his nights drinking and writing his books while the beavers carried on their dam building activities. Margaret Winters, who typed the handwritten manuscripts, described her difficulty deciphering his writing which slowly deteriorated as the long night’s drinking wore on.

Nonetheless, he wrote three best-selling books while in Prince Albert: Pilgrims of the Wild (1934), a children’s book called Sajo and Her Beaver People (1935) and Tales of an Empty Cabin (1936). These and the films about him and the plight of the beaver helped to promote his message of conservation. 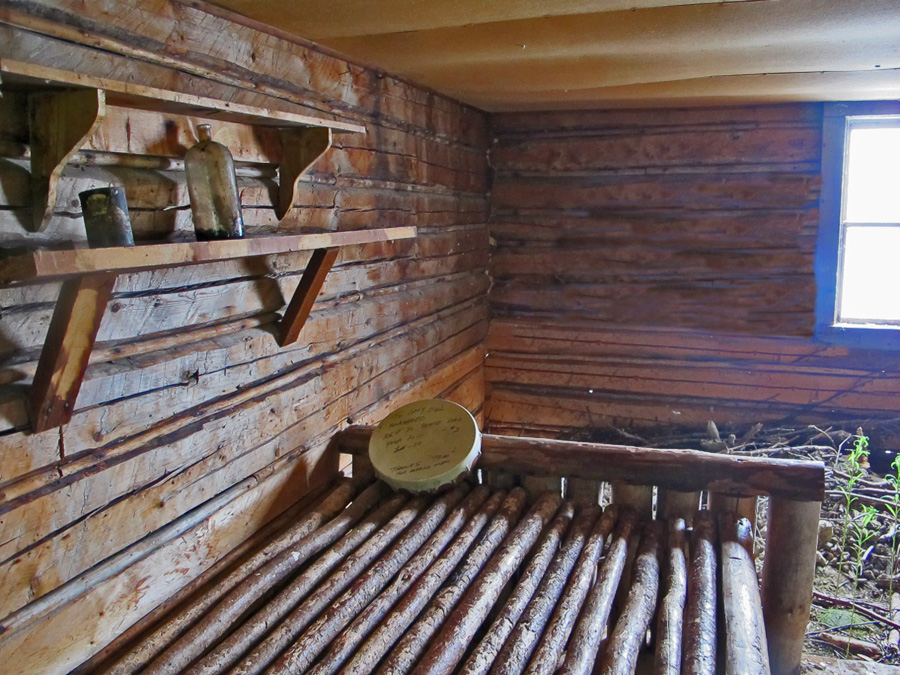 The Interior of Grey Owl’s cabin

Grey Owl died of pneumonia in his beloved cabin in April 1938. His frozen body was found by two rangers searching for news of him in the dead of winter. And herein the mystery continues.

Some say Grey Owl’s body isn’t, in fact, under the cairn bearing his name. The ground was still frozen and hard, and some have suggested that the two rangers, finding it impossible to dig, actually consigned him to the cold water under the ice of Lake Ajawaan. Both wardens have long since passed on, taking the secret of his resting place with them. 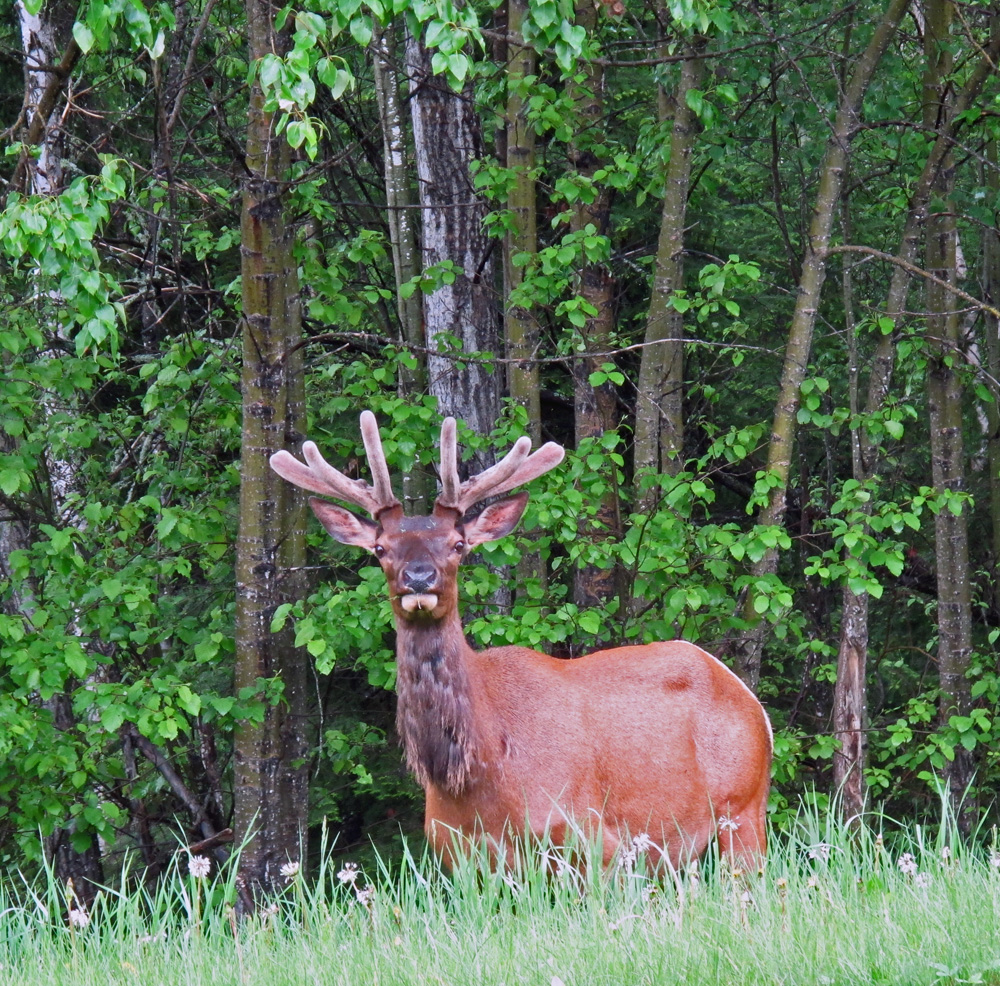 A young stag watches our progress by the road. Protecting wildlife was Grey Owl’s mission and is part of the mandate of Parks Canada.

Sadly, after his death, the facts of his life were revealed and served to discredit not simply his name, but also his work. His message was simple: “Remember you belong to nature, not it to you.”

But in recent years the trek into his cabin has once more become something of a pilgrimage for those for whom his message once more resonates, those who understand that we are slowly losing the wilderness, and once lost, it may never be found again.

The Shooting Times of April 30, 1938, probably said it best in their obituary: He was not they say, a real Indian. So what?

Info:  The trek to his cabin can be made two ways:

Waskesiu is a pretty town in the heart of Prince Albert National Park in Saskatchewan. A fascinating museum about the area is run by volunteers during the summer months.