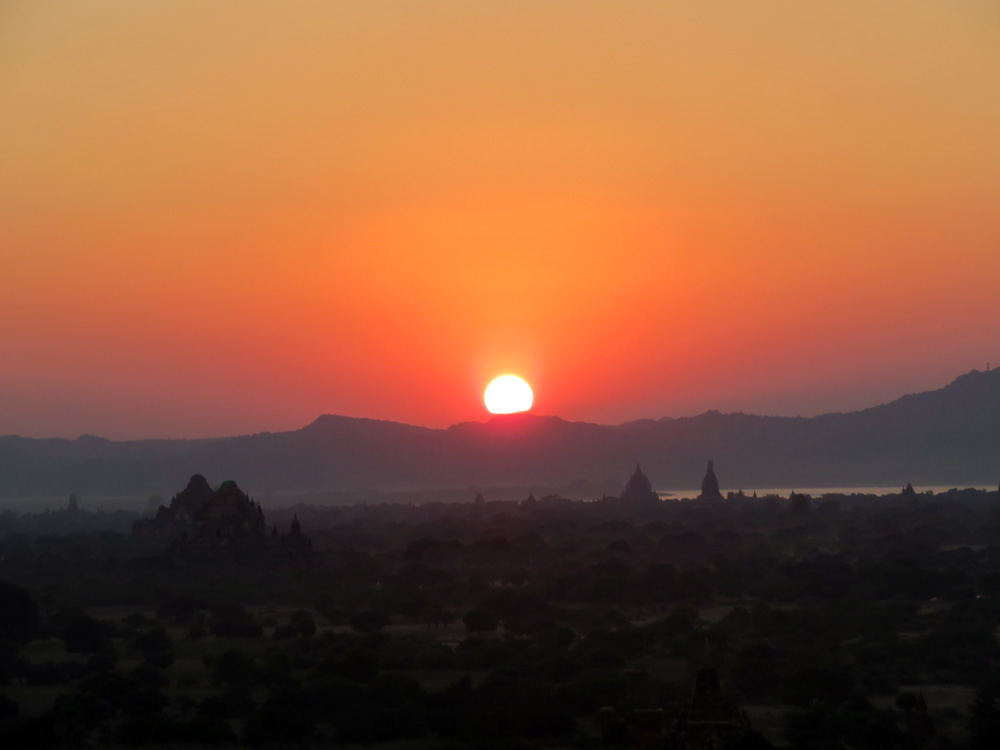 The sun sets over 2000 stupas in Bagan

The sound of a giant egg beater makes me look up from my book. And it looks like that’s exactly what is attached to the little boat dashing past on the busy Ayerawady River. Our vessel, the Amapura, an elegantly appointed cruise boat, attracts enthusiastic waves from every passing craft.

Children wave from what we called an egg beater boat

I toss aside the book. I am doomed to read only a dozen or so pages during my two-week cruise; there is just too much to see and do on this river. Every bend brings tiny villages, each with its pagoda shining in the sun. This is, after all, Myanmar, a devoutly Buddhist country. 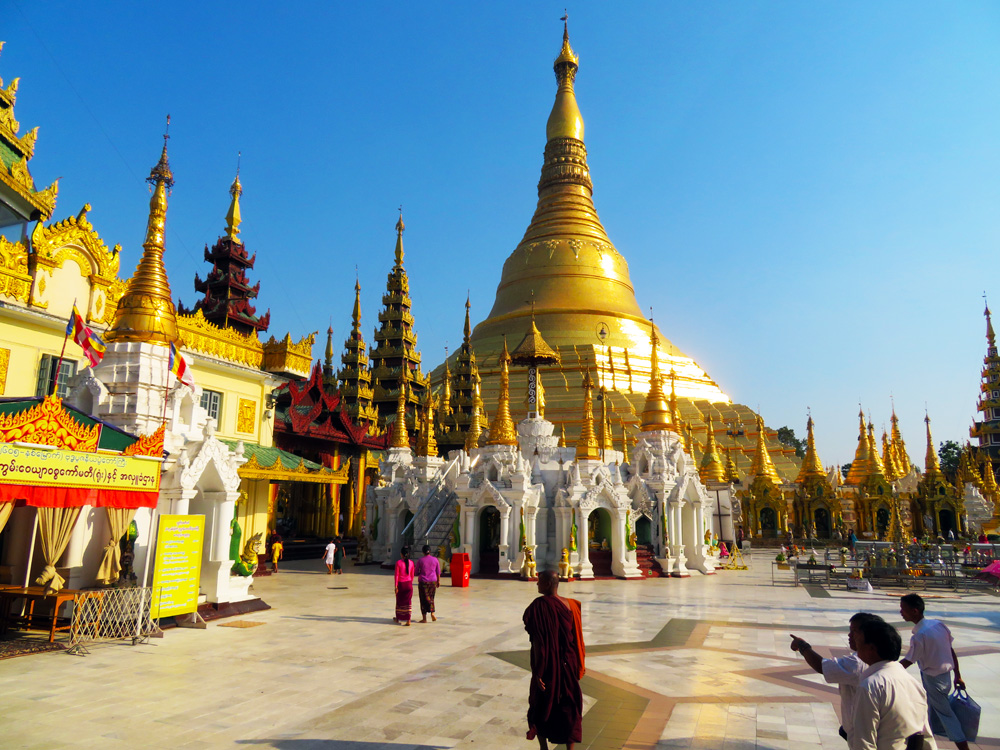 The relentless sun shimmering on gold temples, the inevitable dust and sand at the end of the dry season, the difficulty of coping in a language so foreign to me that even after a week, I can’t easily remember simple phrases – these are the impressions I have taken away.

And then there are the people

Myanmar has been closed to the world for decades, run by a military junta. Now, after only a few years open to the world, its people are charmingly unworldly. A smile readily brings one in return. After two days my halting attempt at a greeting becomes more confident. “Mingalabah,” I say (it means hello, good day, good evening) and they immediately respond in kind. 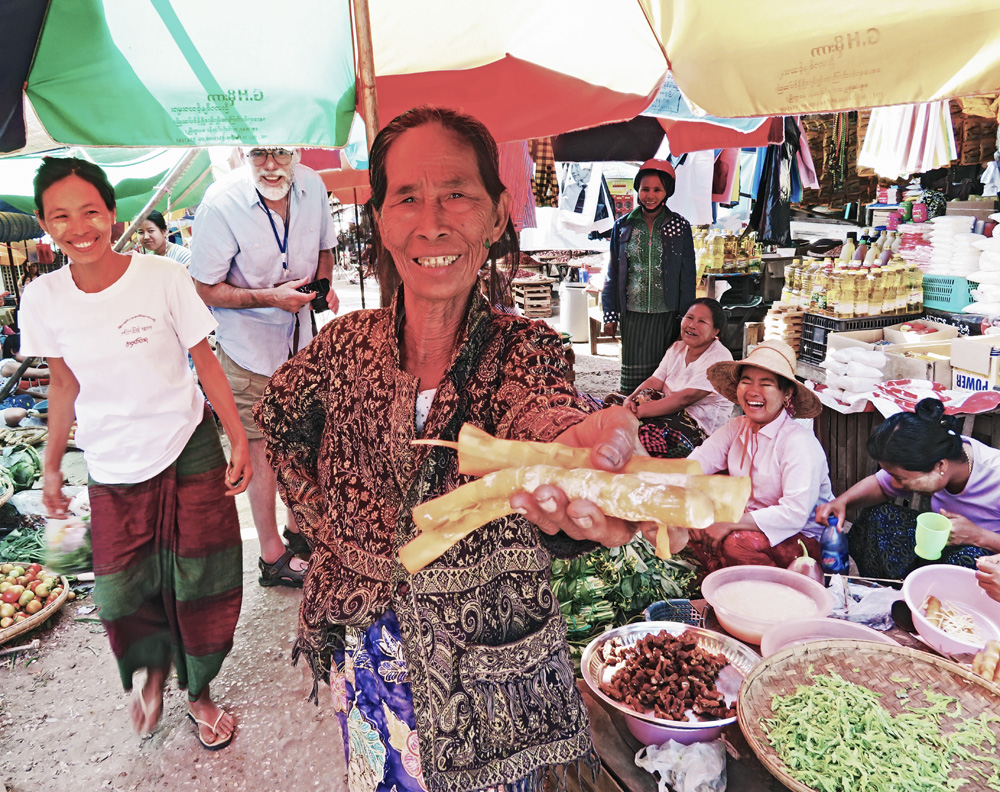 In one market, my curious look at the plate of food one lady is eating, brings an immediate smile and an offer to share it with me. These people share their food with beggars and the Buddhist monks who every morning make the rounds with their bowls to collect food for the midday meal. There is an extraordinary generosity of spirit. 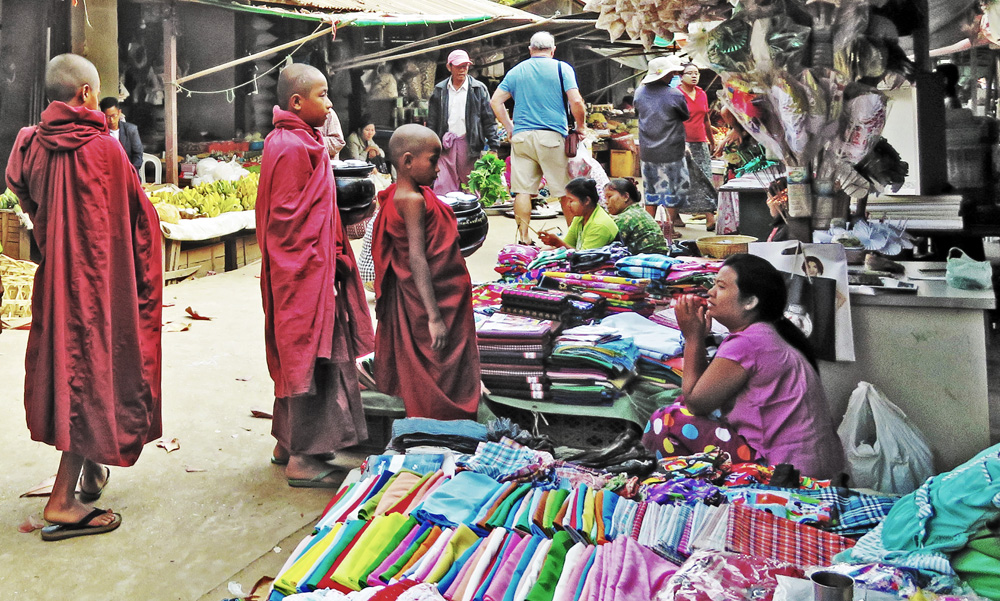 Everyone is keen to help but when I offer a tip to store keepers for spending so much time assisting me, they refuse it. And twice, my accidental overpayment had a market stall holder chasing me to give me the money back.

There are distinct advantages in viewing Myanmar from aboard this Amawaterways riverboat. Over two weeks, we stop at important sites like Bagan, Sagaing, Inwa, Pyay, and more, as well as villages we might never see any other way. 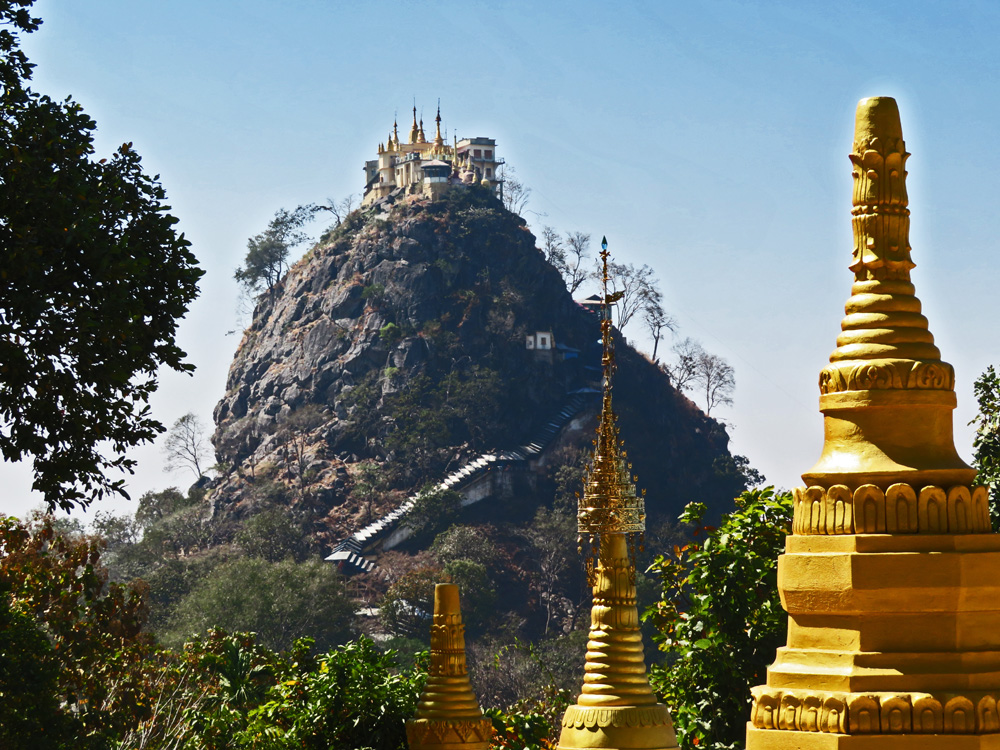 In Bagan, we walked barefoot to the top of Mount Popa and earned the Buddha’s blessing

Myanmar is a poor country with limited hygiene and unreliable public transport. Getting around this country isn’t easy. The buses are slow on badly paved roads, the trains are slower, stopping frequently. And having encountered the driving in Mandalay and Yangon, I can safely assert that this is not an option for any sane person. Bad driving is further complicated by the fact that though they drive on the right, most cars have right-hand steering wheels. 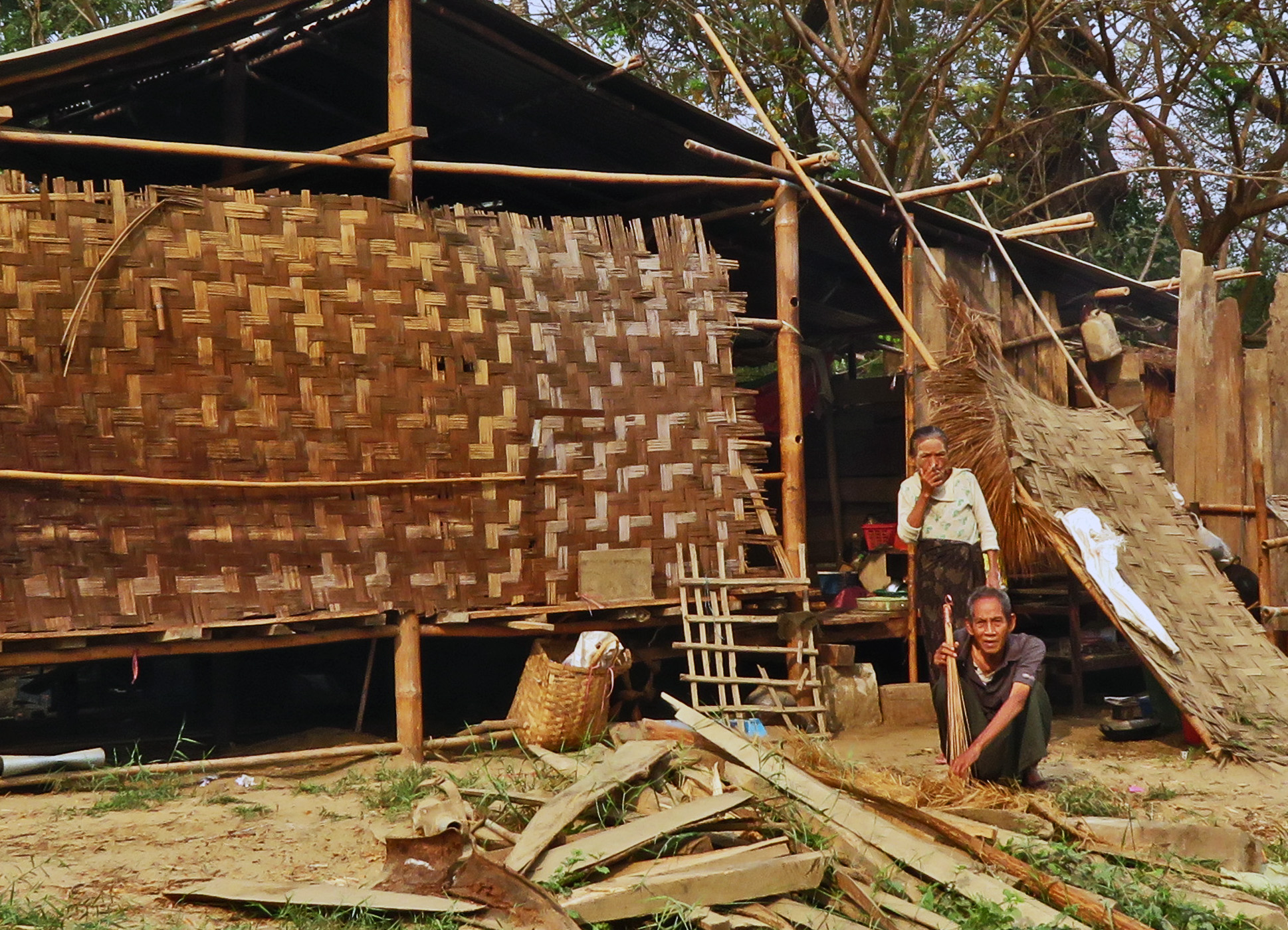 The safety and confidence in hygiene aboard the ship is another significant advantage. But this cruise also offers a chance to see this extraordinary country from a unique perspective.

We visit the traditional historic spots like the magnificent Ubein Bridge, seeing it – and the people on it – silhouetted as the sun sets. In fact, sunsets in this dusty country are always spectacular. 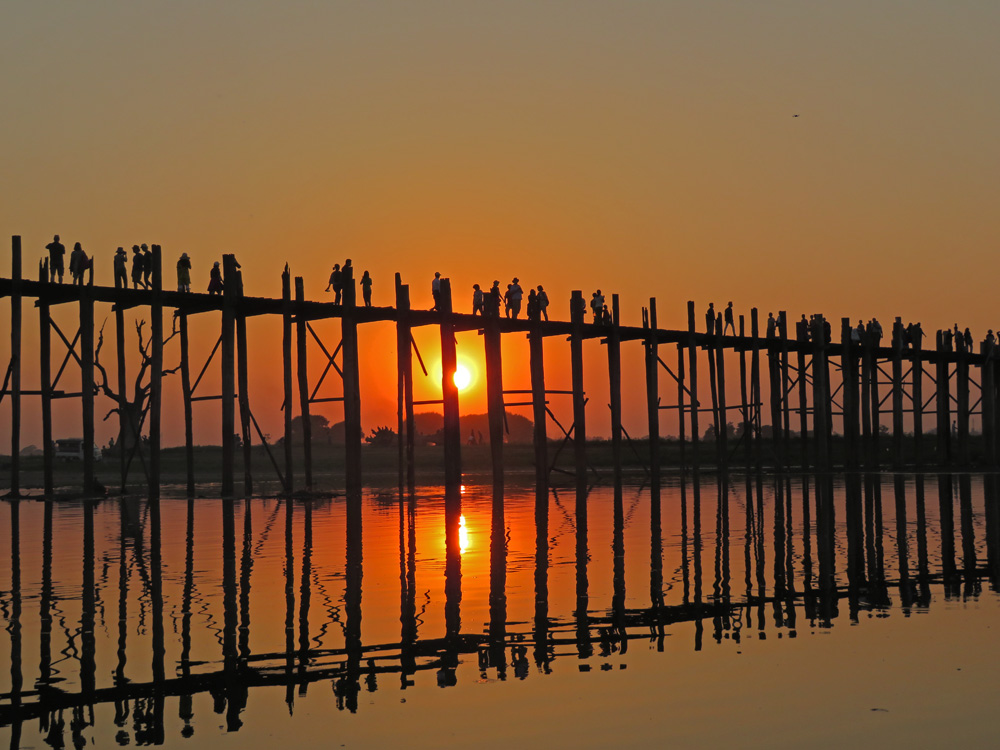 But Amawaterways also takes us to schools, where we meet the students and the Buddhist monks who teach them. In one school, we taught the children a typical song: If you’re happy and you know it, clap your hands. They responded by singing their own version in Burmese, with different actions. Here too, we saw generosity. We gave the children books, coloured pencils and such. One little boy was given two things and promptly turned to share one of them with another child! 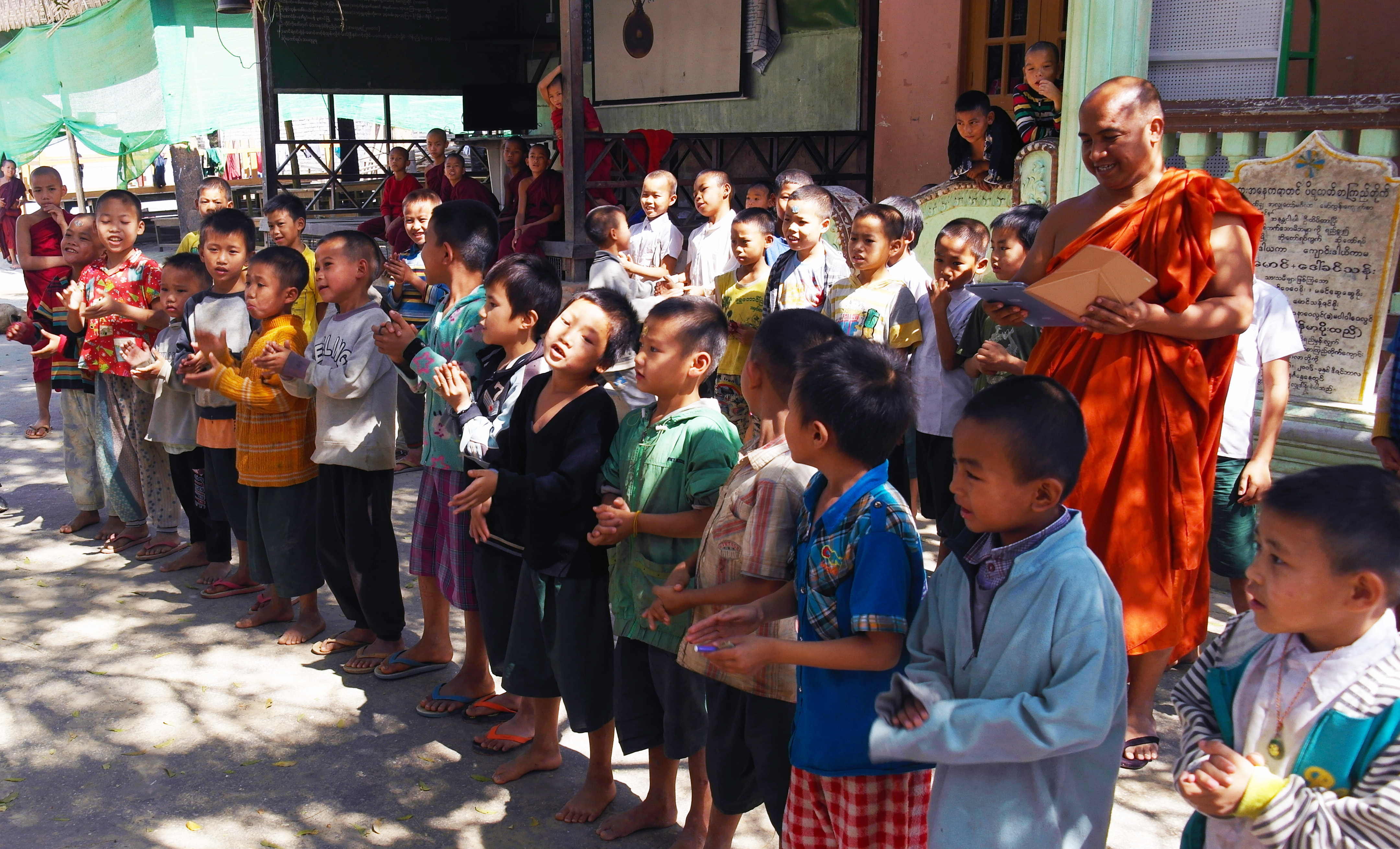 At some stops, a trishaw (bicycle propelled rickshaw) or a tuktuk (an open backed motorized rickshaw) or even a horse and cart might be waiting to take us to our destination. But I like walking best because the encounters along the way are genuine. 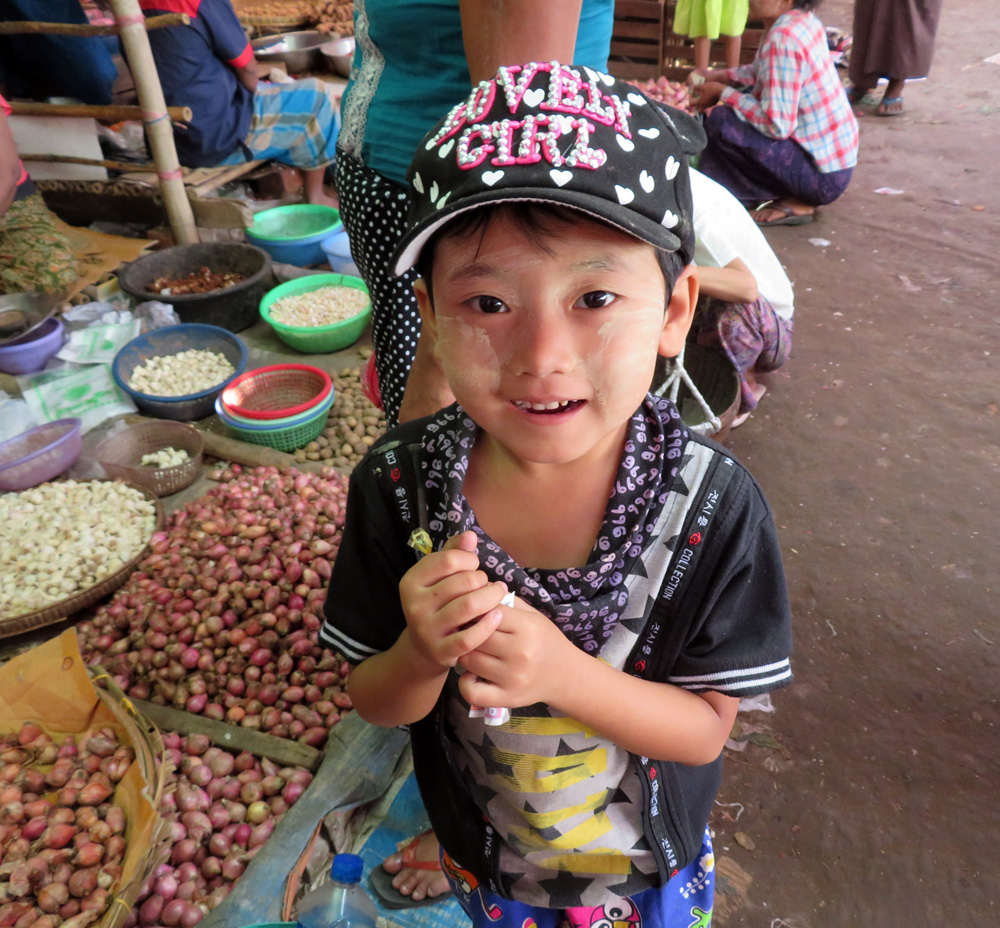 My favourite stops are at the markets in each town where smiling people greet us. And although one tot burst into tears at sight of me, most children are delighted when we respond to a high five. 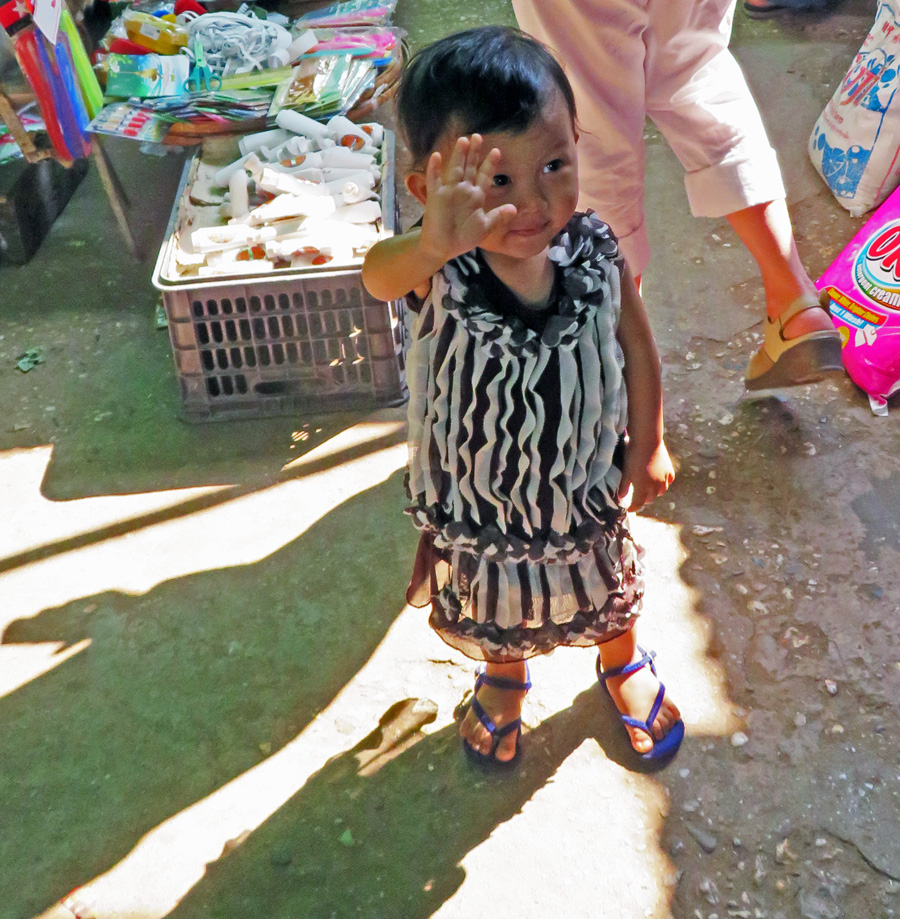 When did this uniquely American gesture become universal?

Some things are only visible from the water. A good example is Customs Hill, so named because it was the point where taxes were collected as boats moved along the river. 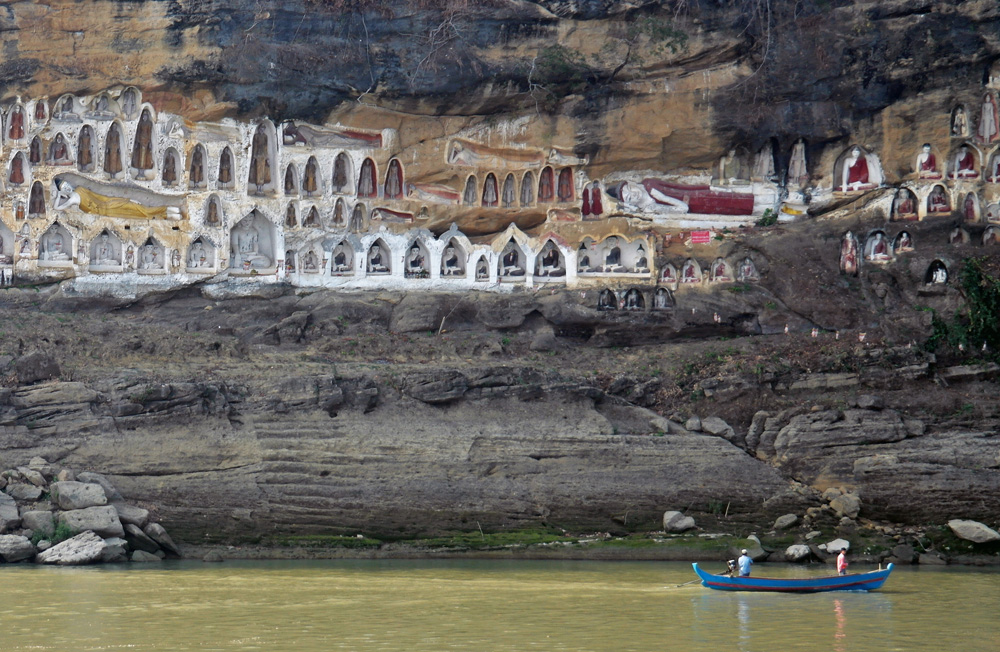 Often having to wait for several days for their turn to be assessed, the boatmen spent their time carving enormous Buddhas into the cliffs along the river as a prayer for good fortune (and perhaps a lower levy?). 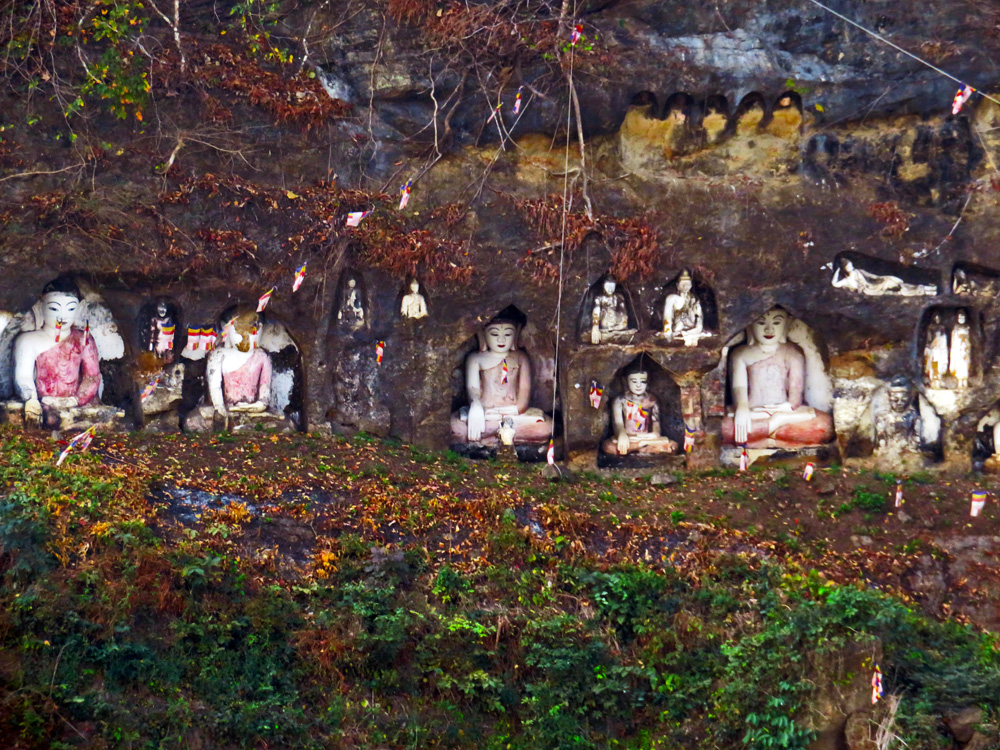 Closeup of some of the Buddhas

These dozens of breathtaking figures can only be truly appreciated from the water as they decorate a long stretch of cliffs alongside the river. I can’t help but compare the Buddhist version of graffiti to our own!

Myanmar is a country that repays closer inspection. Its people are poor in the things most of us count as valuable, but rich in kindness and generosity. How can one resist?

A footnote: Myanmar has many faces. The years of military rule and the recent genocide of the Rohingya in the North stand in stark contrast to the peaceable, kind people we met. It’s hard now to exhort others to visit a country committing such atrocities, but it must be remembered that this country is still run by a military that maintains a firm grasp on the democratic process. Here’s a post I added just after I returned. It’s about the people of Myanmar.

1 thought on “Cruise the Ayerawady in Myanmar”