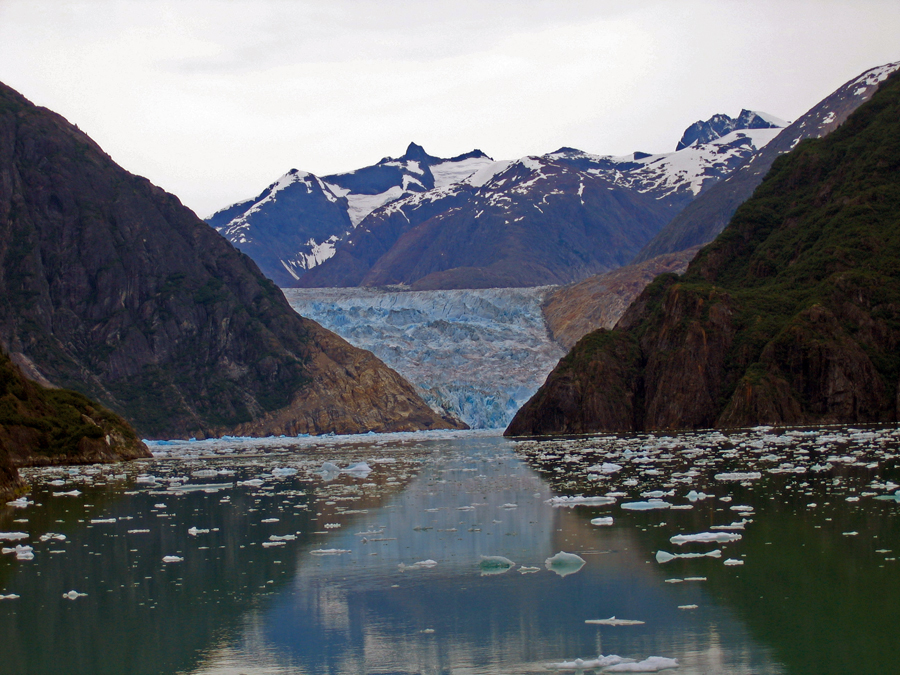 Spectacular views of glaciers right from the comfort of your ship.

A relative neophyte to cruising, I wondered why on earth anyone would want to see Alaska from a cruise ship. The scene above is why. Yes, Alaska has glaciers to climb, lakes to paddle around, and vistas to be seen from mountain peaks. But I managed to do all these things as well, leaving the comfort of my stateroom aboard Holland America‘s  Volendam for each day’s excursions. I loved my cruise to Alaska and no, I wasn’t paid to say that. I paid my own way.

The weather was rainy but the rain made the views that much more dramatic. 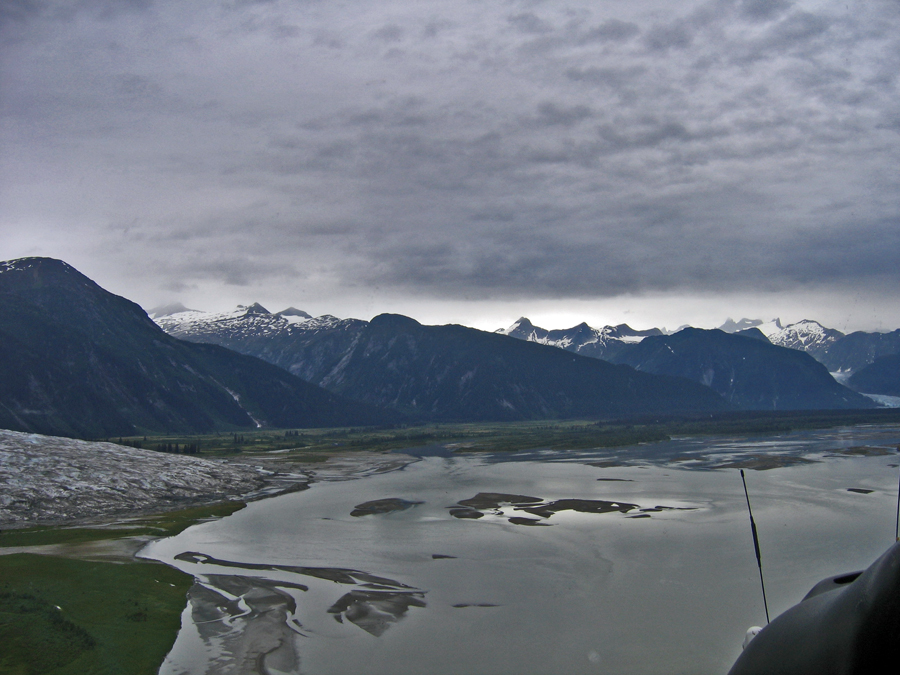 It cleared a little in Juneau, enabling our excursion to the glaciers. .Skipping through the sky in a helicopter through mist and cloud is wonderfully dramatic. 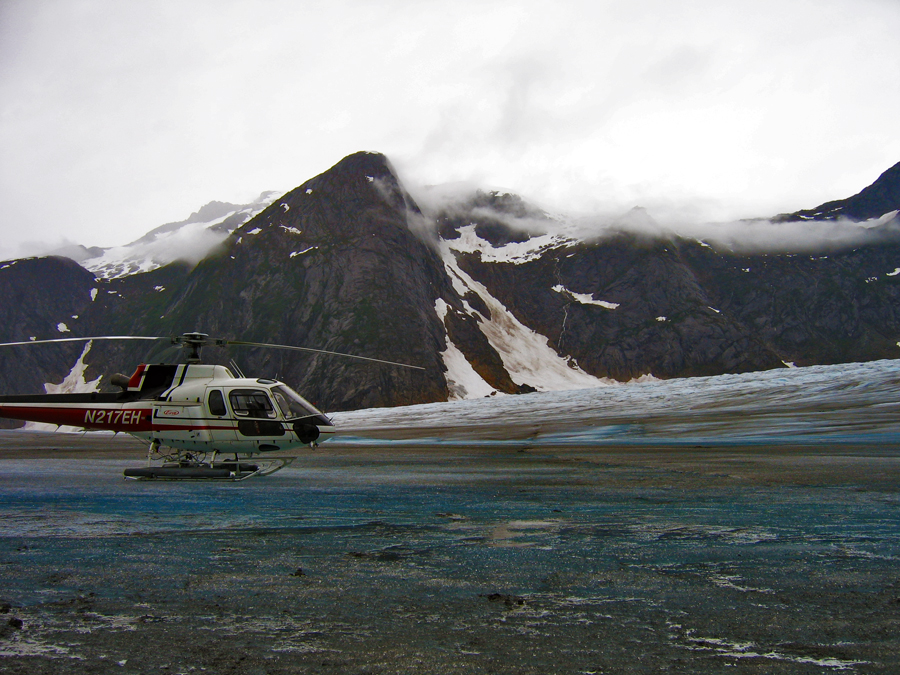 We landed on a glacier and hiked to find some places where the glacier had given way to crevasses and we could see the unbelievably blue water flowing underneath. 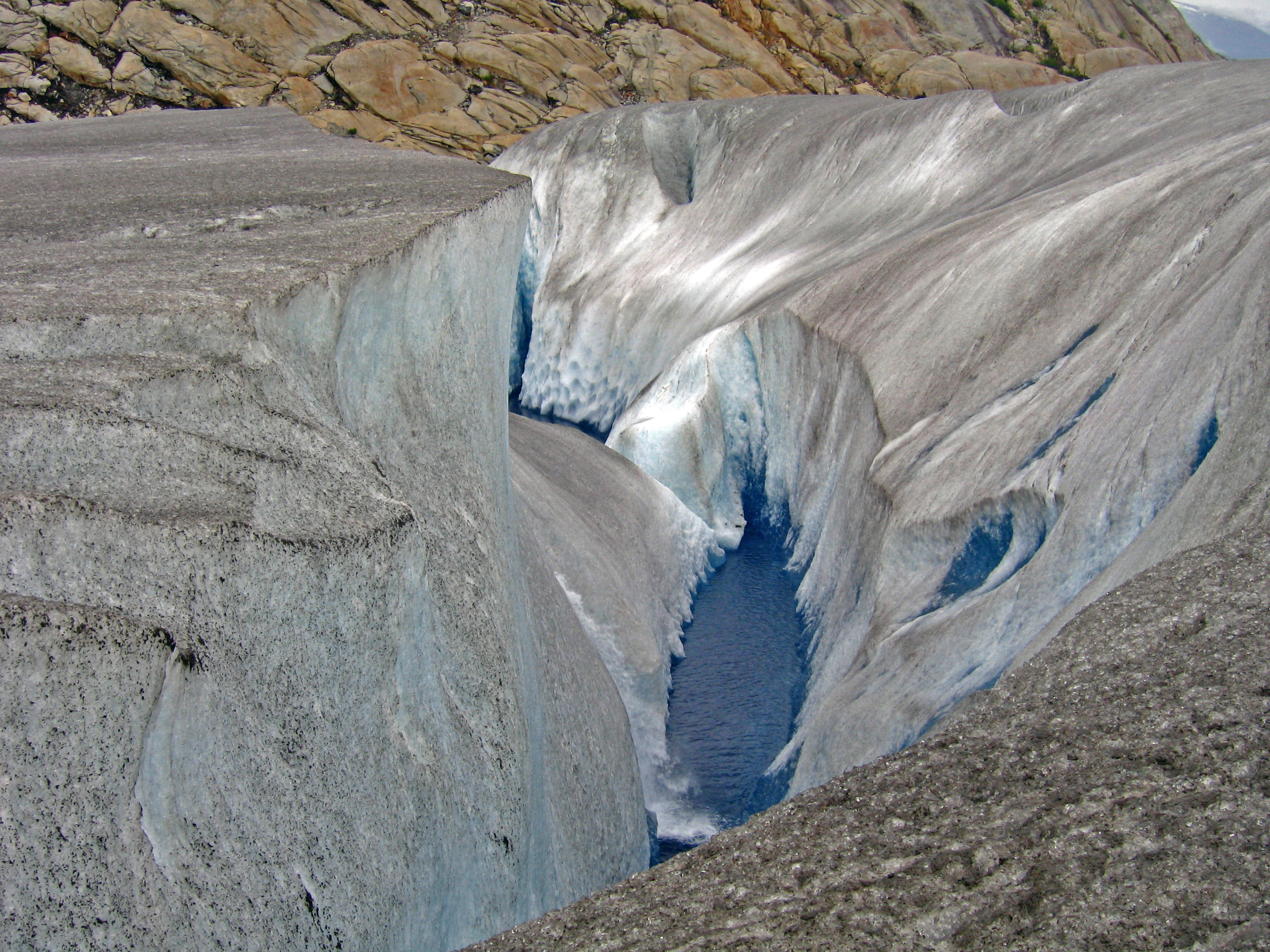 It was cool outside so we bundled up. But our helicopter pilot’s jacket provided a lovely contrast to a blue and brown landscape. 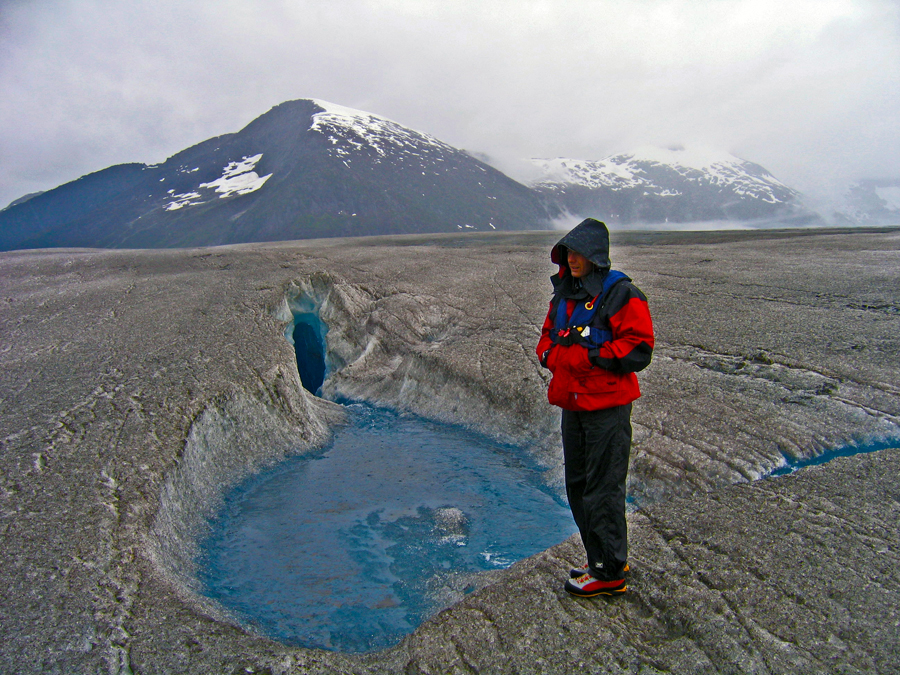 At a spot where the glacier had recently calved – a part of it crumbling away into the water – the open scar shows a bright glacier blue as do some of the floating pieces. We actually watched this process of calving ( an odd word which refers to a cow having a baby) from the deck of our ship as well. It happened several times as our ship moved through the Inside Passage of Alaska. 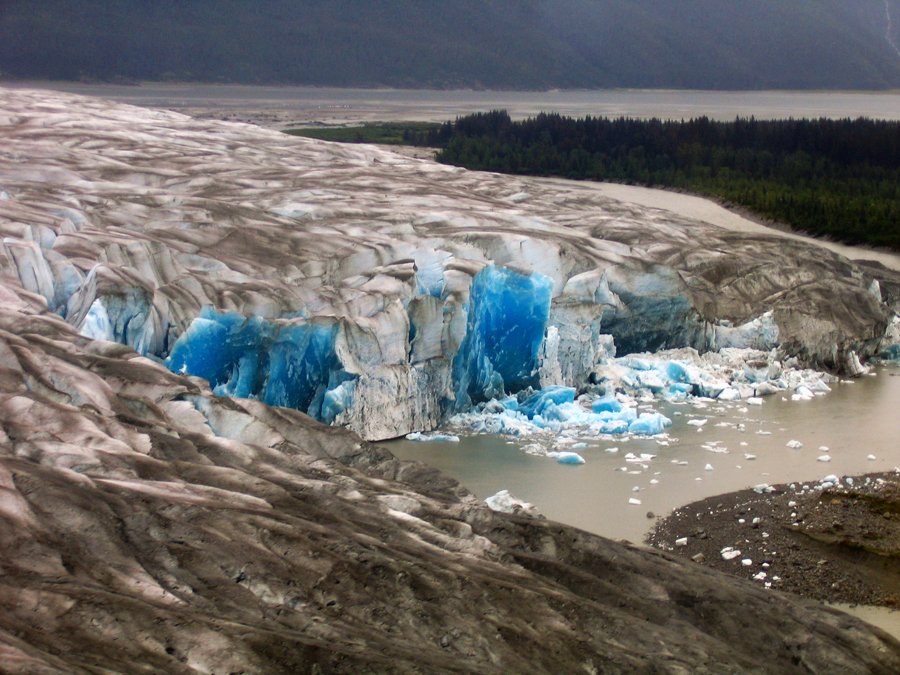 In Skagway, I found the best smoked Alaskan salmon I’ve ever tasted, and the strangest Freemason’s Hall I’ve ever seen. Its rather bizarre front is made of twigs and branches. No one could tell me why it has A and B on the front but it was built in time for the new Millennium – the 20th century! 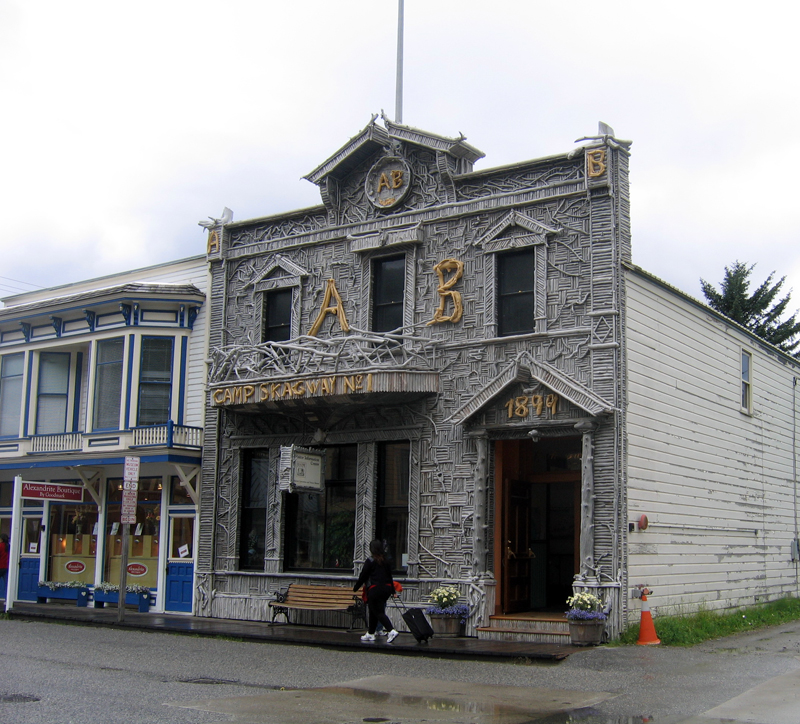 We arrived in Ketchikan early. It’s a small town with a remarkable totem pole standing tall in its centre. 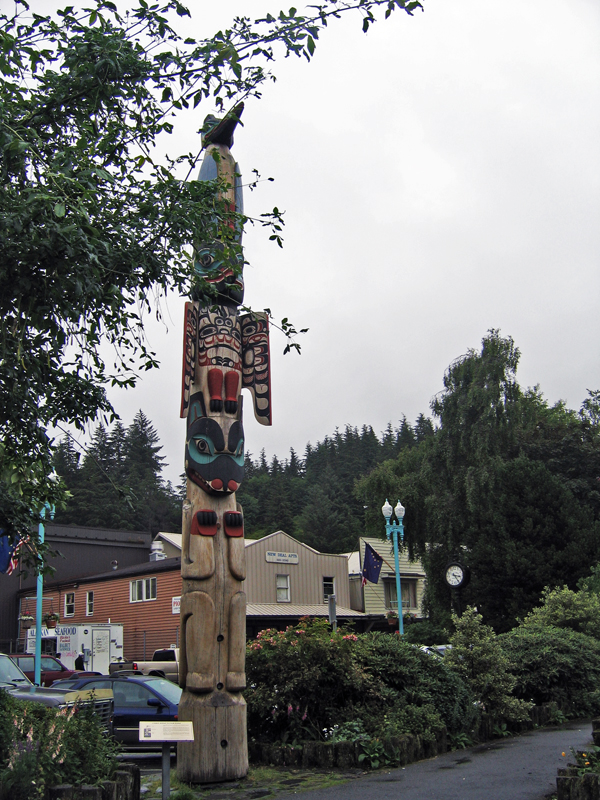 From here, I was able to take a small plane high above the scenic mountains. It was misty but again, the clouds made a spectacular backdrop for mountains and glaciers. I got to play co-pilot. 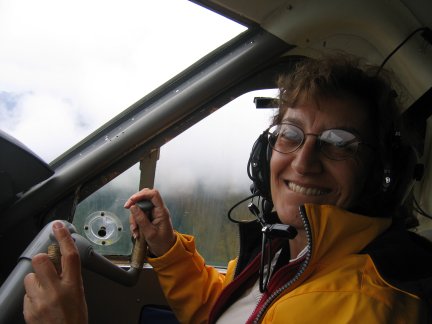 We landed on a small lake and climbed aboard a boat to return by water affording two very different views of some of the same landscape, including this tiny island or is it a volcanic plug? 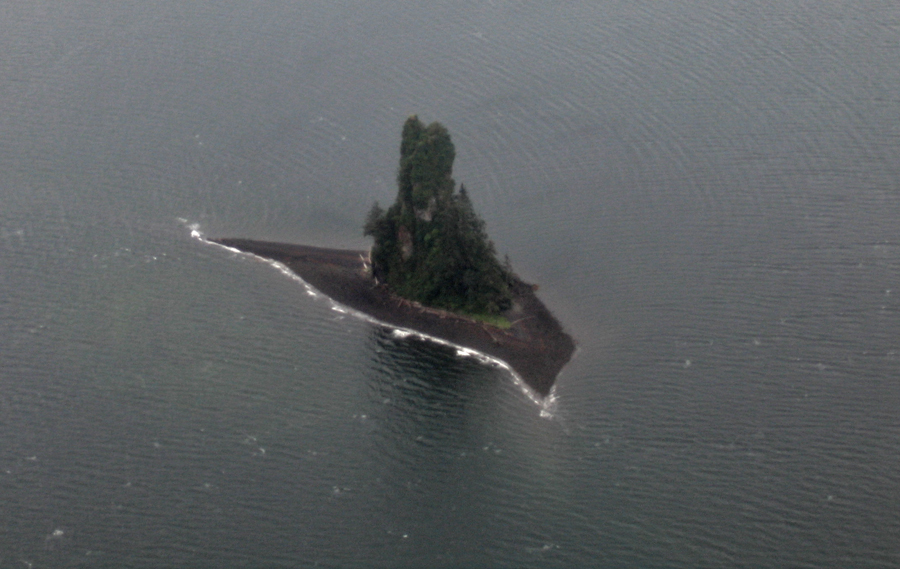 the island from the air 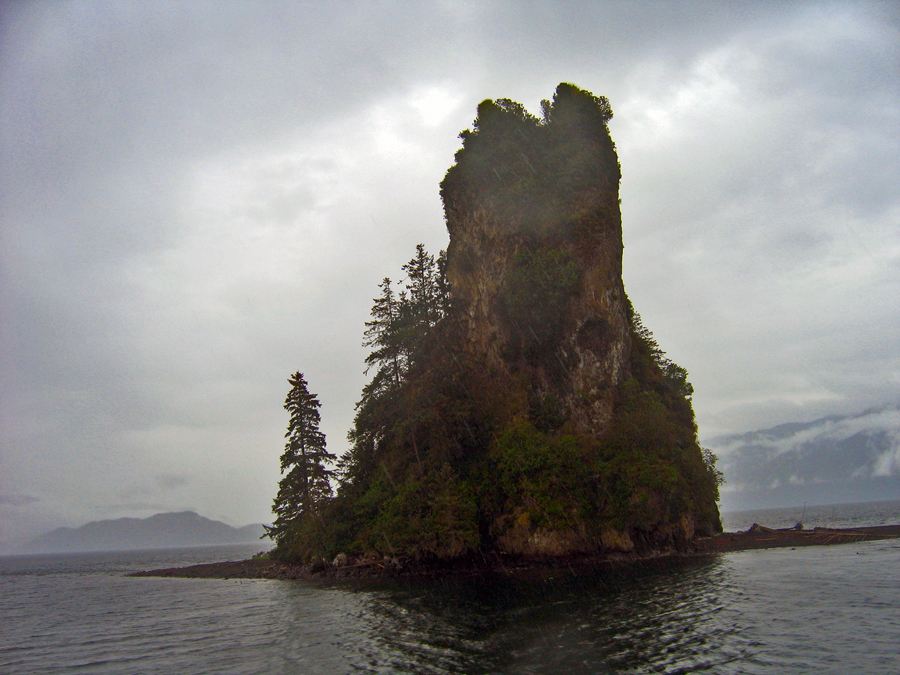 the same island from the water

We passed close to a small rocky outcrop where seals had patently decided to bask in the brief sight of sunlight. They paid no attention at all to our little boat. 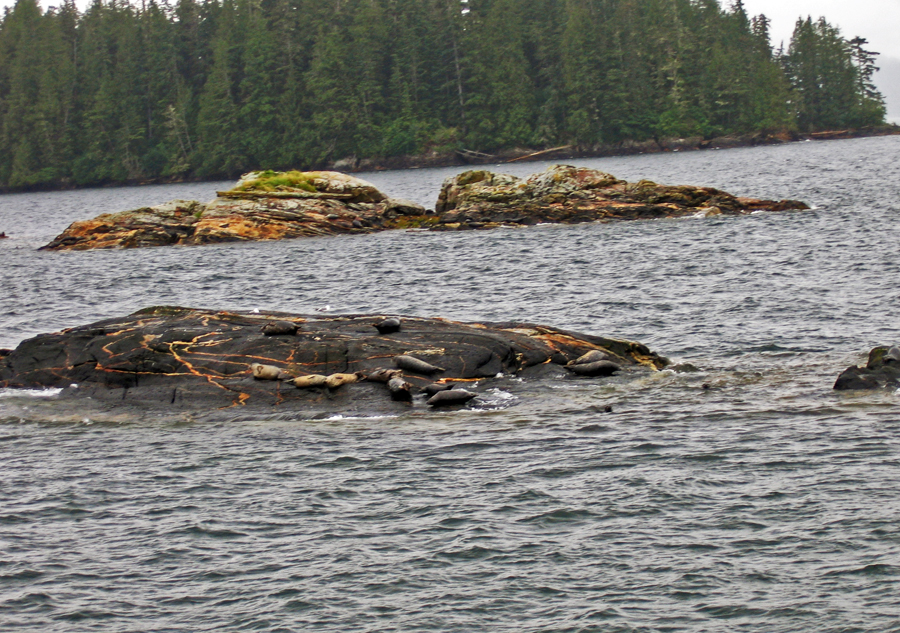 Wherever I turn in this remarkable state, the landscape is powerful and almost theatrical in its beauty. Below a tiny boat seems to be inconsequential with a spectacular glacier as its backdrop. 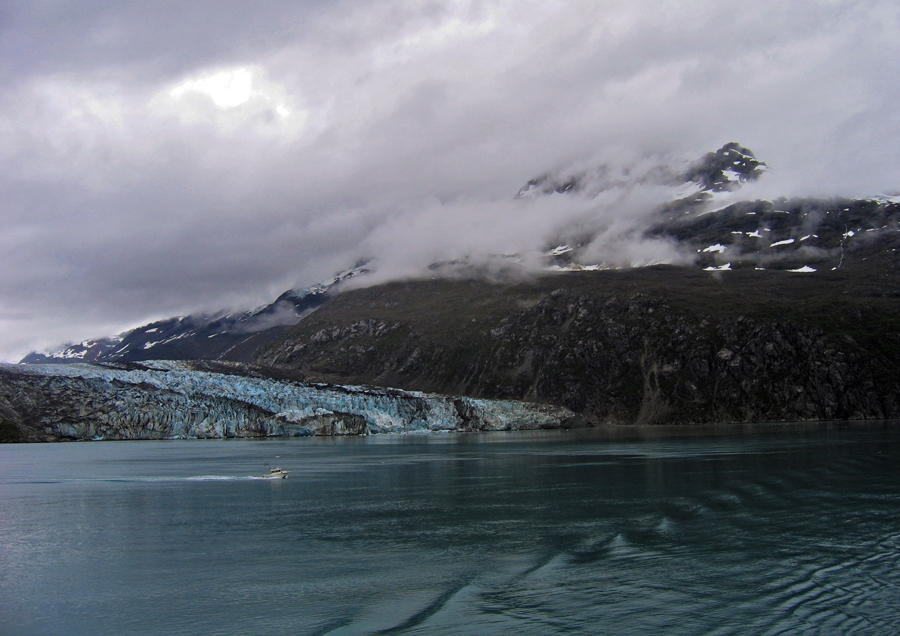 As we returned through the Inside Passage once more, everyone left the dining room to rush to the deck. A pod of orca were swimming alongside the cruise ship, playing in the wake. Here’s another sight you won’t see on shore. 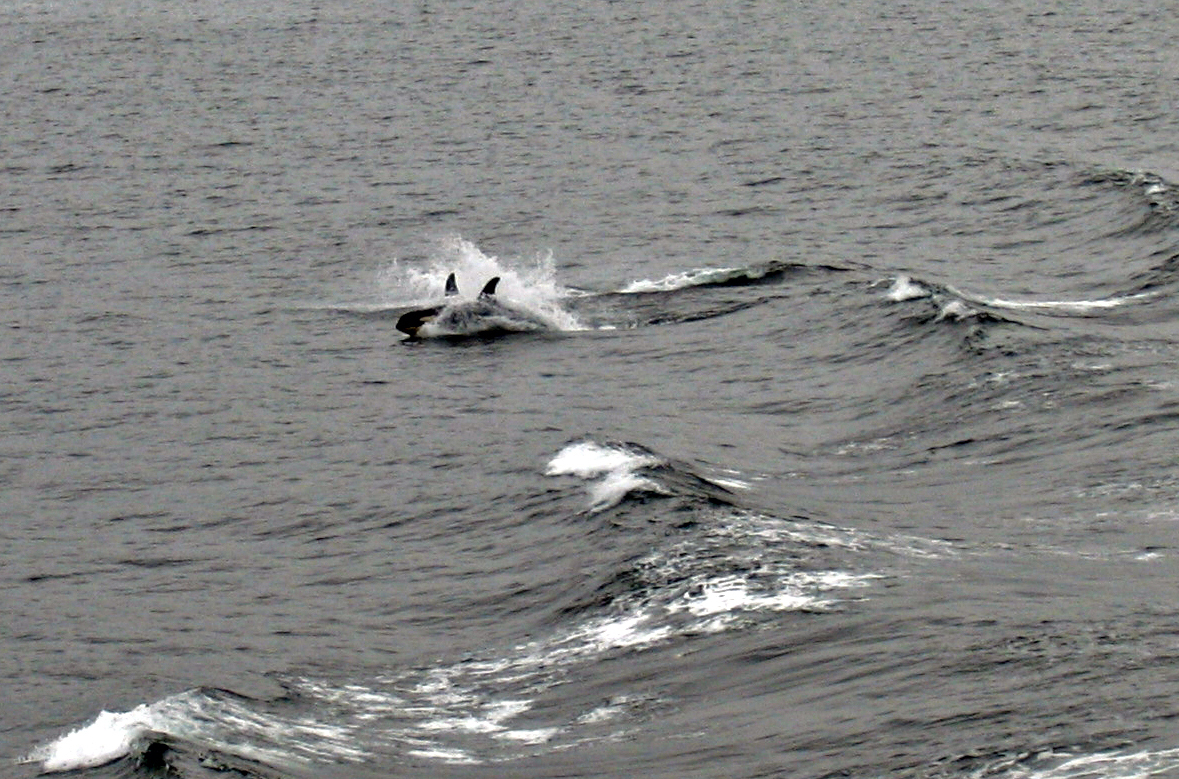 Cruising has me hooked. What a wonderful way to see so many different places at once. Stay tuned for more cruise adventures.