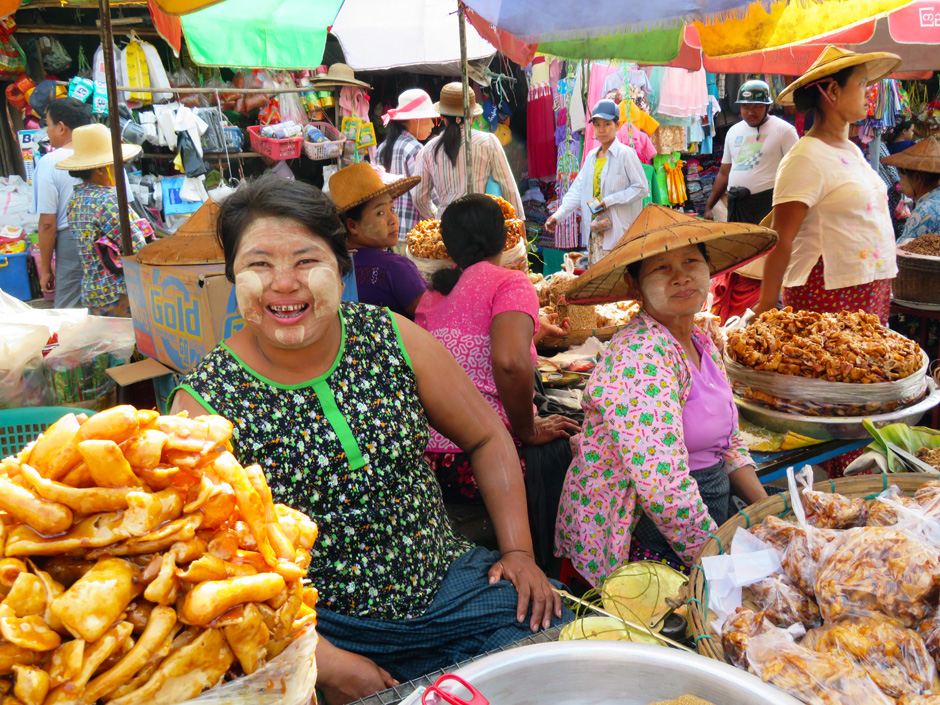 The relentless sun shimmering on gold temples, the inevitable dust and sand at the end of the dry season, the difficulty of coping in a language so foreign to me that even after a week, I can’t easily remember simple phrases – these are the impressions I have taken away from Myanmar. 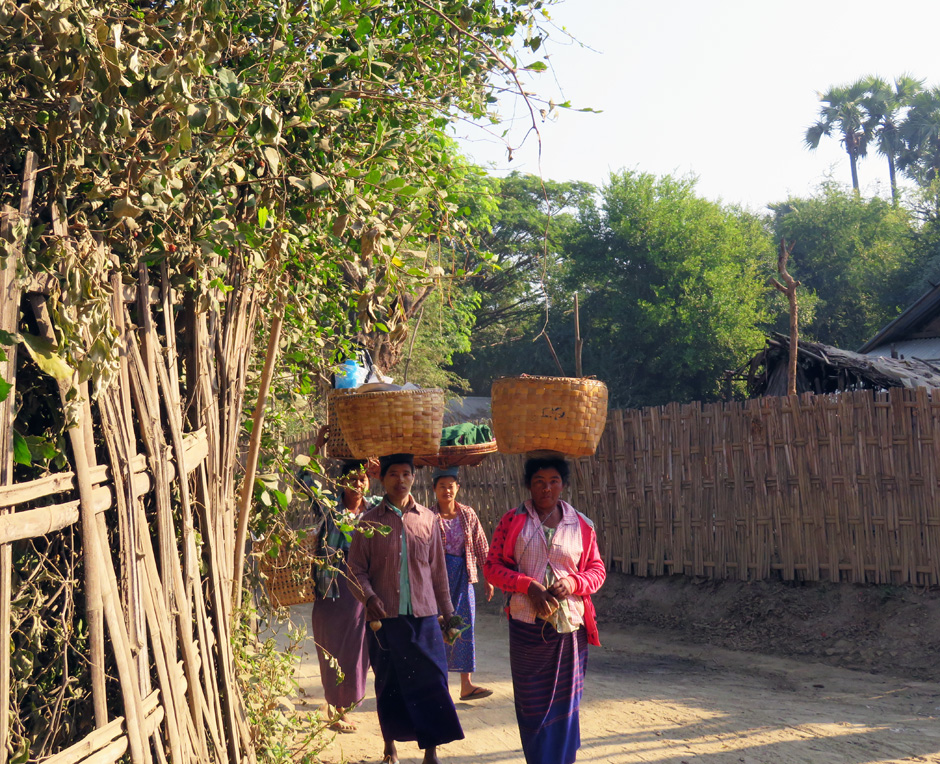 Most of all, I will remember the people of Myanmar. This is a poor country. The poorest wash themselves and their clothes in the river. They live simple lives. 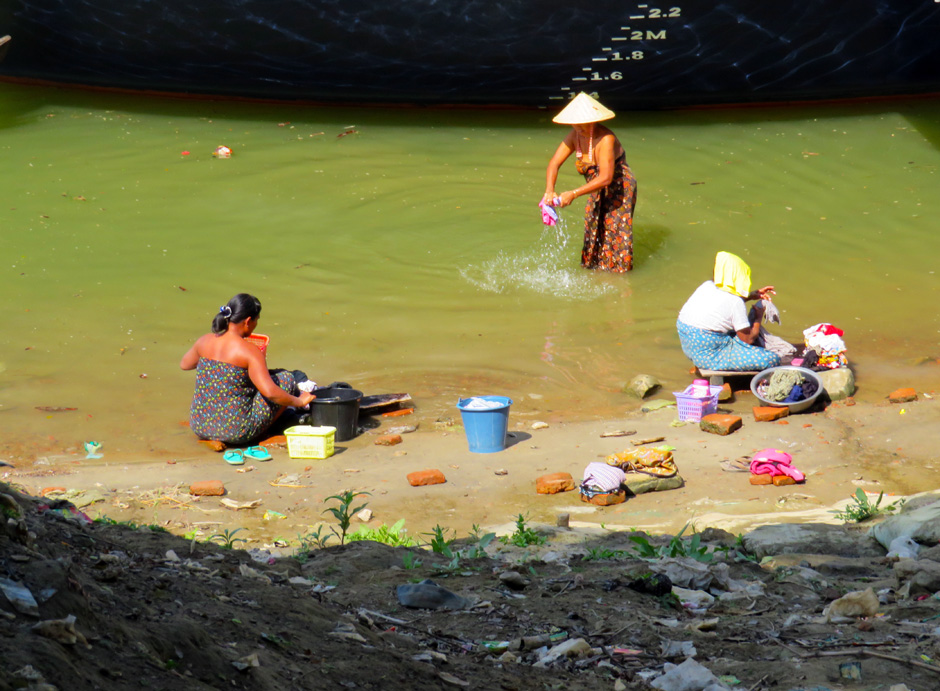 Nonetheless, a ready smile in return for mine was always forthcoming. A delighted response always came to my hesitant “Mingalabah!” (the greeting for hello, good morning, good evening…everything!). 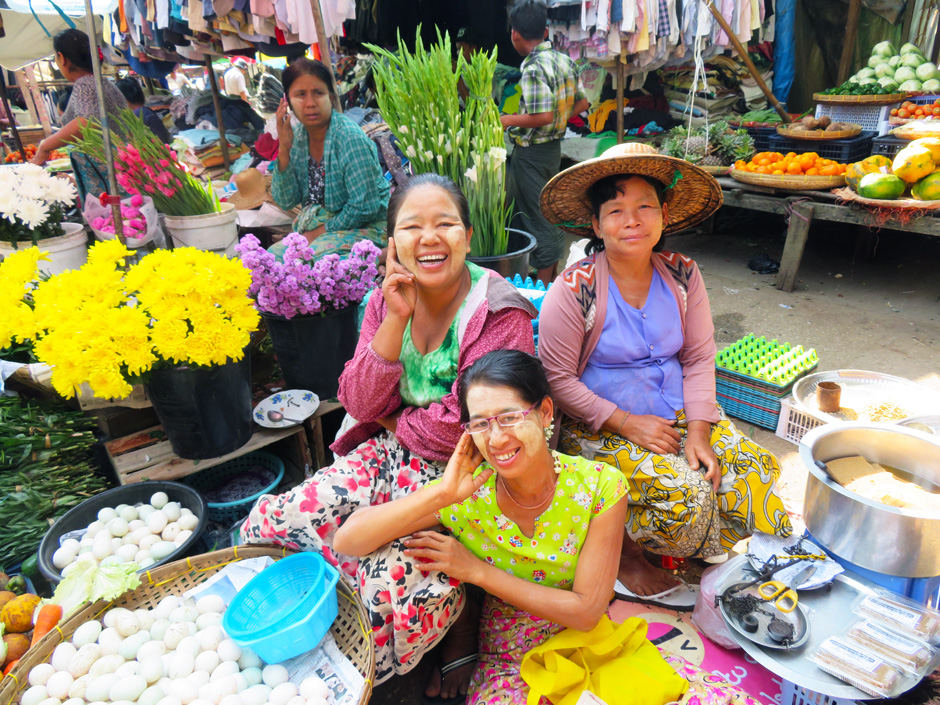 They daub their faces with thanaka, a paste made from the bark of a tree. It’s supposed to soften the skin, protect them from the sun, and make them look beautiful. Everyone has a different pattern on their faces. It’s on children too. 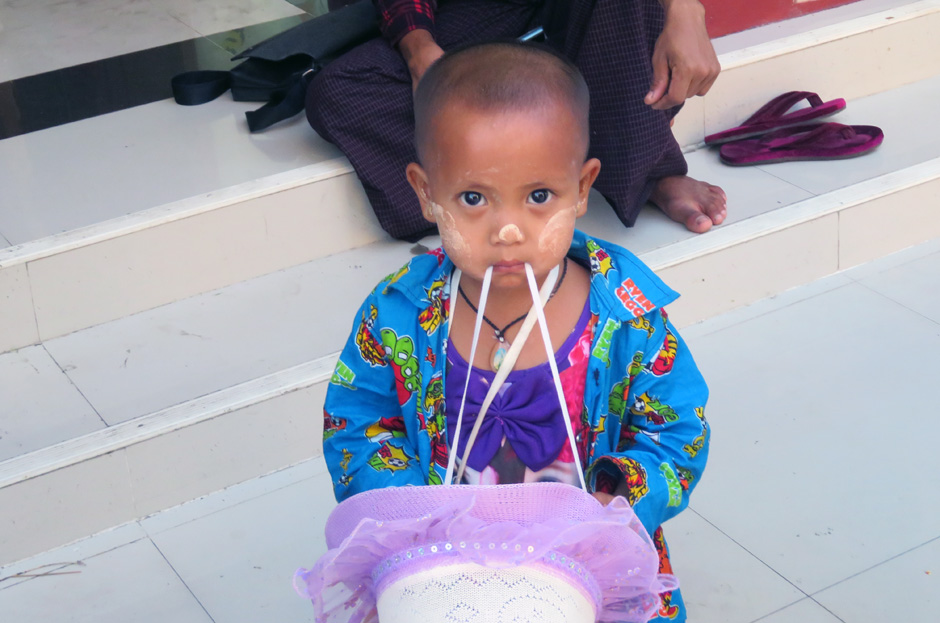 There are beggars who rely on the generosity of good Buddhists to feed them. And they aren’t disappointed. Generosity seems to be part of their culture. 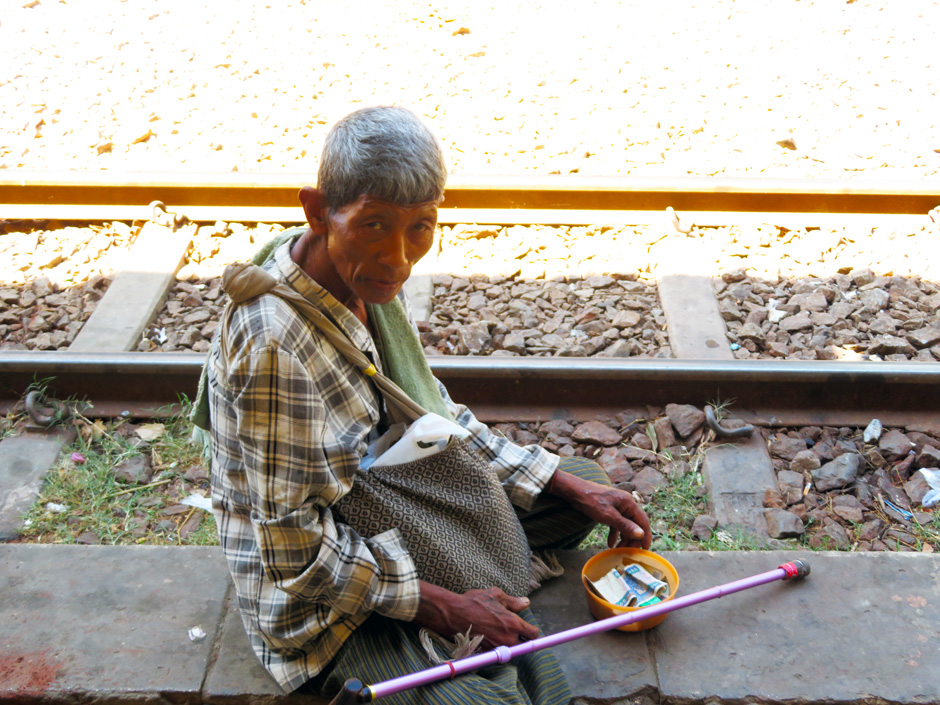 In one Buddhist school we visited, a little boy presented with two gifts – a pen and a notebook – turned to a nearby child who hadn’t received anything, and gave him the pen. 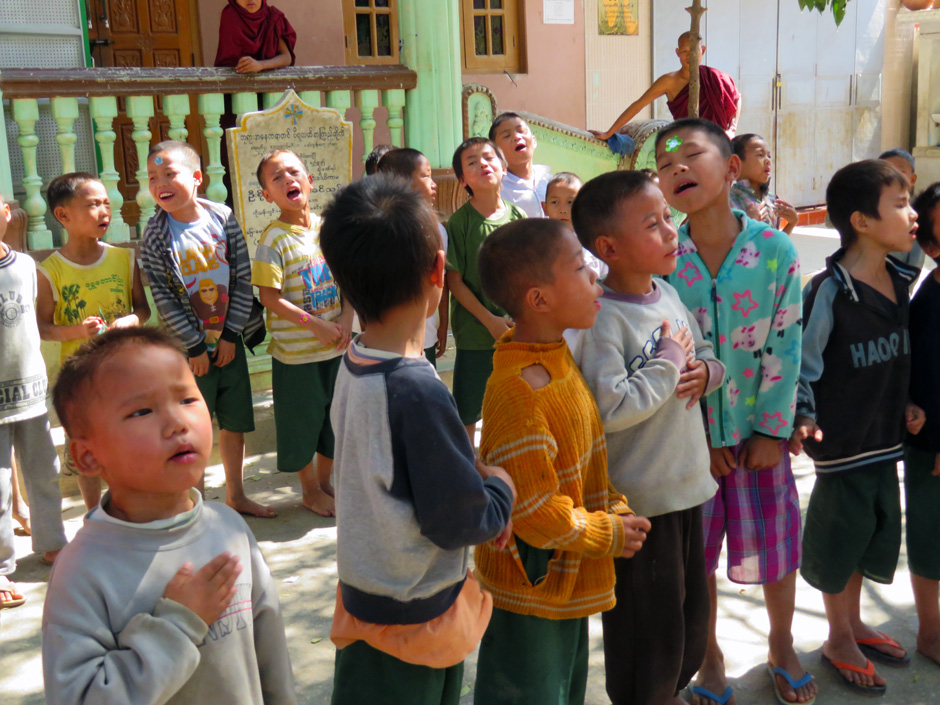 They sang us songs of welcome, and in return, we offered our action-filled version of “When you’re happy and you know it, clap your hands.” They joined in the gestures, and when we were done, offered with much laughter, their own version of the song with very different actions.

Buddhism is the religion of 85% of the population and apparently 70% of males spend some time living as monks – eating nothing after lunch and spending time in contemplation. Monks are ubiquitous…less common are the pink robed nuns with shaved heads. 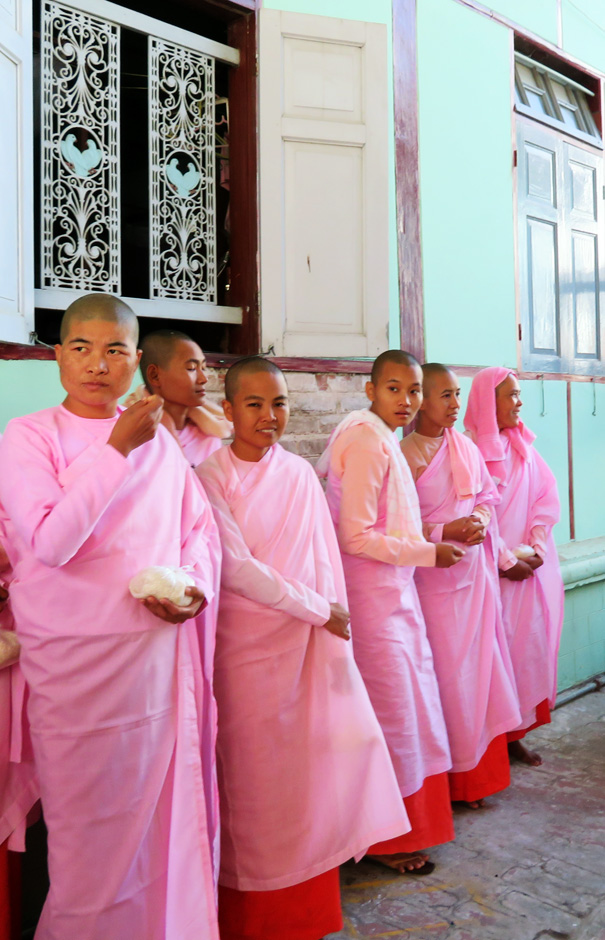 Even children might spend some time in a monastery – walking around in their robes collecting their day’s food. 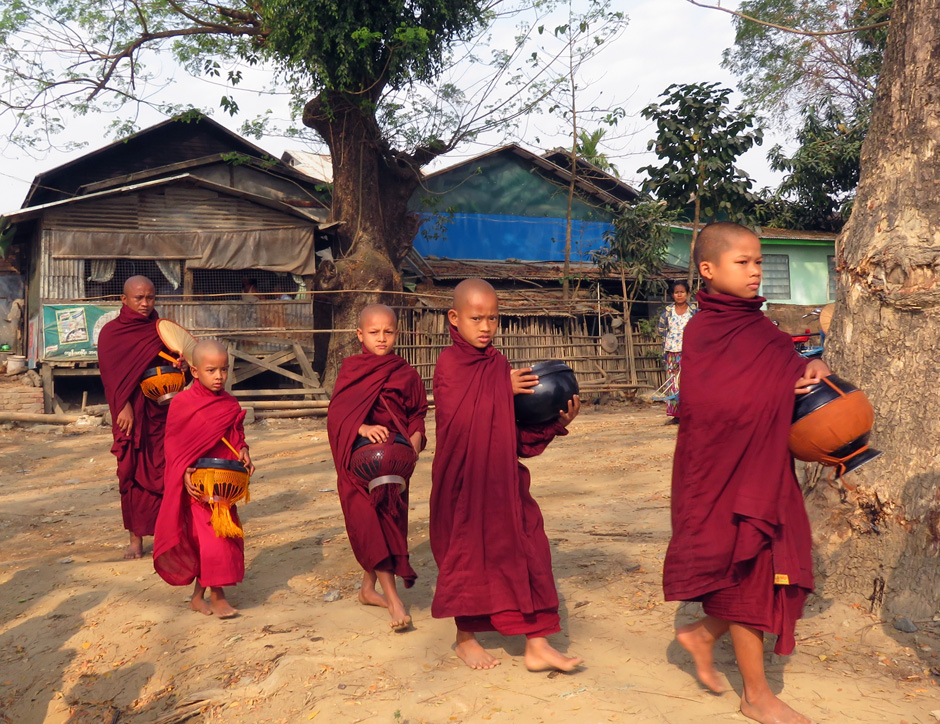 Children have few toys but they keep busy. This little crew are fishing using sticks and a bag. They drive the fish into the bag. 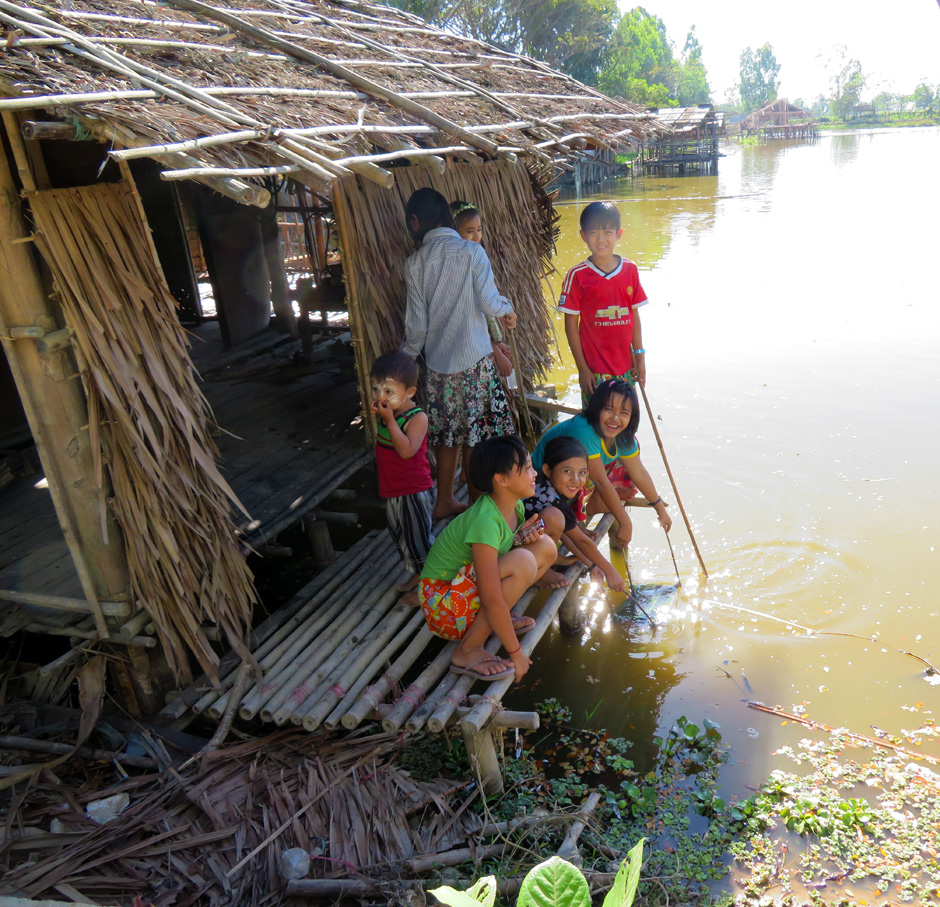 It’s hard not to fall in love with these children of Myanmar. They are beautiful. I found myself playing with them everywhere we went. 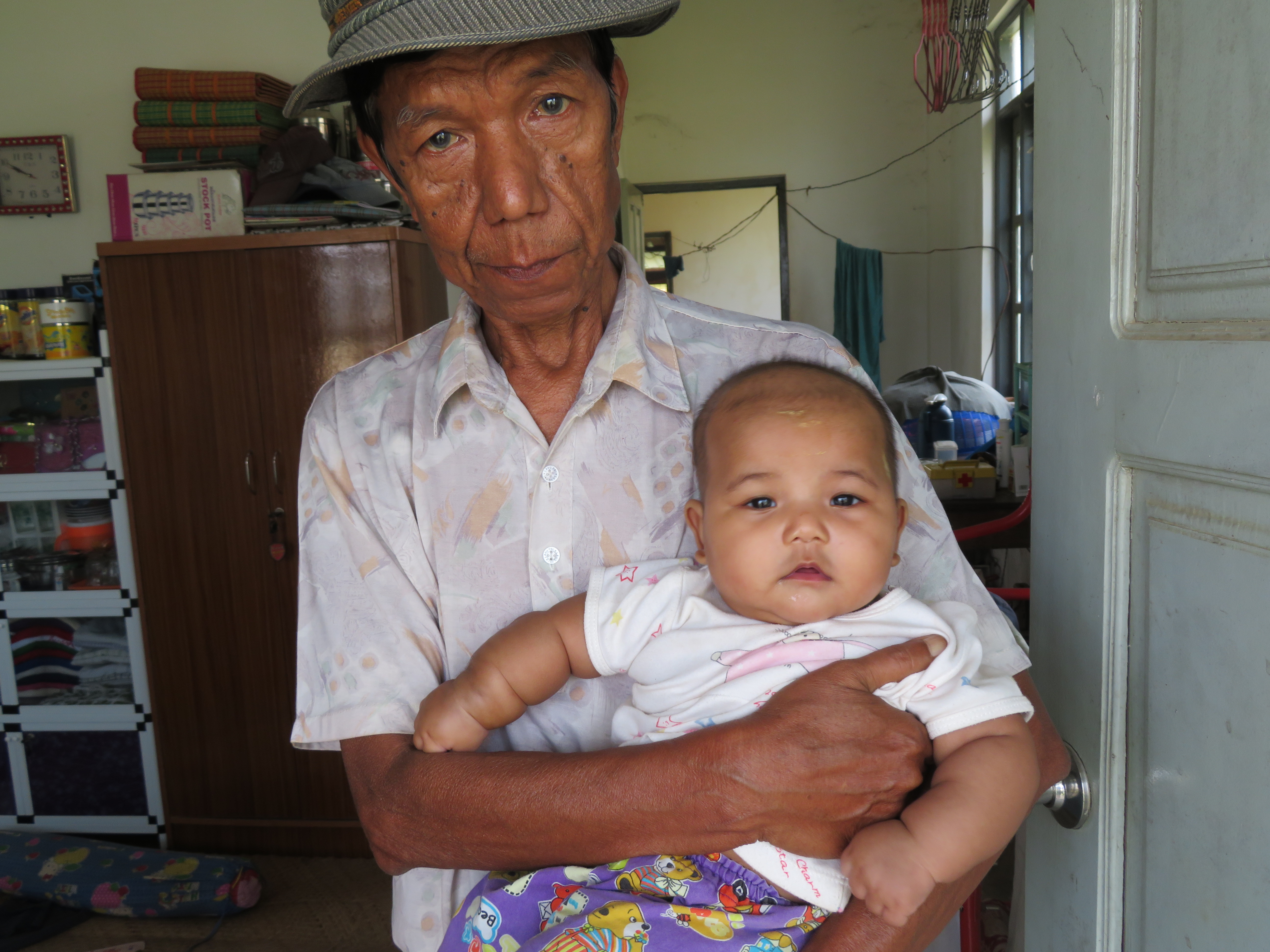 Little ones would clap and smile. 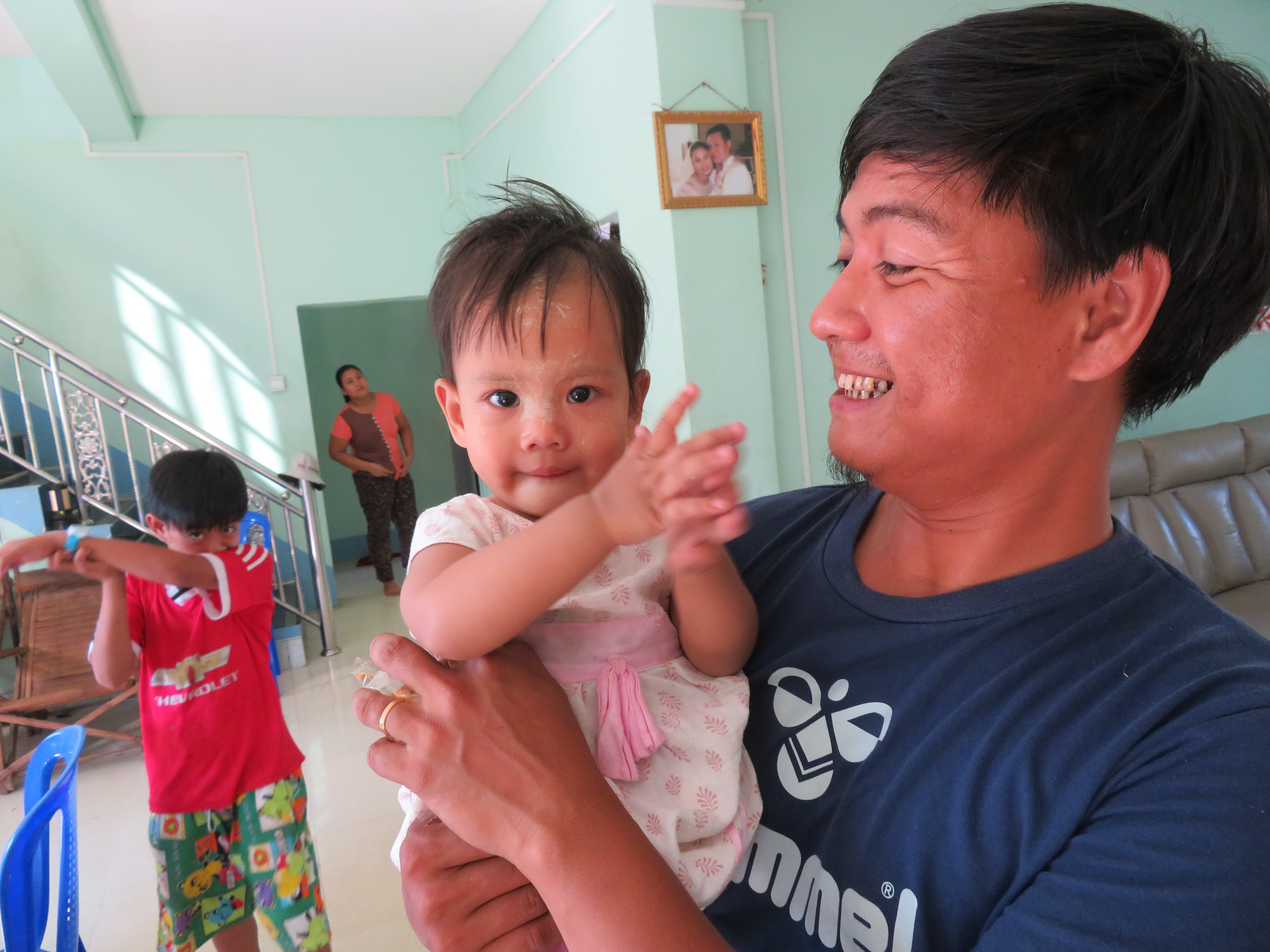 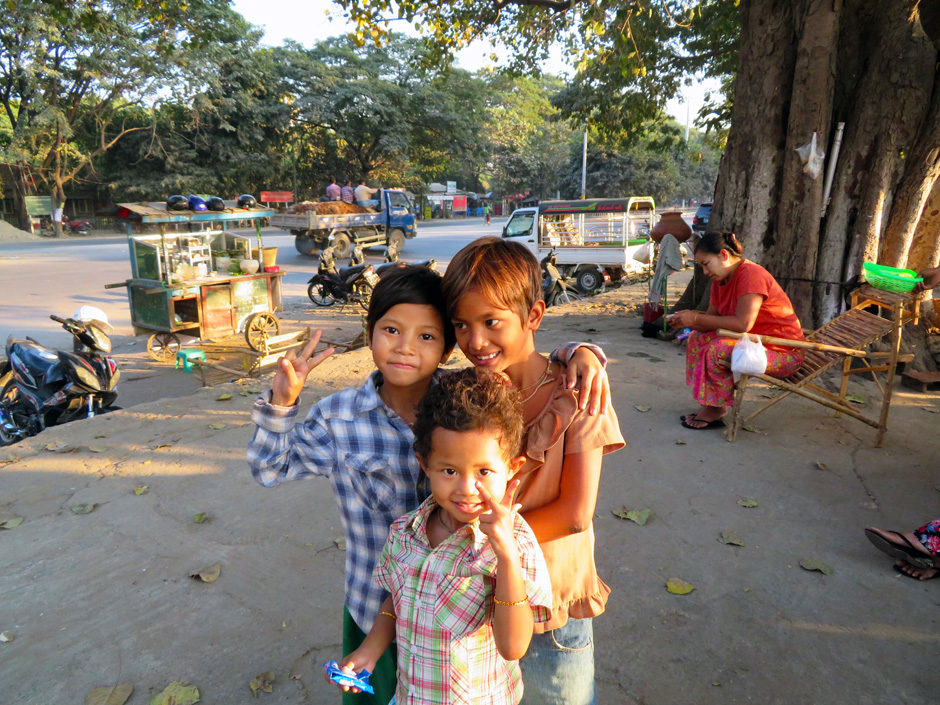 At the school, Ed was swamped with children who wanted to each have turn with this gesture. 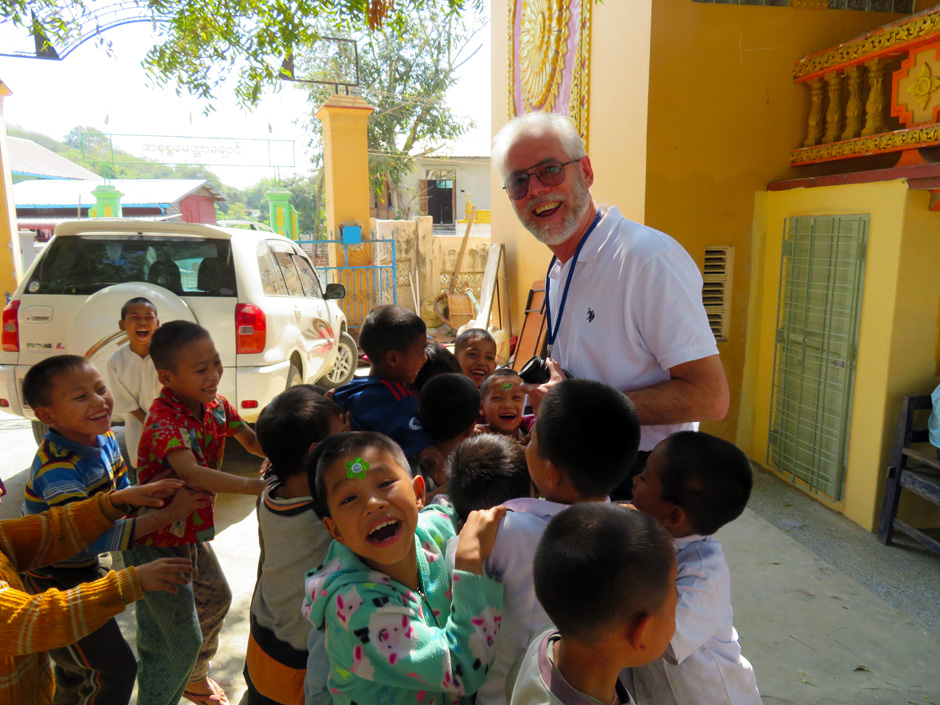 A wave brings plenty of waves in return. 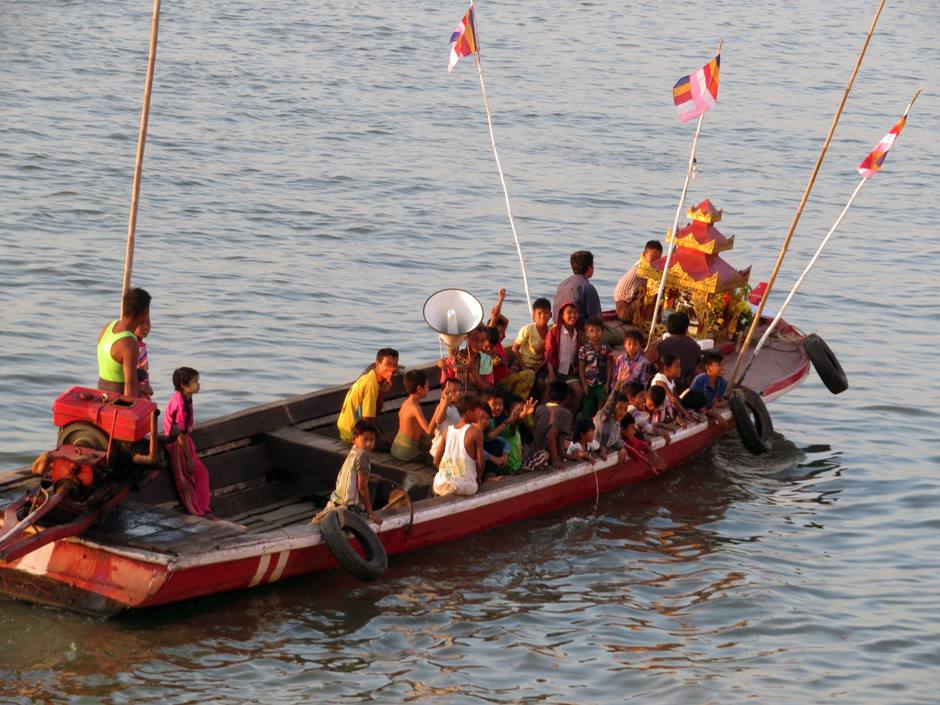 But if you hope to visit Myanmar, do it soon. The country has been closed for decades by a military junta. Now emerging, they are modernizing very fast. While some of this is good, it is changing both the landscape (the cities have become polluted and traffic is chaotic) and the people (now there are even small boys in monks robes begging for money – something that a true monk would never do). 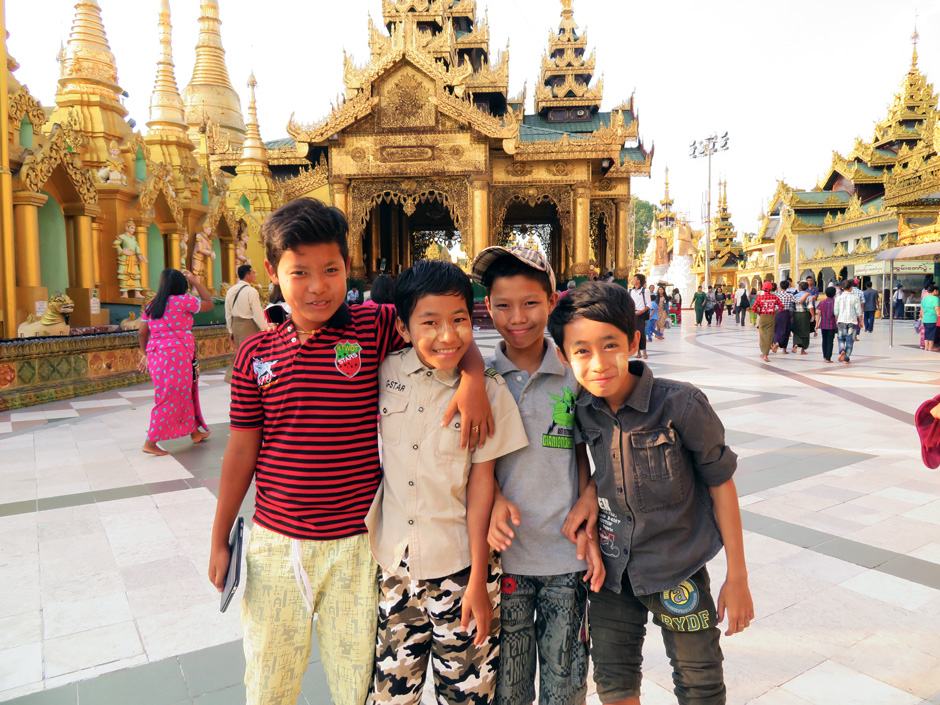 In Myanmar you will be delighted by the thousands of pagodas – their golden stupas rising above the poor homes around them. Even the smallest village has one. And despite recent atrocities by the military in Myanmar, we were impressed by the generosity and kindness of the people we met when we were there. It’s hard to reconcile these two things.

Would you like to try some Burmese dishes? Check this recipe for Khao Soi Curry Noodles served to us aboard the AmaWaterways ship. You can read about our cruise here.