We were looking for the Artichoke Center of the World. So we drove into Watsonville  – where nobody knew what we were talking about.

Ed recalled visiting Watsonville, California many years ago and learning that it held this title. But alas! No longer. Castroville is the current Artichoke Center. In fact, Half Moon Bay should probably hold the title, since it was the first place in America to grow artichokes. These were brought to the New World by Spanish settlers. 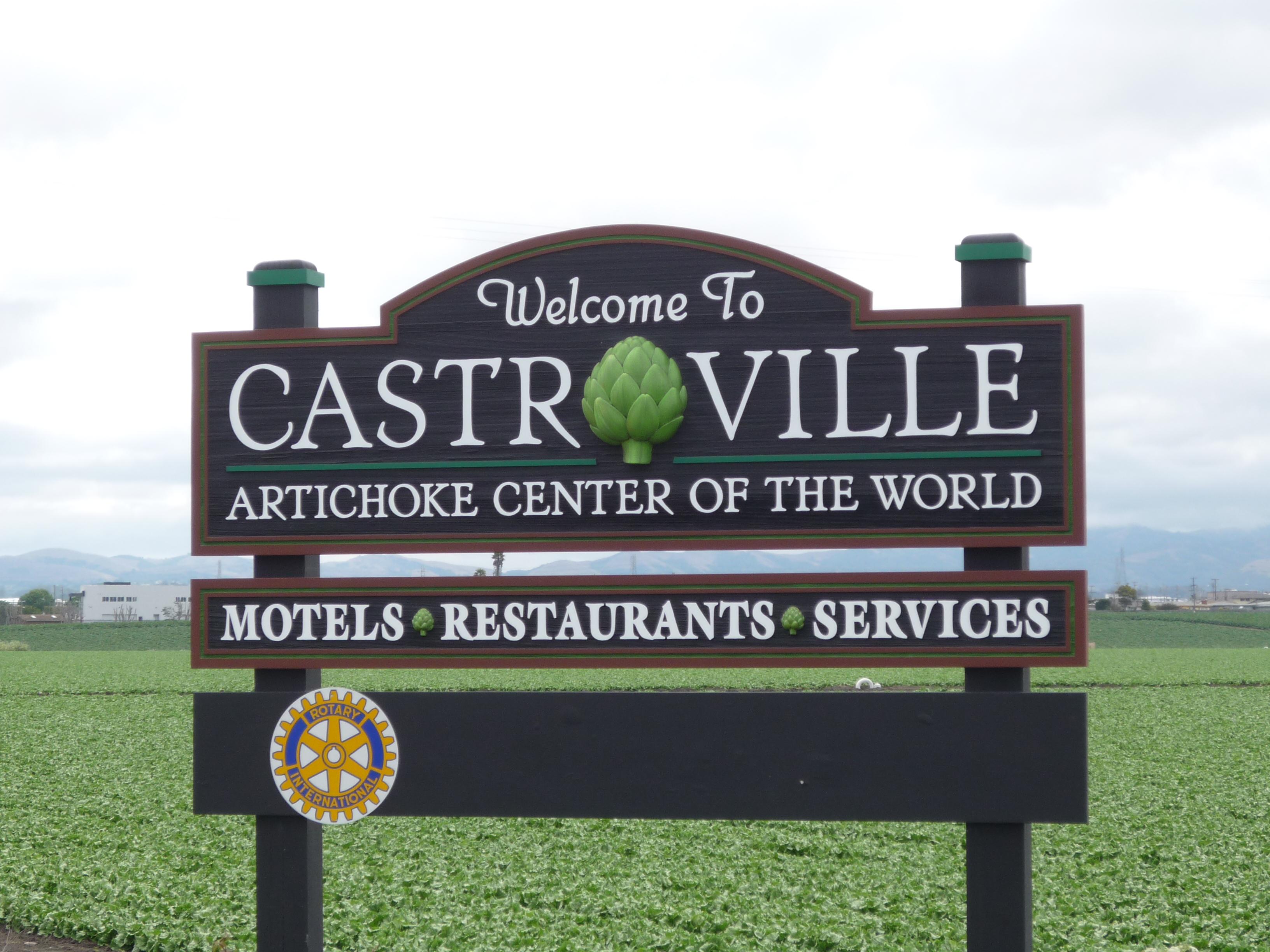 But in 1922, Andrew Molera planted the first shoots in Castroville.  By the following year, there were nine artichoke growers in the area. Within four years there were more than 50 growers and 12,000 acres of artichokes growing around Castroville. These days, most restaurants serving artichokes proudly proclaim their provenance from Castroville.

Having settled the matter of supremacy, we set out to find just how Californians, in the heart of artichoke country, eat their artichokes. Our first taste was at Cibo, a chic Italian restaurant in Monterey which has the most beautiful presentation I’ve ever seen. 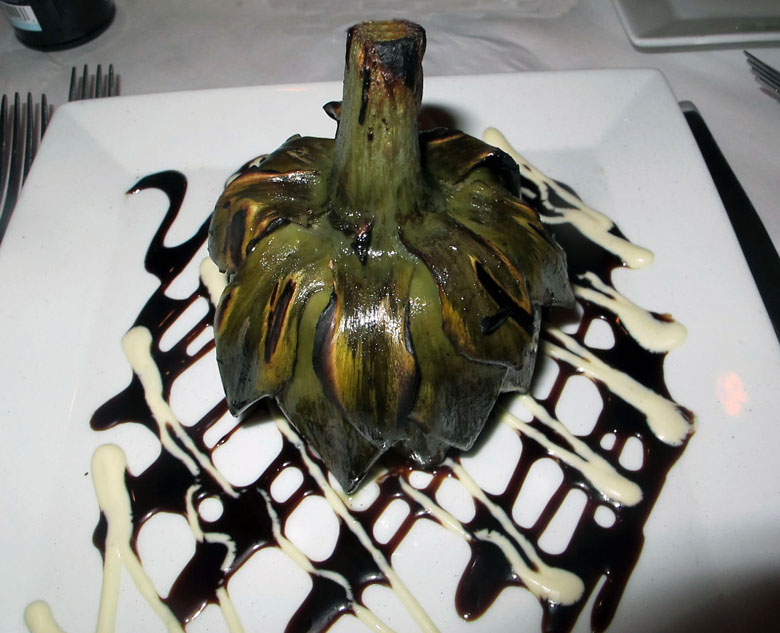 A giant artichoke was first steamed, then grilled on an open flame, lightly charring the outside leaves but imparting a lovely smoky flavour throughout. This was then served on a checkerboard of balsamic reduction and garlic aioli. It was so beautiful, I didn’t want to destroy it. But destroy it I did. It was glorious, the balsamic tang and smooth aioli making a lovely pairing with the leaves, which, let’s face it, are relatively bland.

The next day we visited the Monterey Bay Aquarium, an amazing place; there simply isn’t another word for it. We watched children learning to appreciate the oceans and all the creatures in this last relatively unexplored frontier of our planet. 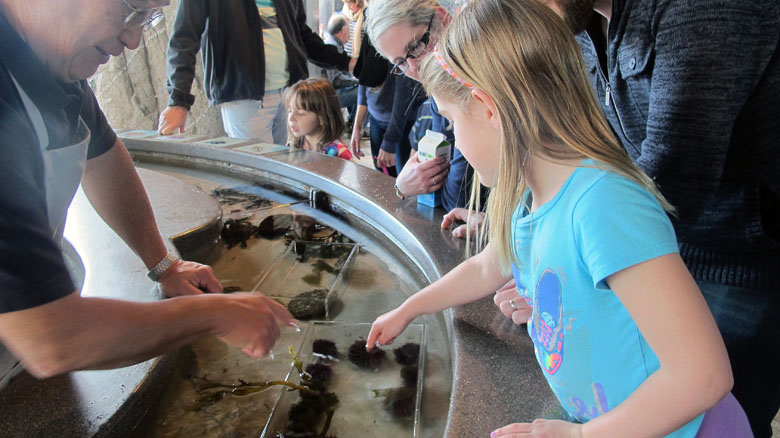 The Monterey Bay Aquarium is responsible for Seafood Watch, a fabulous program to encourage the consumption of sustainably harvested seafood and prevent wanton destruction of dwindling species. They offer a free app for mobile phones to check before you buy. 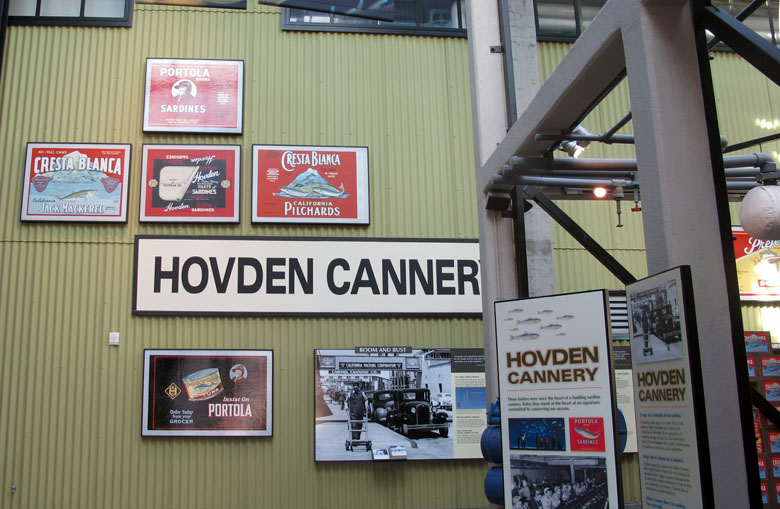 What’s most fascinating is that the aquarium now sits in the building once occupied by an enormous sardine cannery. Indeed, in the first 40 years of the 20th century, the sardines were fished out of existence in Monterey Bay, and most were canned in this building.

There was so much to see here that we had worked up an appetite walking around it. A short walk away, we found ourselves at Cannery Row Brewing Co. Artichokes are on the menu, hurrah! 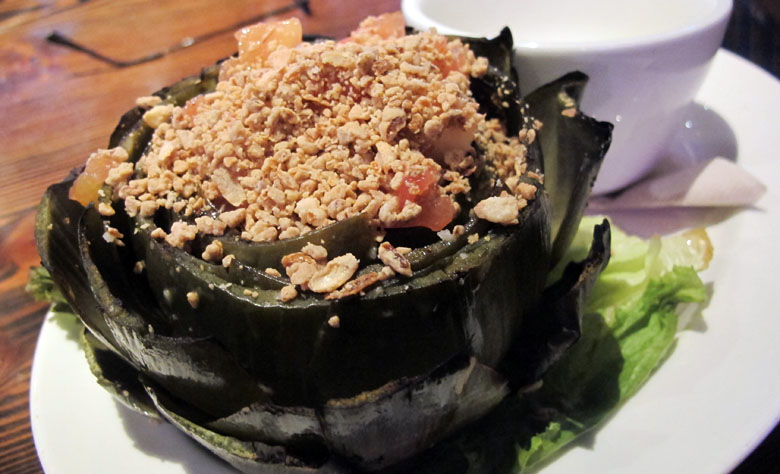 This time the giant artichoke had been wood grilled, then filled with fresh salsa and drizzled with poblano pepper cream and sprinkled with crispy garlic (deep fried). The leaves had the same smokiness but the salsa and cream gave it a whole new flavour profile. And the crunch of fried garlic just added another texture for perfection.

You might think I’d had enough but you’d be wrong. When I found artichokes on the menu again today, I decided one more sample was in order. We spent a contented morning exploring Carmel-by-the-Sea, a pretty town of chic boutiques and wonderful beach. It’s the most dog friendly place on earth – thanks in part to Doris Day. 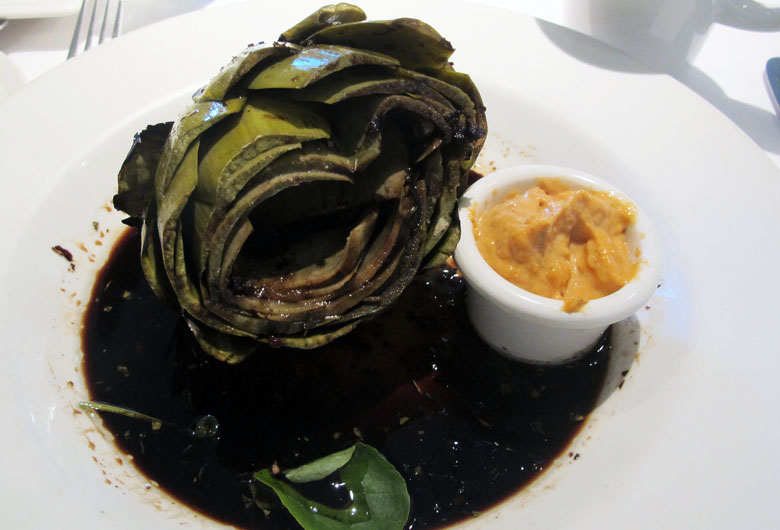 At a local favourite hangout, the Rio Grill in Carmel, I tried one more version of artichokes. This time it was marinated, then fire roasted and served with a sundried tomato aioli. Frankly, this version was so tasty with the balsamic marinade and flame-kissed leaves, it didn’t need the aioli at all.

I love artichokes – can you tell? They are low in calories and fat. Nonetheless, they are a rich source of dietary fiber and anti-oxidants, as well as an excellent source of folic acid and Vitamin K. And while I have always enjoyed them with a light lemon juice dressing, I think might branch out a little. Though, I confess, I’d have a hard time duplicating Cibo’s artistic presentation. 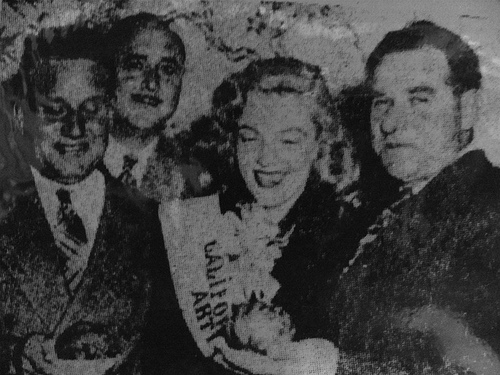 By the way, I’m in good company in my love of artichokes. Marilyn Monroe was given the honorary title of Artichoke Queen in 1947 during a visit in the Monterey Bay Area. A photograph was taken of her wearing a sash that bore the words “California Artichoke Queen,” and she posed with three local dignitaries, all holding artichokes. I love that picture!