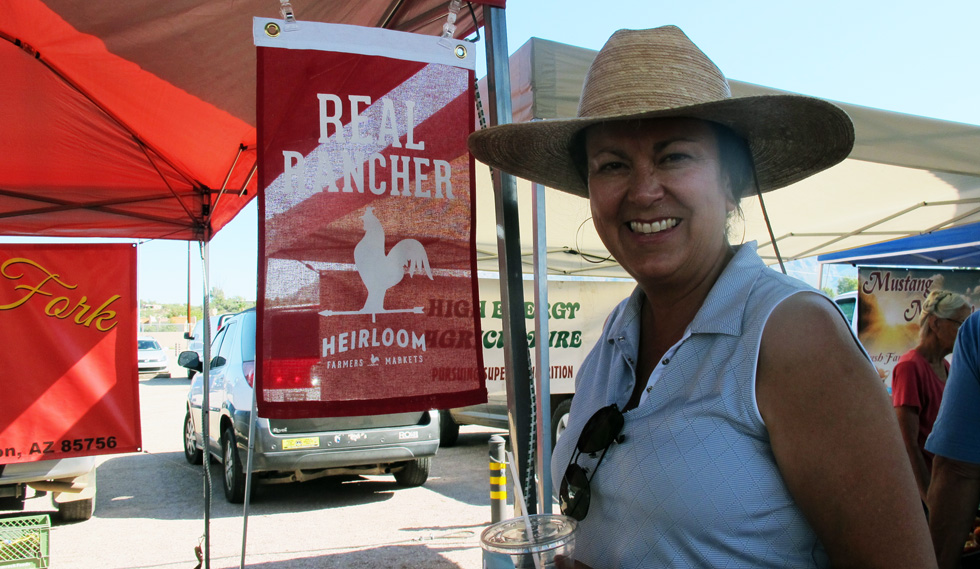 I’ve always maintained that a farmer’s market offers an insight into the local community and this one is particularly significant. Tucson sits in a desert but for these farmers and for the centuries of native farmers before them, this dry land with only 12 inches of rain each year, provides sustenance. 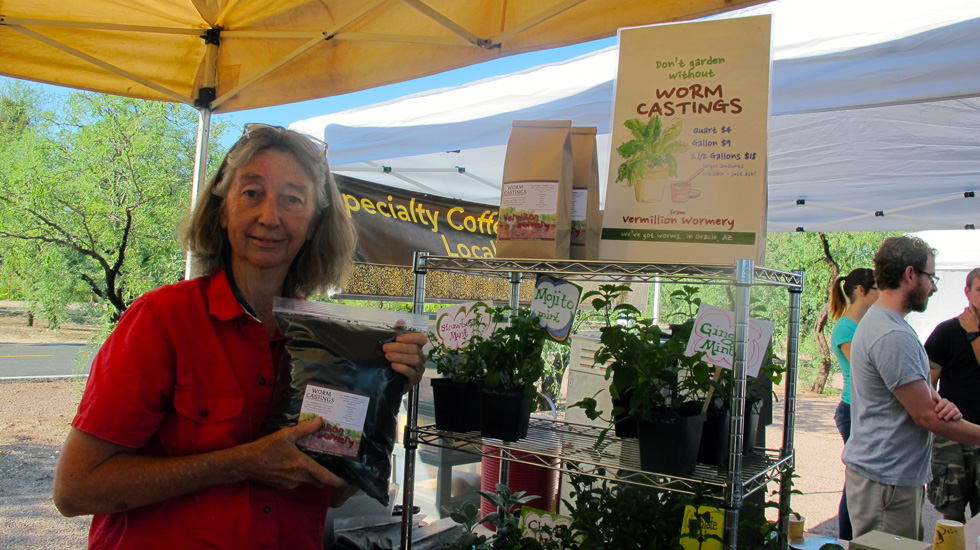 Worm castings contain water-soluble nutrients. They are an excellent, nutrient-rich organic fertilizer and soil conditioner. “The soil here is terrible so first you have to grow your soil {with worm castings}. And you have choose plants that grow when it’s very hot,” explains Leigh, pointing to trays of budding amaranth, saltwort (also called okahijiki), and malabar spinach. “These make excellent substitutes for the usual salad greens.” Indeed, okajihiki is richer in nutrients than spinach and adds a nice crunch to salads. 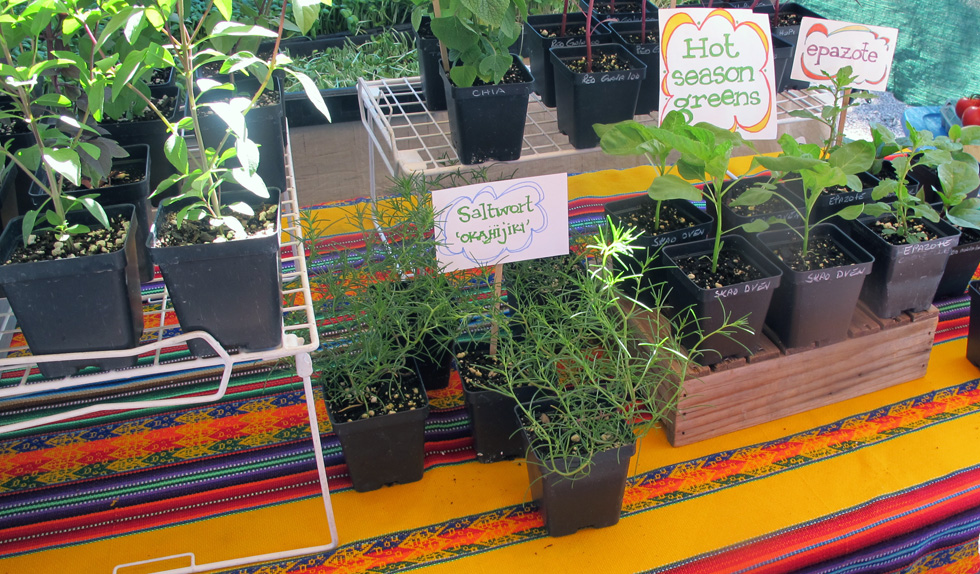 She lets me taste one of the fleshy leaves of malabar spinach – it’s slightly slimy in texture but tastes deliciously peppery and it turns out, is very high in vitamins and anti-oxidants.

This market is a cornucopia of what can be wrung from the desert. Foraged food like cholla buds from the barrel cactus, prickly pear, and nopalitos (young cactus leaves) can be found in everything from jams and jellies to cosmetics and beverages. It’s amazing how much food is grown in the desert. 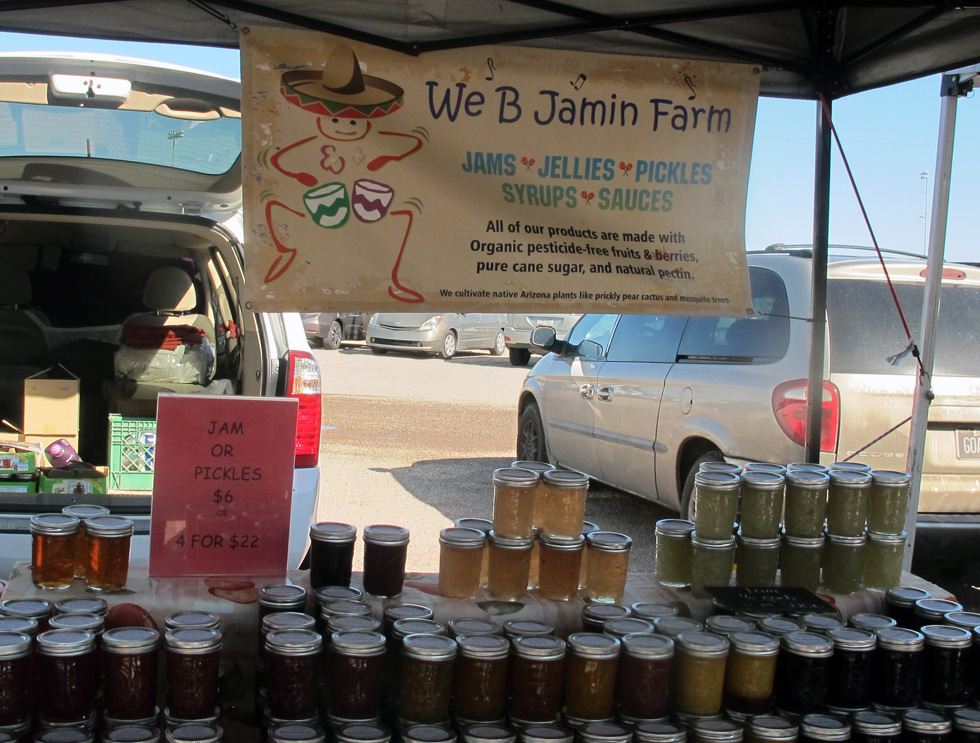 At one end, the rich scent of roasting chili peppers catches my nostrils. It makes me salivate. Red’s Roasters roasts these as well as eggplant, bell peppers, zucchini and more. I chat with Maria, a customer who makes her own fresh salsa but uses the roasted peppers to give it a rich, smoky flavour. “The roasted eggplant is great in pasta sauce,” she adds. I’m getting ideas! 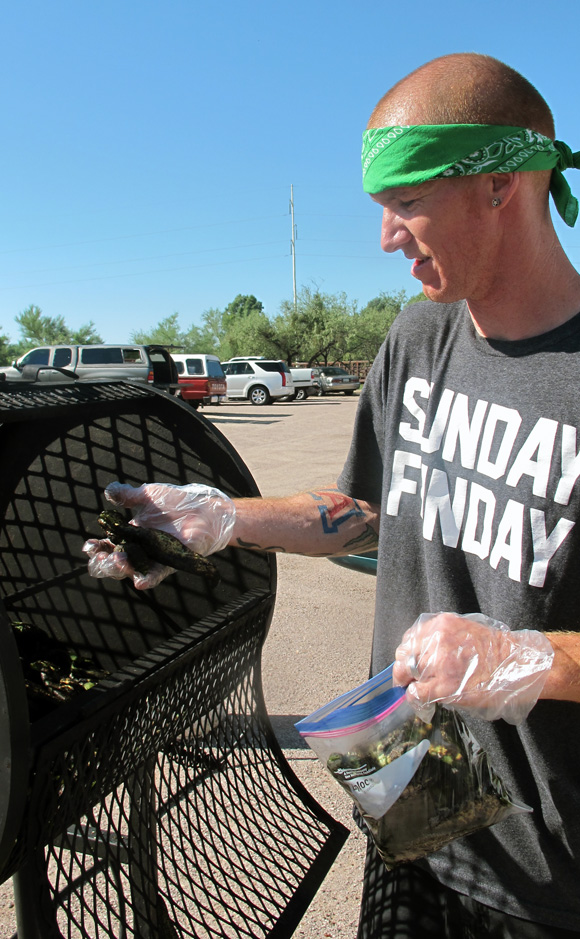 The Fermented Tea Co. offers me a sample of kombucha. According to their blackboard, it boosts energy, is a detox agent, helps to regulate blood sugar, relieves pain, and more. Kombucha is produced by fermenting tea using a “symbiotic ‘colony’ of bacteria and yeast” (SCOBY). It’s also delicious.

Some market stalls here have a designation of Real Farmer or Real Rancher, to indicate that the food they sell is their own. 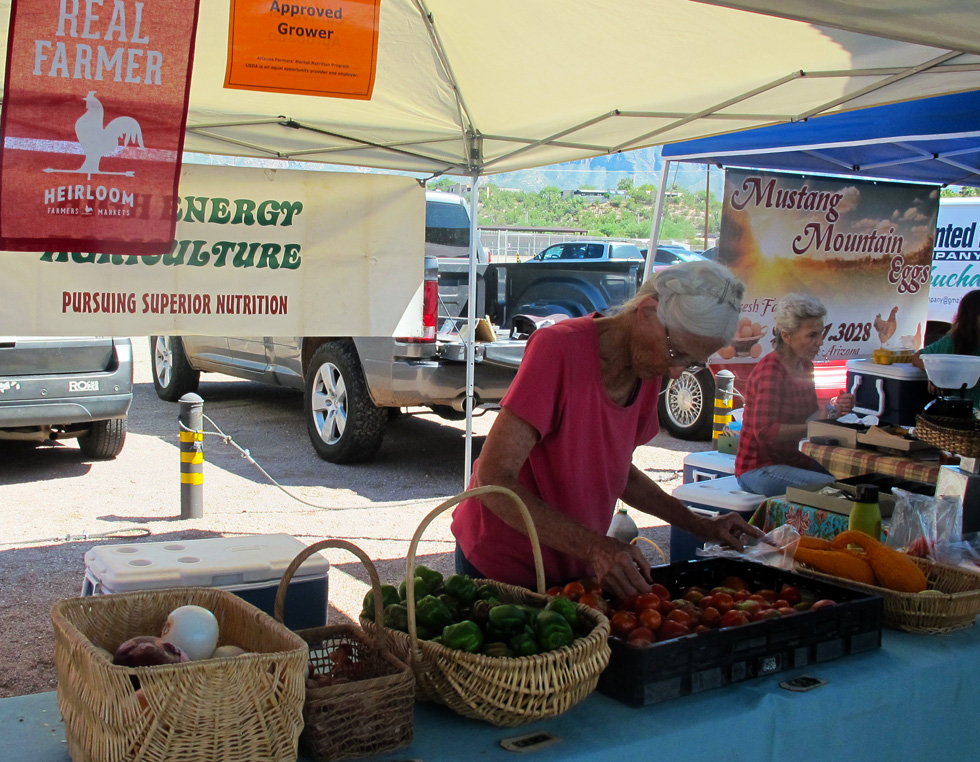 The names of some are already familiar from the menus of area restaurants.  A stellar list of chefs have formed close relationships with these local producers and feature them on their menus. The list includes superstars like Ryan Clark of PY Steakhouse; Ken Harvey at Flying V (Ventana Canyon Resort); and James Beard award winning chefs like Janos Wilder (of Downtown Kitchen), Melissa Kelly at Primo (Marriott Starr Pass Resort) and Chris Bianco (of Pizzeria Bianco).

Markets are not always accessible to low income people. In the US, welfare recipients are given food stamps rather than money but farmers markets operate on cash. 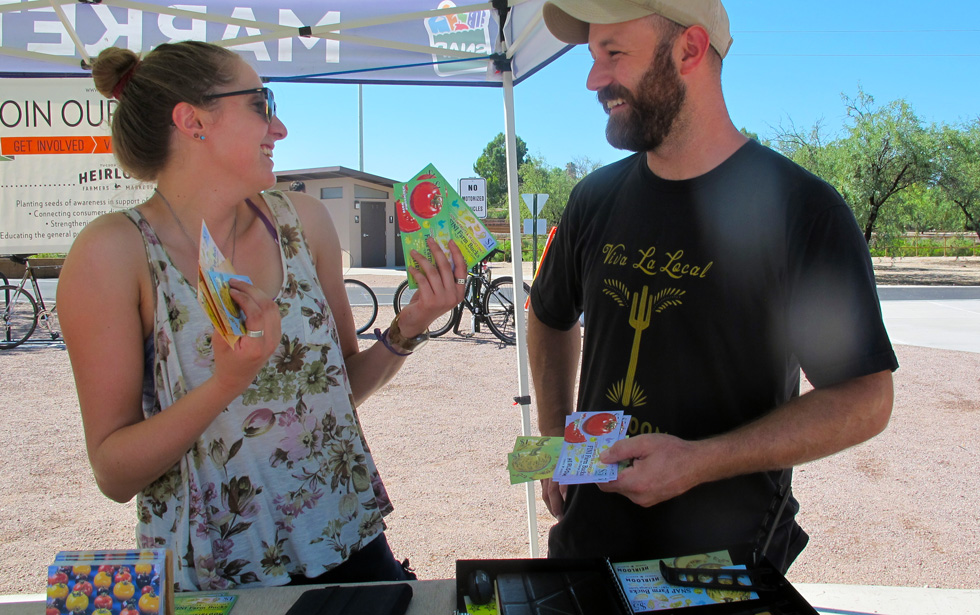 This one allows customers to withdraw their food stamps as market dollars which are matched dollar for dollar by community grant partners. “It’s a win-win,” explains Parker Fyler, who works with Heirloom Farmer’s Markets. “It’s good for our vendors and it enables them to double their money to buy fresh healthy food.” 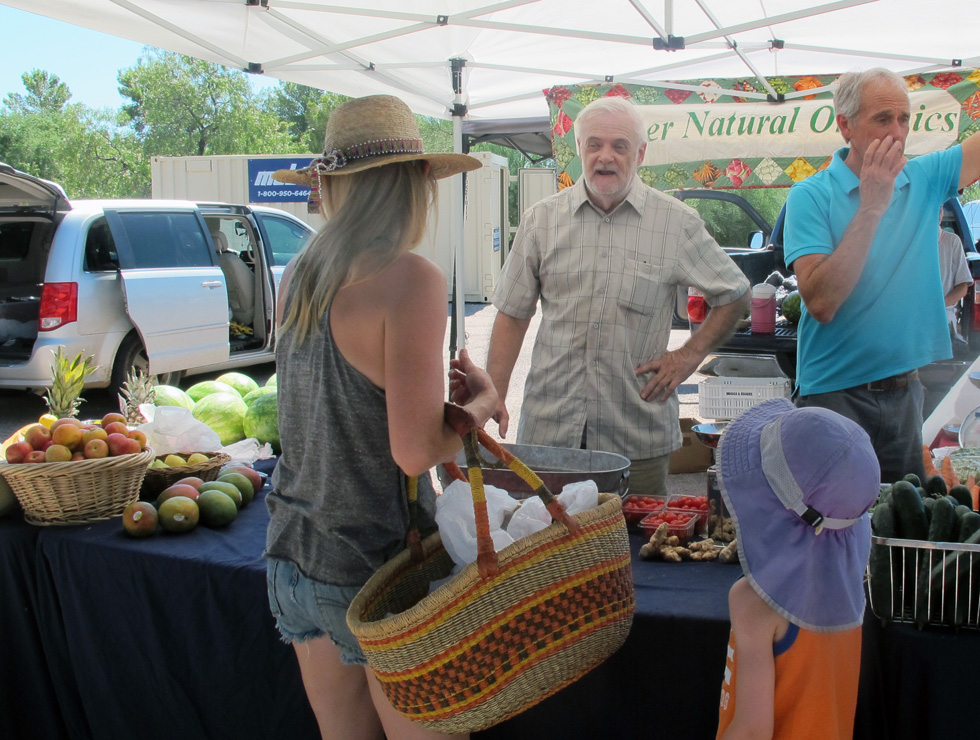 This young mum is able to buy organic food for her daughter using market dollars.

The city of Tucson built this outdoor market with large awnings to shade the vendors and customers from the relentless sun, and placed it beside one of Tucson’s impressive network of bike trails. 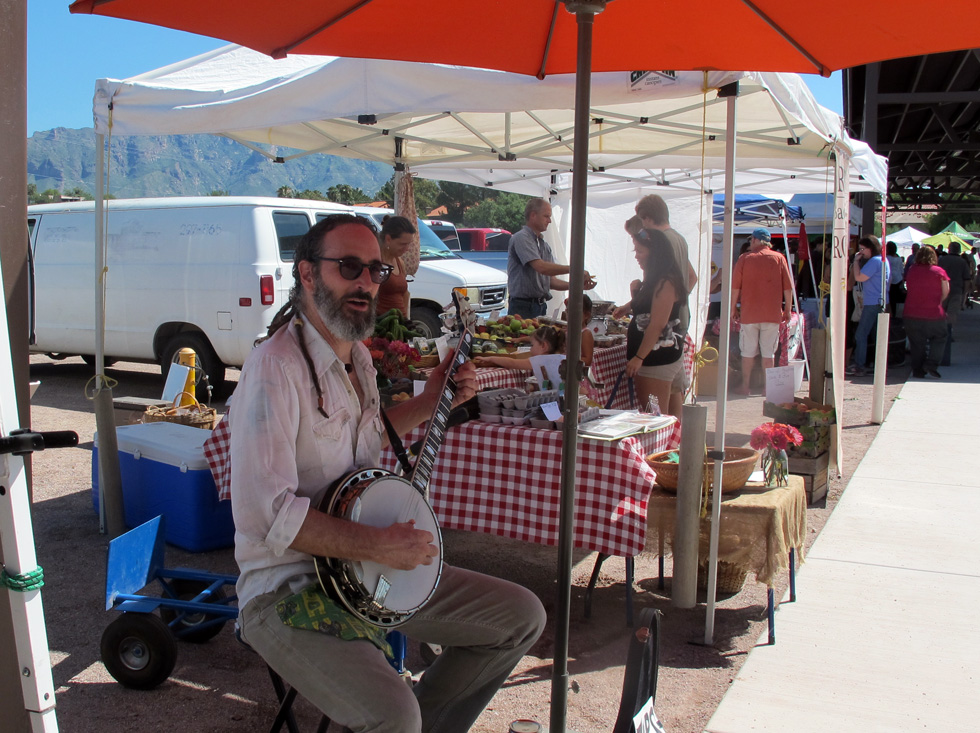 It speaks volumes about the city’s commitment to sustainability. And it’s one of the many reasons Tucson was recently designated a UNESCO City of Gastronomy, part of the Creative Cities Network. It’s the only such designation in the US or Canada.

The designation is about heritage foods and modern takes on them. And it’s about the farmers and foragers who preserve them and the chefs who use them. But it’s starts with the market.