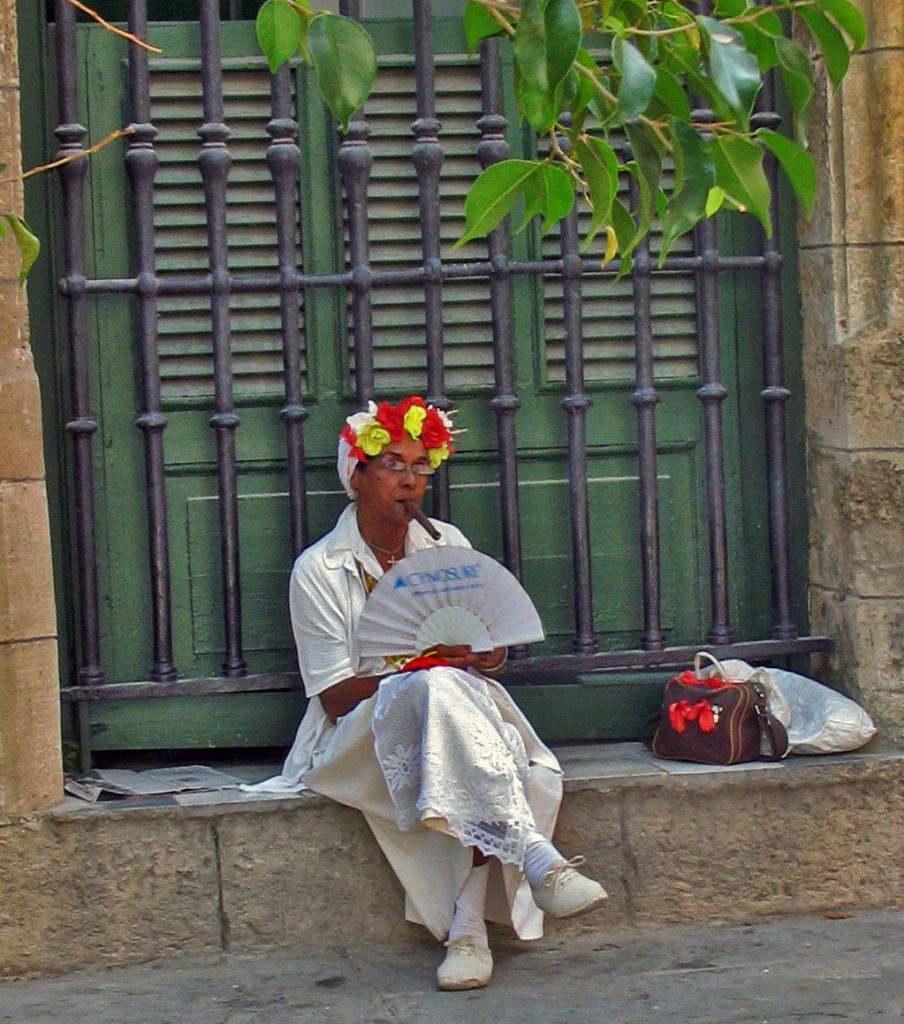 One of Havana’s famous cigar women poses for me. She is dressed in the traditional white of Santeria devotees.

There are several ways to finish the phrase: Cuban _  _ _.       Revolution!  Music!  Rum! But I’ll bet most people end with ‘Cigar’. Cuban cigars are considered, among afficianados, as among the very best in the world. 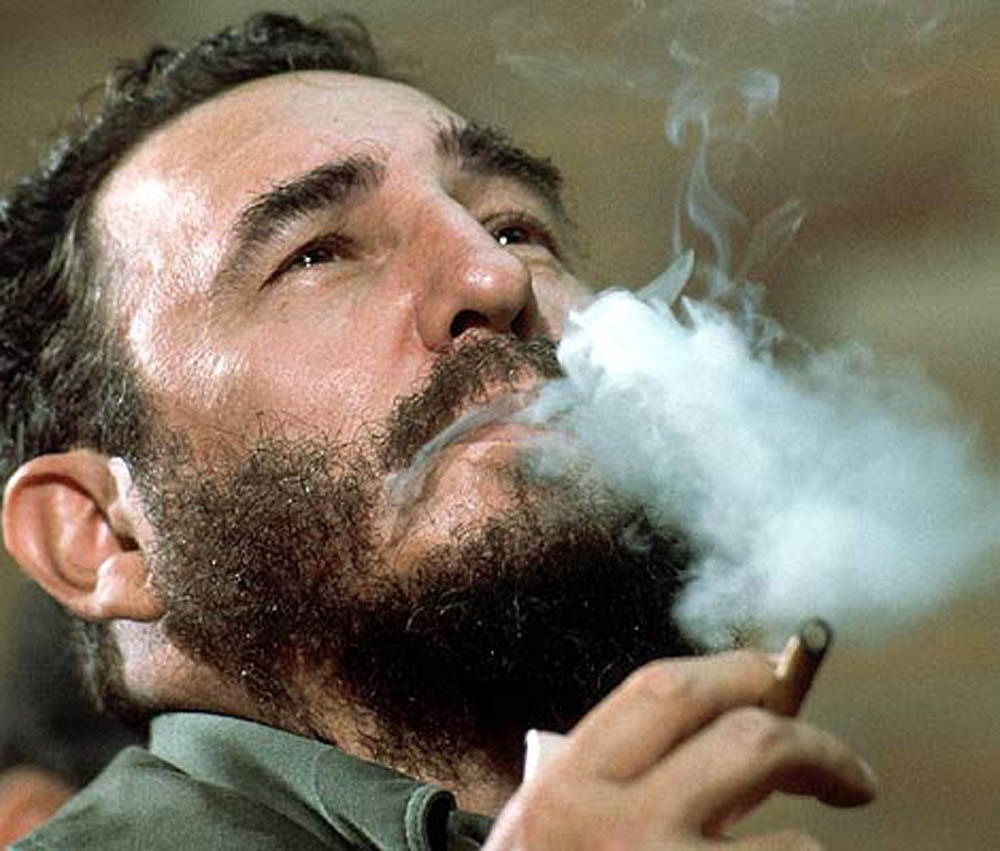 I often wonder if the reason Fidel Castro always had one clamped in his mouth for official occasions wasn’t to remind Americans that their embargo meant they couldn’t get these. But how did it all begin?

Forget Sir Walter Raleigh; Cubans will tell you it was native Cubans who taught Europeans to enjoy tobacco. In the early 16th century, explorers Rodrigo de Jerez and Luis de Torres reported to the Spanish court that Cuban natives wrapped dried tobacco leaves in palm or maize, lit one end and commenced “drinking” the smoke through the other. Jerez – not Raleigh – was probably the first European to get the tobacco habit, but history has forgotten him. 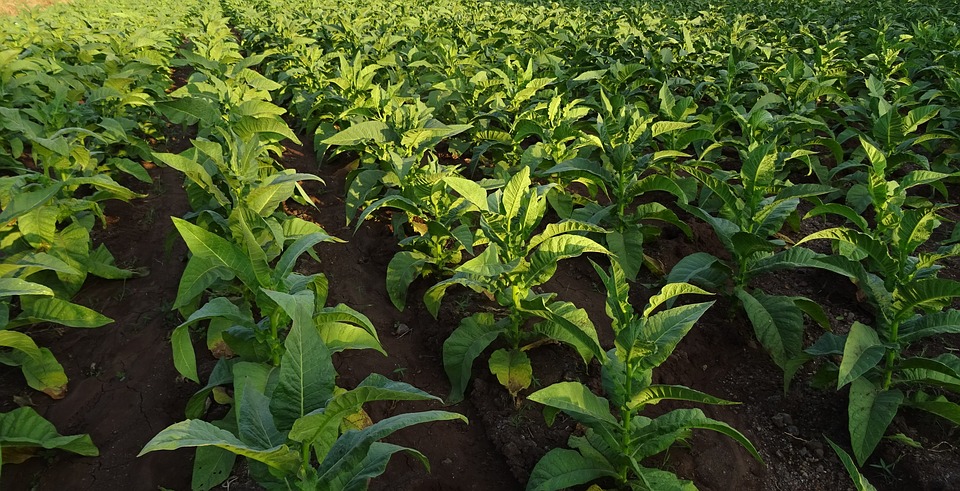 The plant – Nicotiana – was named for Jean Nicot, French ambassador to the Spanish court at the time. He brought tobacco back to France and Queen Catherine de Medici became a convert. He called it ‘herbe de la reine” or the queen’s herb. From there, it spread far and wide. It was actually the church, in the form of Cardinal St. Crove, who was responsible for the introduction of tobacco to Italy.

All tobacco is not alike. Just as great wines need exceptional grapes, so great cigars begin with fine tobacco. And just as oenophiles can pronounce on quality after just one taste, cigar afficianados need only a couple of puffs to determine if the tobacco is up to snuff. In fact, the creation of a great cigar requires many of the same steps as those which go into the production of a fine wine: cultivation in really good soil, harvest, fermentation, aging and handling by an expert. 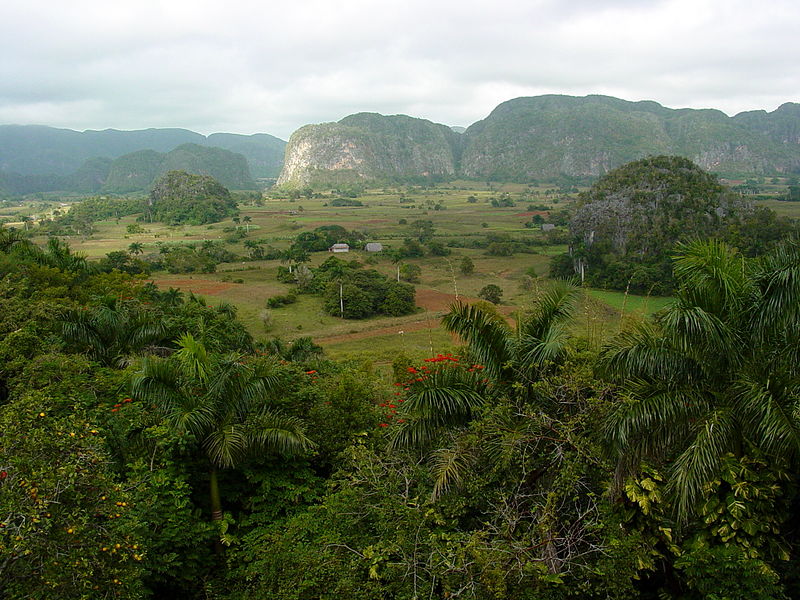 In Pinar Del Rio, in Western Cuba, tobacco grows in ideal conditions – not just any tobacco but the tobacco that produces the Cohiba and the Monte Cristo, the cigars of legend. Here, in the Viňales valley, a UNESCO Biosphere Reserve, the mist rises off the ethereal, steep limestone hills (mojotes) in the early morning but by noon the heat is fierce. 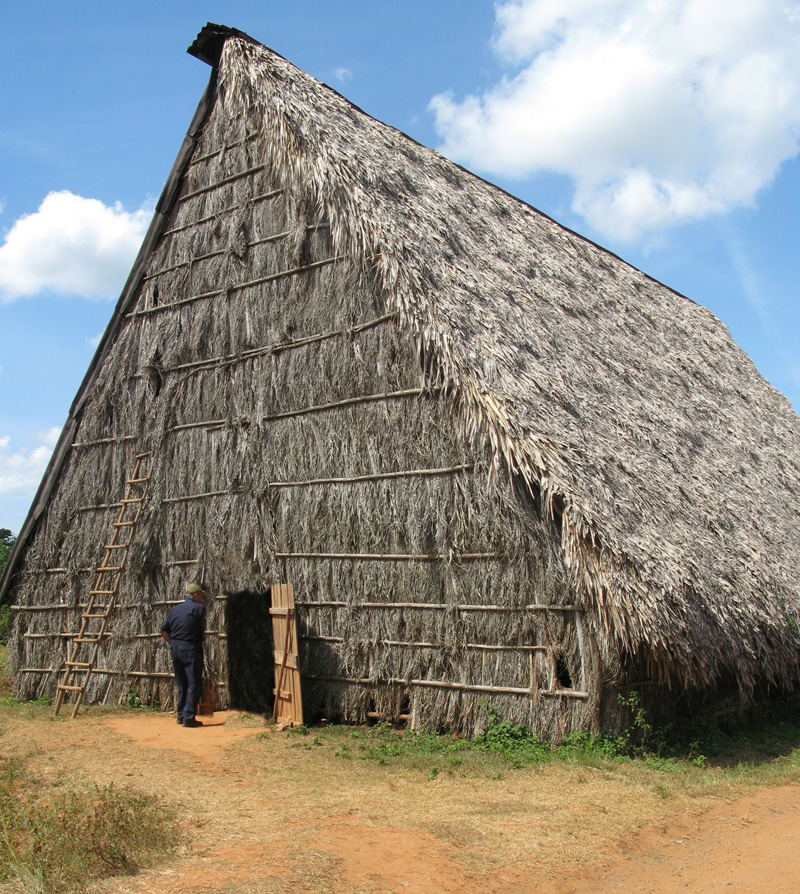 More than two thirds of Cuba’s tobacco is grown in the vegas (fields) here. And the landscape is dotted with characteristic conical curing sheds, most with palm leaf roofing which helps to maintain constant humidity and temperature. 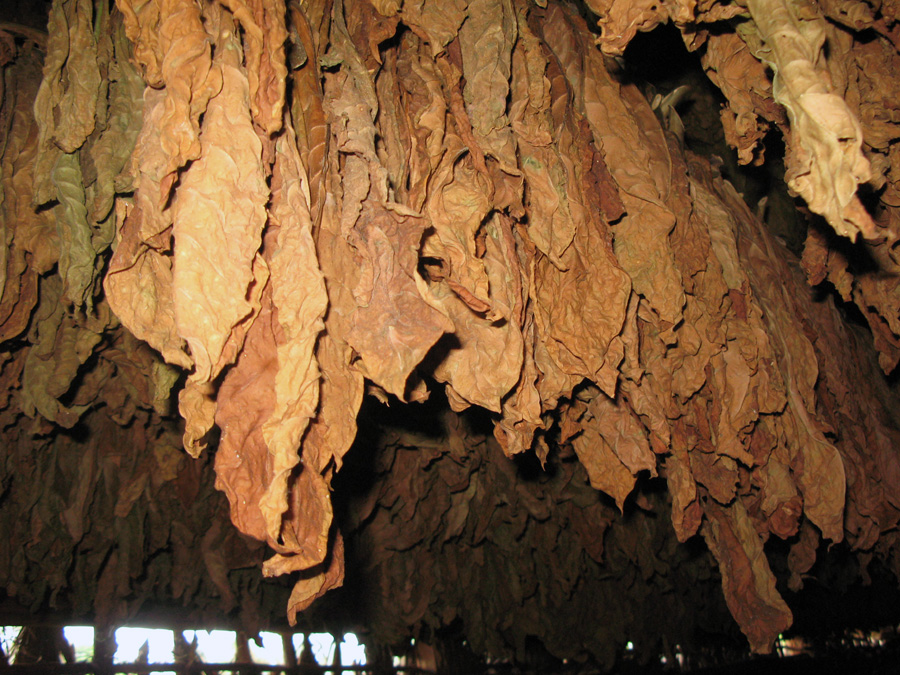 Tobacco leaves drying inside the shed

The late winter/early spring harvest is an important annual event; every plant is hand cut, either leaf by leaf, or the entire plant, and packed in bundles into the curing sheds where it remains for up to three months. The aim is to very slowly cure (not simply dry) the huge bundles of leaves. The air inside is warm and redolent with the scent of tobacco leaves. Each year, in Pinar del Rio, a huge fiesta celebrates this harvest.

The humidity at each point of tobacco production is critical and for Cubans who depend on Mother Nature to provide the correct conditions, it can also be a gamble. The next stage is the fermentation of the tobacco. The very best tobacco is fermented three times; this goes to make the Cohiba cigar, Cuba’s gift to the smoking world. “The third fermentation gives the fine aroma,” explains Leticia Cabrera, cigar expert at El Ajibe. 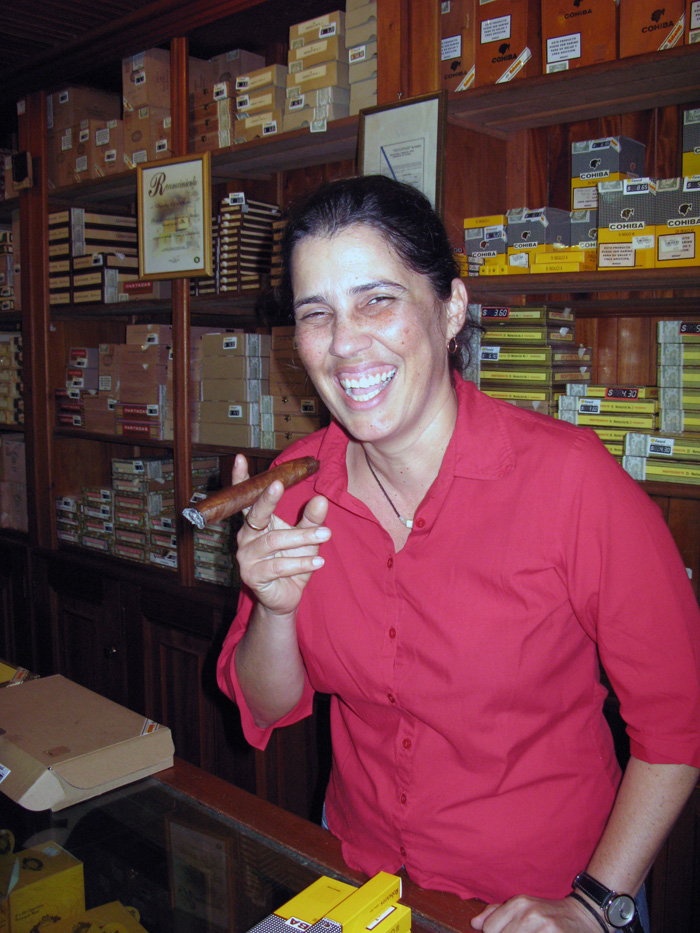 One of many cigar shops in Havana, this one is part of the popular El Ajibe restaurant. “Like wine, the fermentation is carried out in wooden barrels and the humidity is strictly controlled.” 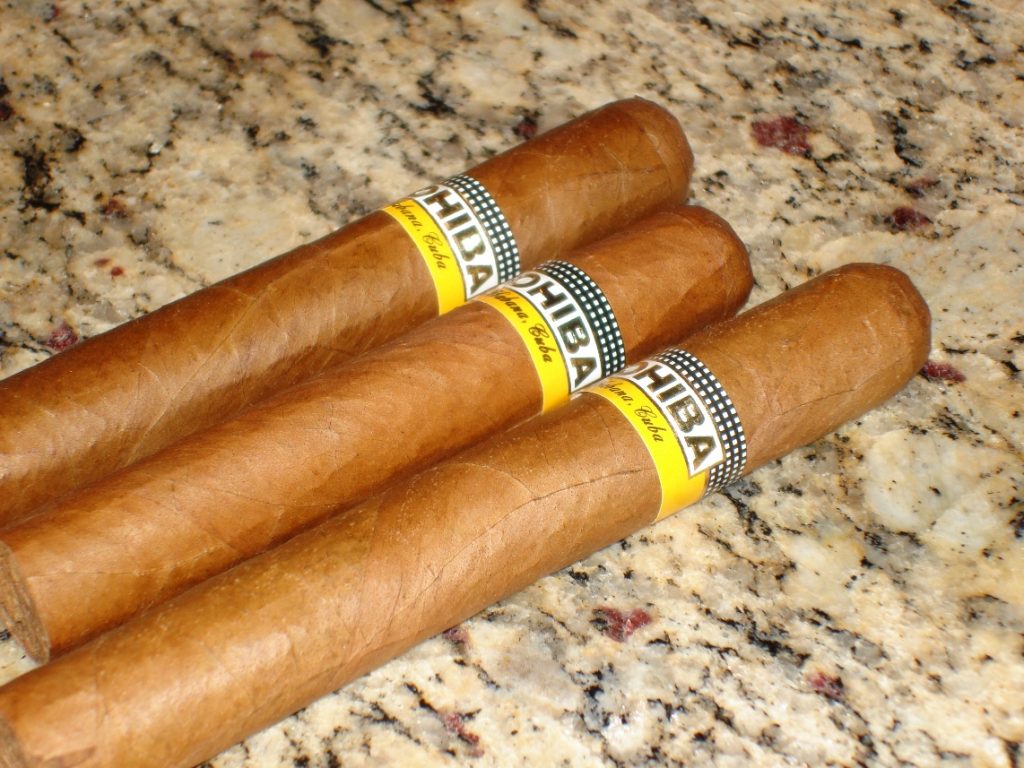 Cigars are also available on street corners but Cabrera cautions against buying these, “They may not be properly rolled and may be poor quality.” She goes on to explain that the number of leaves inside, the blends of different leaves from different parts of the plant and most especially, the top leaf, make the difference. “The top leaves of the plant give strength, the central leaves are for the aroma and the bottom leaves are for combustion,” she says. “The leaves that make the wrapper come from the underside of the plant because they’re more sheltered.” 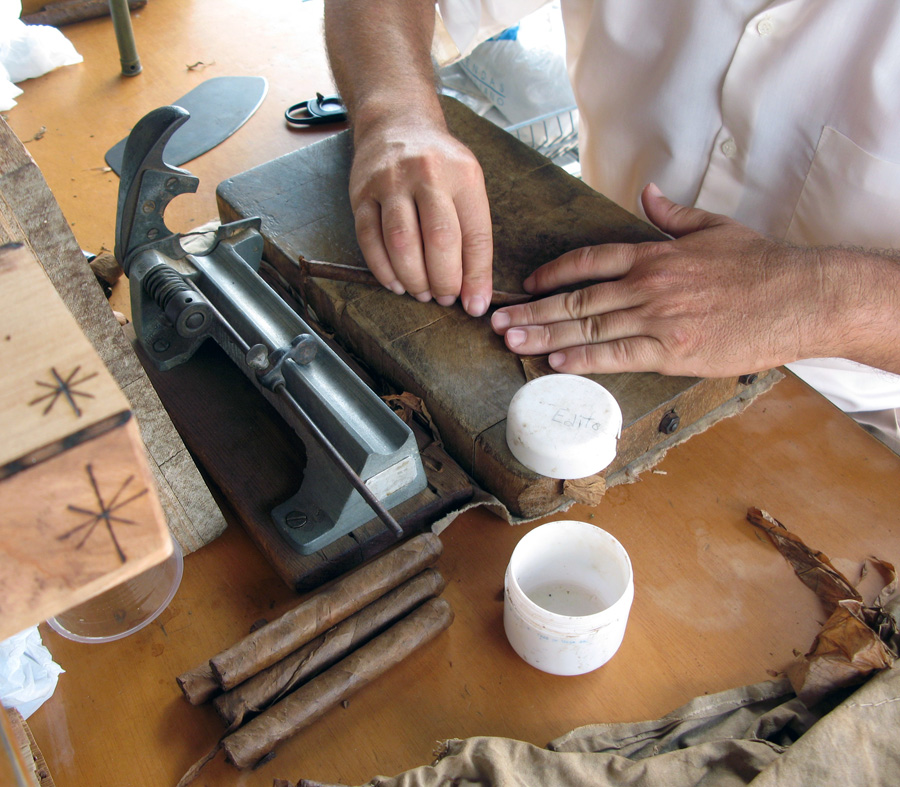 The Cuban Cohiba was originally made for Fidel Castro, and it’s only been since 1982 that this has been available for general sale. Beware of copies made in other countries sporting the same name. It is the most aromatic and is considered by experts to be the best. The Montecristo has a medium aroma and is bigger than the Cohiba. The lightest cigar is the Romeo y Julieta (a cigar named for star-crossed lovers?). Prices I observed in Cuba ranged from $4 to $20 apiece, but I understand that the same cigars in North America could cost three times as much! 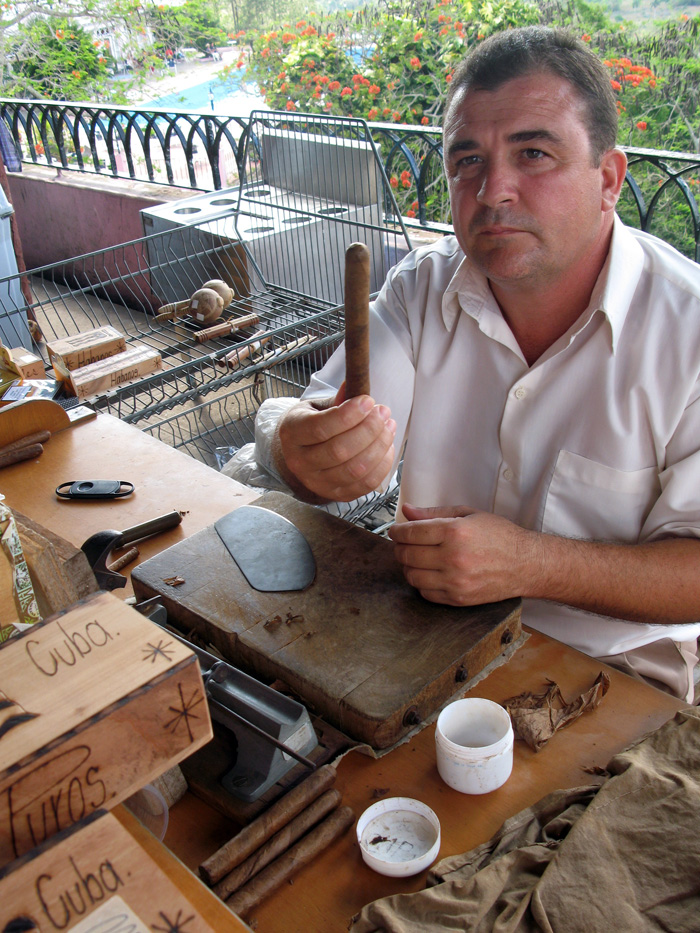 The finished hand-rolled cigar is just the right size and density.

What do you look for in a fine Cuban cigar? “Obviously the name,” says Cabrera. “And it should not be too soft, not too tight, not too heavy.” From this one can deduce that rolling a cigar is a bit of an art. 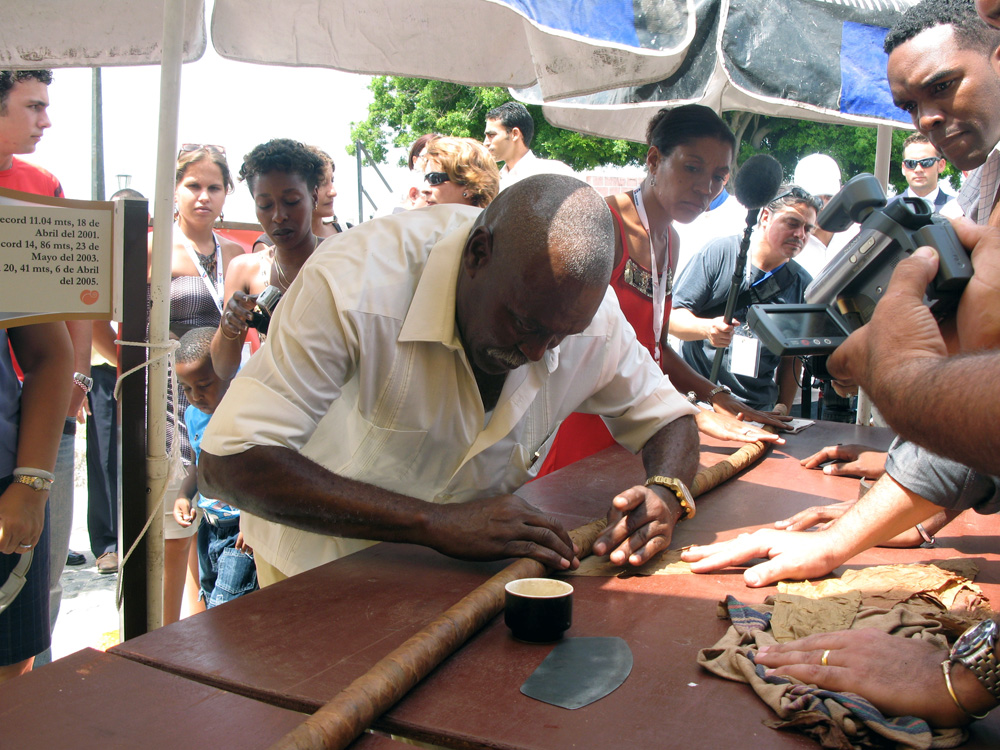 During the 2008 FitCuba fair, in the fort at Morro Cabaňa park, I watched Jose Castellar Cairo, holder of the Guinness Book of World Records record for rolling the world’s longest cigar (20.41 metres long in 2005), trying to break his previous record. With the help of a dozen or so people who roll the enormous length of cigar back and forth to shouts from the coordinator of “Delante!”(forward) and “Atrás!” (backward), Castellar Cairo adds tobacco leaves to the growing monster cheroot. The entire group carefully rolls it forward and back, allowing him to roll each new leaf into its length. 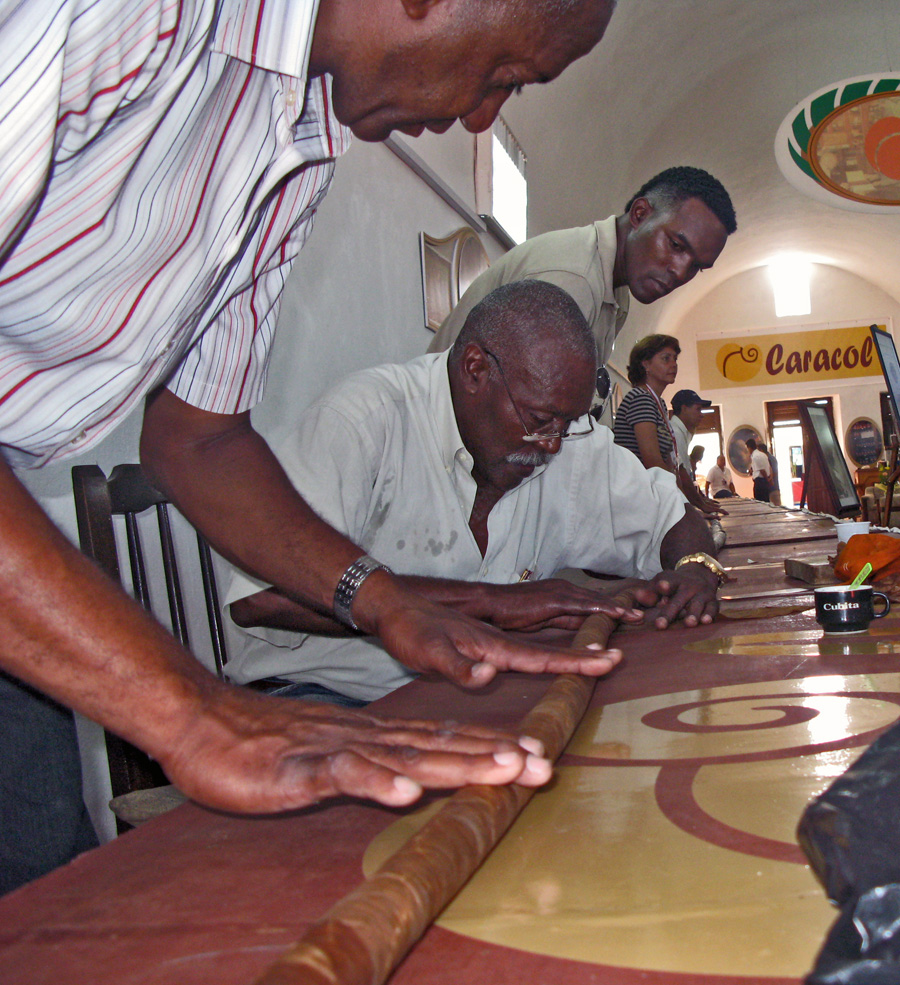 Look down the line – that’s a giant cigar being rolled!

On the last day of FitCuba, amid cheers and clapping, he rolls the final few feet to create 46-metre-long cigar – more than double his previous record! Would this cigar ever be smoked? “No, that would be impossible,” admits the exhausted Castellar Cairo. “It’s going to a museum.” 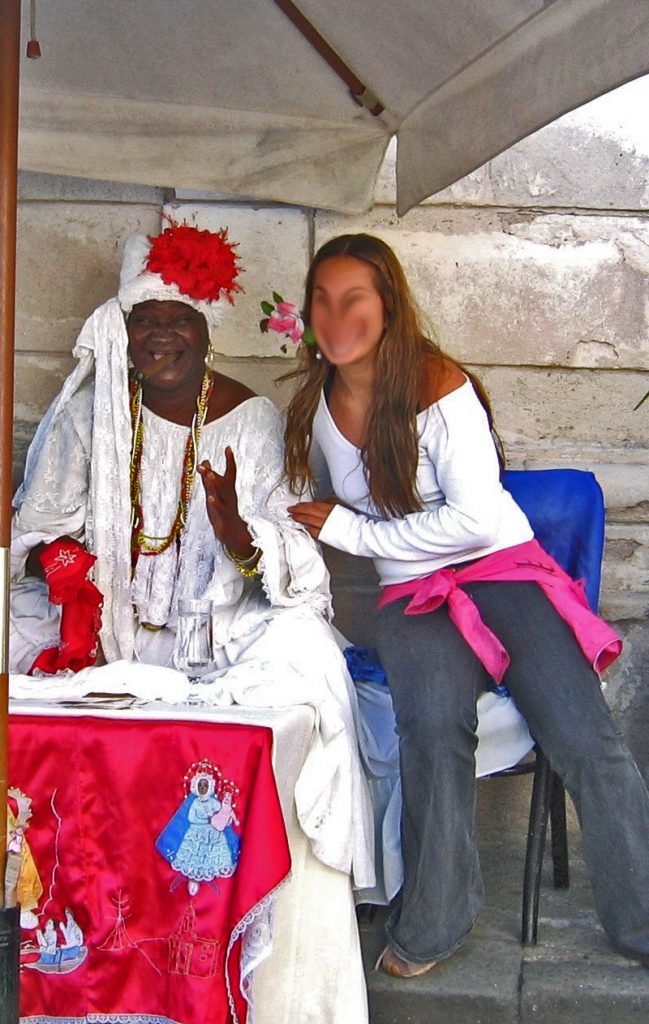 Cigar woman poses with a tourist

The cigar is not just for men. In the Cathedral Square in Havana, one of Cuba’s famed cigar ladies sits each day – an incongruous sight in her white finery and colourful flowers, a giant cigar clamped in her teeth. For a couple of pesos, she cheerfully poses with visitors.

There are many places where one can watch the rolling process and buy hand-rolled cigars, though they may not be as fine as Castro’s. The cheroot has become a crucial part of the culture and the economy of Cuba – and for most tourists, an essential purchase for friends. Where else can you buy the best in the world for a few dollars?