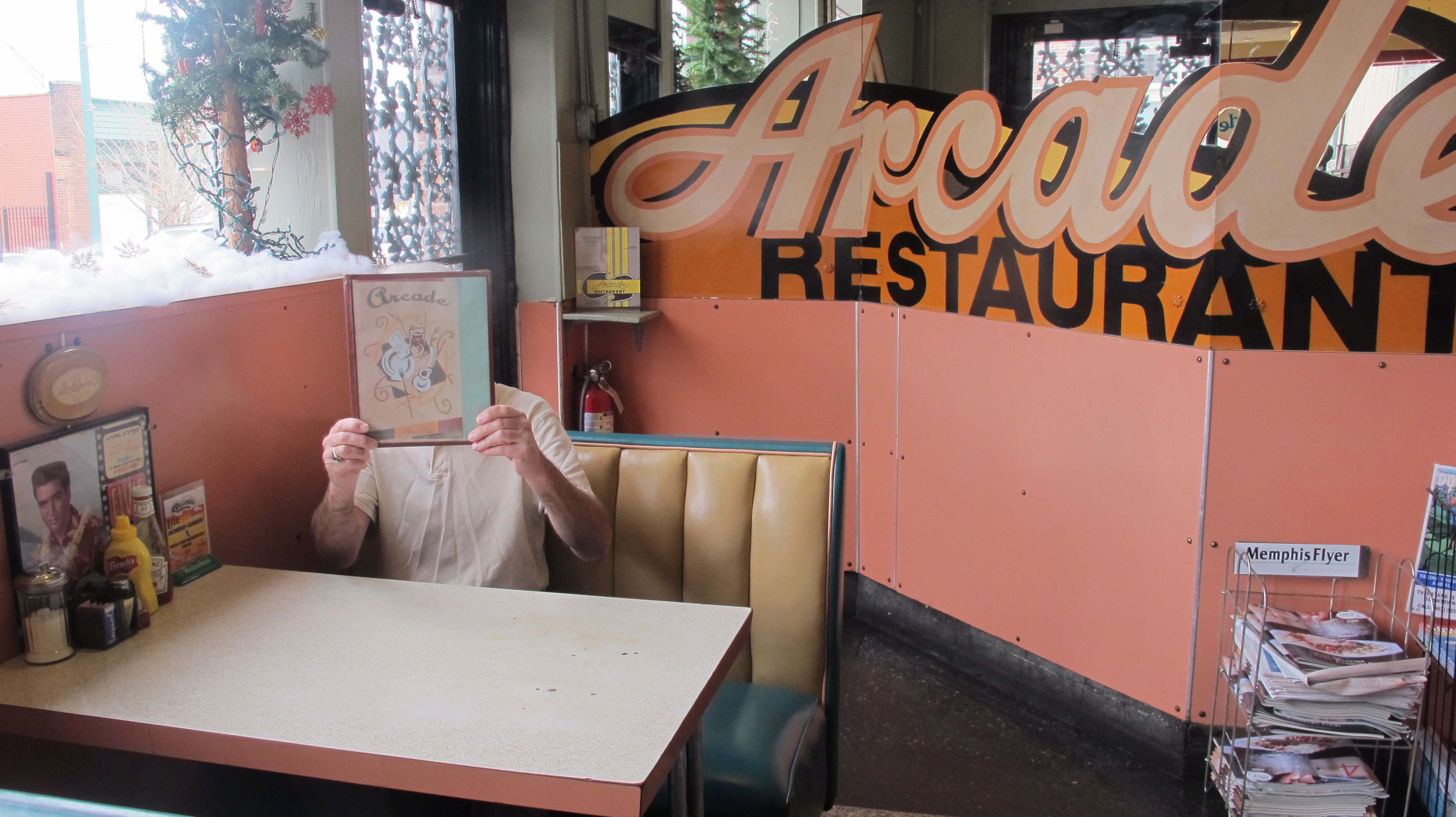 This was Elvis’ favourite booth. His picture marks his spot. Could be him, couldn’t it?

For the past month, as we have travelled across the top of the US on I-80, down through California and along I-40 to Memphis, our most recent stop, I have looked for authentic diners. In their heyday, during the first two thirds of the 20th century, nearly 7,000 diners dotted the American landscape. They were THE stop for travellers on classic roads like Route 66, or for those looking for a hearty, inexpensive meal in many cities.

Today fewer than 2,000 remain and most of those are in the east. So looking for one in the Midwest and west was like searching for a needle in a haystack. The fast food chains have supplanted this uniquely American institution in the hearts and appetites of Americans. So imagine my delight when, in Memphis, I found The Arcade, a diner that has been around since 1919!

Even more exciting, it hasn’t been remodeled since the 1950s, when it became utterly modern with Formica tabletops, turquoise and cream faux leather seats, and plenty of shiny chrome.

Famous for its big breakfasts, this spot closes at 3 p.m. But come in at lunch and it’s packed with locals. It’s just around the corner from the National Civil Rights Museum, which makes it a convenient stop.

Ed sat in the booth Elvis always sat in (see the top of the page) when we visited, and he ordered the classic breakfast – bacon, eggs, hash browns (grits were an option), biscuit and gravy. Grits and sausage gravy are a Southern standard, but we Northerners can’t seem to wrap our heads around gravy at breakfast. We have tried – and tried – but to no avail. However, Southern biscuits are melt-in-your-mouth yummy. 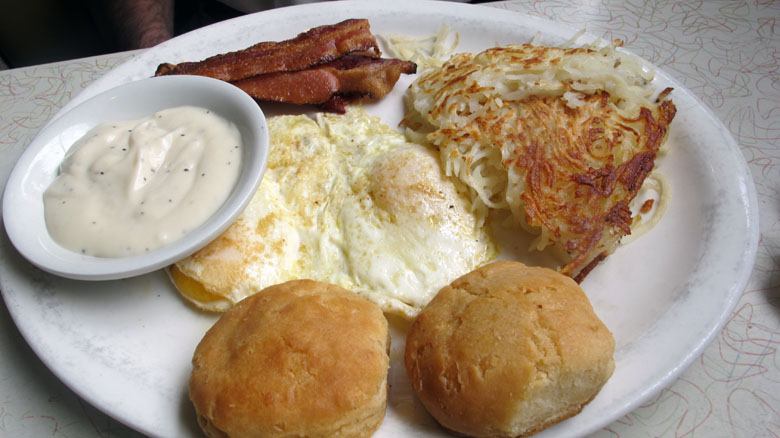 They key to diner cuisine is the whole homemade, non-fast food aspect. And given this, I have to add our other diner find – Joe’s Diner in Santa Fe. No, it’s not a 50s diner, though it looks just like one both inside and out. 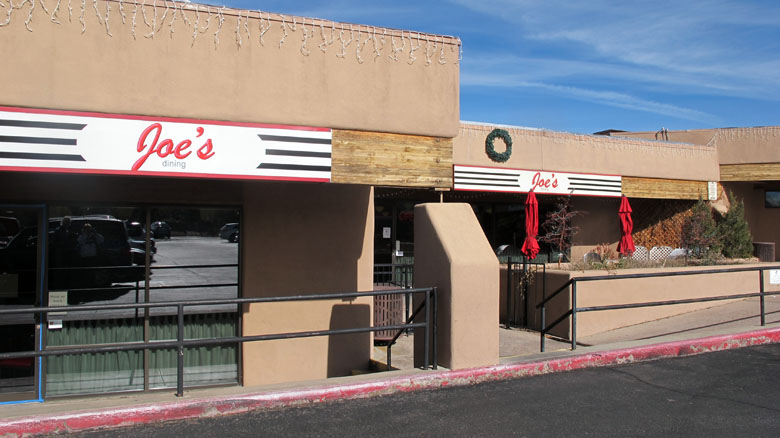 The interior has the neon light strips, chrome, checkerboard floor, and red chairs of classic diners and though it doesn’t date to the 50s, the effect isn’t contrived. 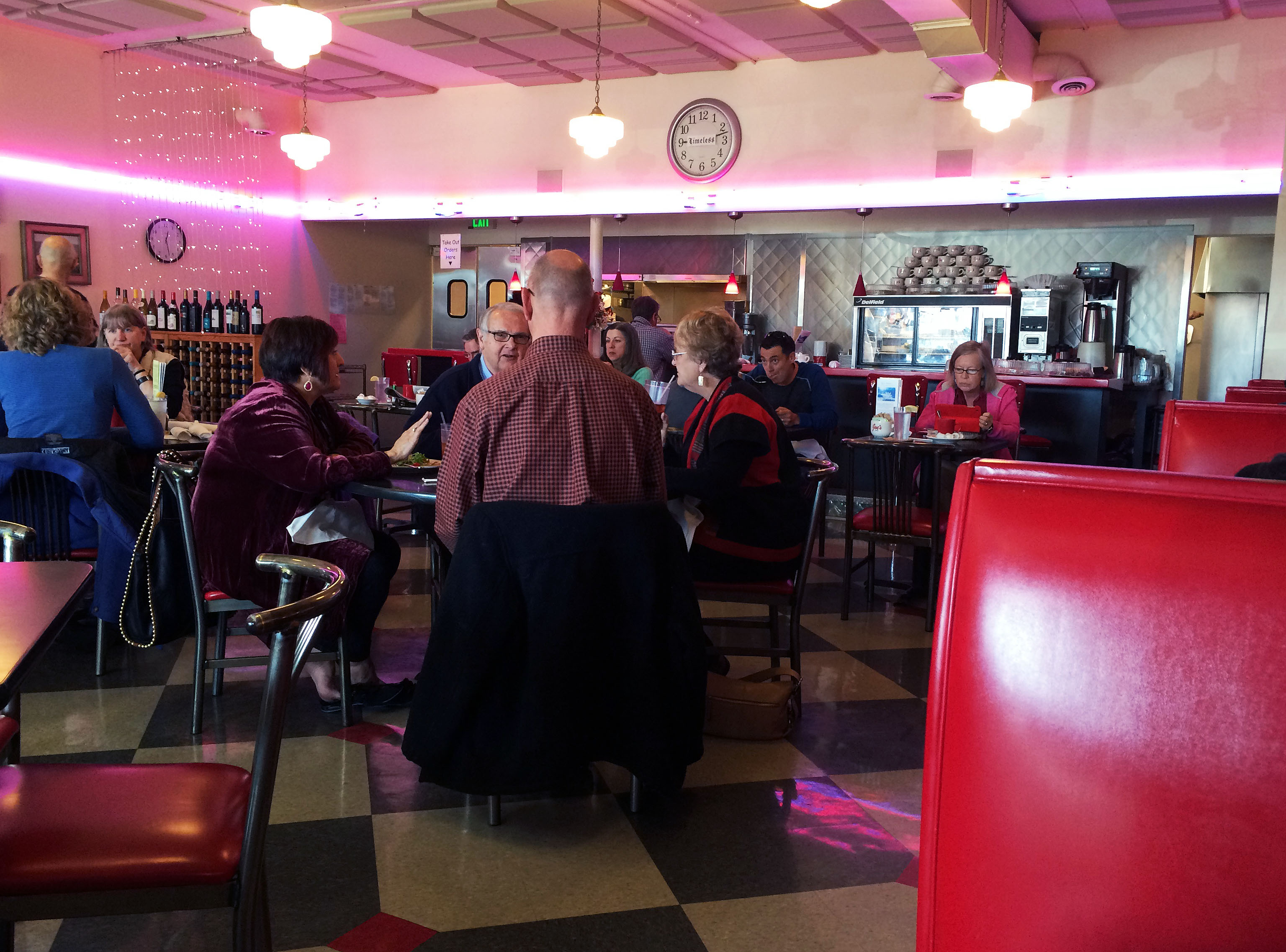 But Joe’s qualifies because of the food….freshly made, wholesome and hearty, and reasonably priced. And, as if that isn’t enough of a recommendation, Sheila Nixon (co-owner with husband Roland) is a Canadian transplant. 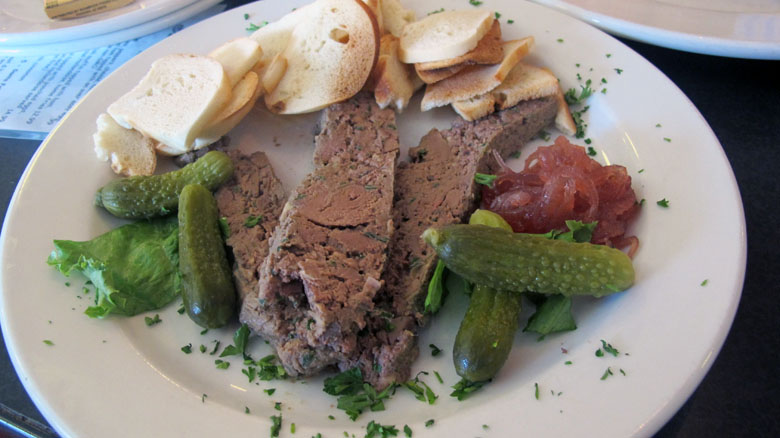 Now you won’t find the organic chicken liver pâté I ordered on most diner menus, but Roland’s is classic nonetheless. Coarsely chopped, meaty, and delicious, his is served with cornichons, crusty bagel chips and onion marmalade. Heaven! And Ed’s chopped steak is made with lean buffalo meat, and smothered in sautéed mushrooms and onions in classic diner style.

Another thing you won’t find in classic diners are Sheila’s newsletters which present her current concerns, thoughts and insights about food and the world around her. I love these – reading material for her customers. You can see them on their website. 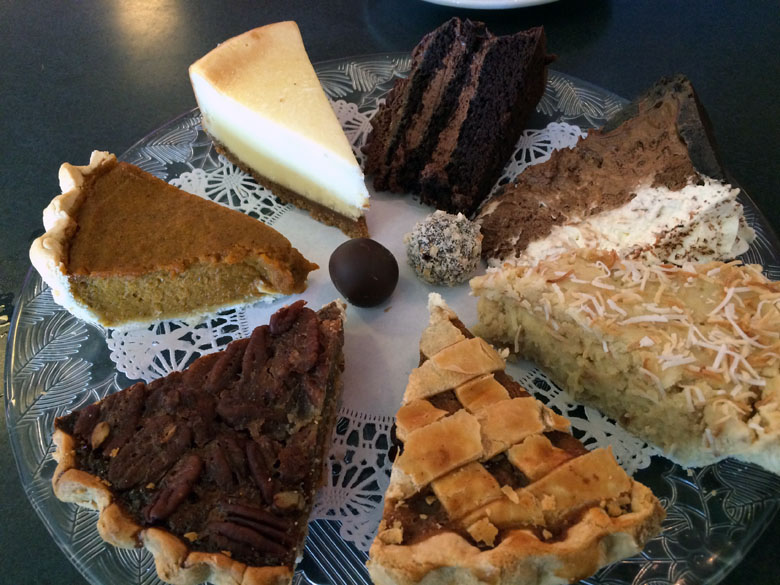 And then there are the desserts….the classic diner has a pie case filled with fat wedges of pies and cakes. Joe’s brings theirs out on a platter and I dare you to resist trying at least one. We had a chocolate mousse pie that was sinfully rich and is, in fact, made from the same recipe that Sheila learned from a classic New York eatery in which she worked a few moons ago.

Finally, I have to add one more spot that isn’t really old, but the jukeboxes in each booth are and every one of them plays only Elvis songs. I’m talking about the Rockabilly Café at Graceland – terrifically turquoise and chrome. The menu is pretty much burgers and dogs with fries – it’s an attempt to recreate the era in which Elvis was king. 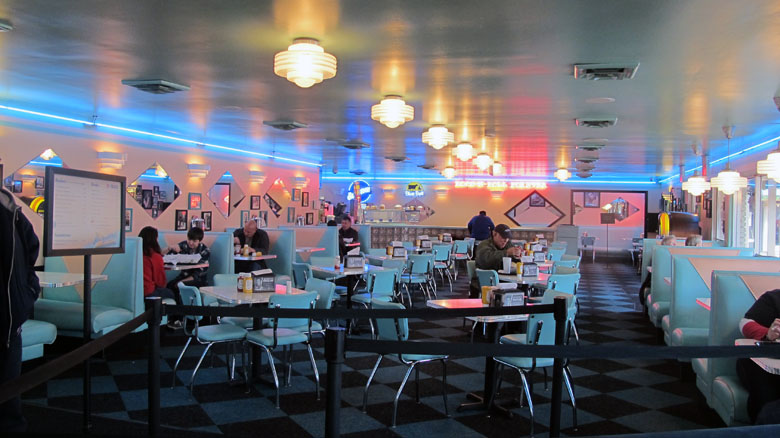 By the way, if you love diners, here’s an article about these American classics you might find interesting: Got to page 75 in the box: