When I was a young pre-teen, my mom bought me a poodle skirt with a felt record on the pocket. But instead of the one with Elvis on its label, mine had Vaughan Monroe. Vaughan Monroe!!! It was probably her way of trying to keep me from the brink of depravity – all that hip wiggling. But whenever I listened to The King, I would turn the skirt back to front!

I was a huge Elvis fan in those early days. No one moved like he did or sang with such gusto. I watched avidly when he appeared on Ed Sullivan – three times! Sullivan, who was initially reluctant to have the disgraceful hip-shaker on his show, pronounced after the last show, “This is a real decent, fine boy. We’ve never had a pleasanter experience on our show with a big name than we’ve had with you…. You’re thoroughly all right.” It probably helped that the ratings for the first show were off the charts – 80% of the TV viewing audience!!

But Elvis was undoubtedly a charmer. He knew how to say the right things, and when to invoke his “Aw shucks, I’m just a country boy” routine. 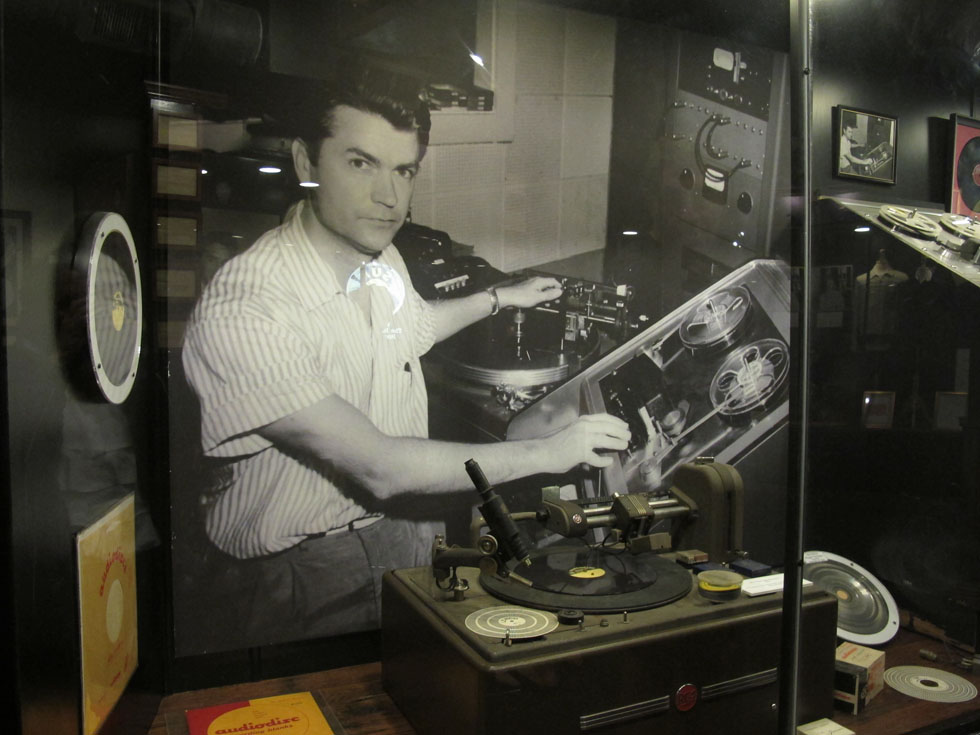 He charmed Marion Keisker, assistant to the creator of Sun Studios, Sam Phillips, who has often been called the “Father of Rock ‘n Roll.” He started the careers of so many rock artists. It was Keisker who suggested that the young kid who had been recording a song for his mama, might do the vocals for a session. That kid was Elvis. And the rest, as they say, is history – music history.

So it was inevitable that, finding myself near Memphis more than 50 years later, I simply had to visit Graceland. Bought by Presley in 1957, the gracious, white columned mansion with its iconic wrought iron gates of musical notes, has become something of a Mecca for Elvis fans. 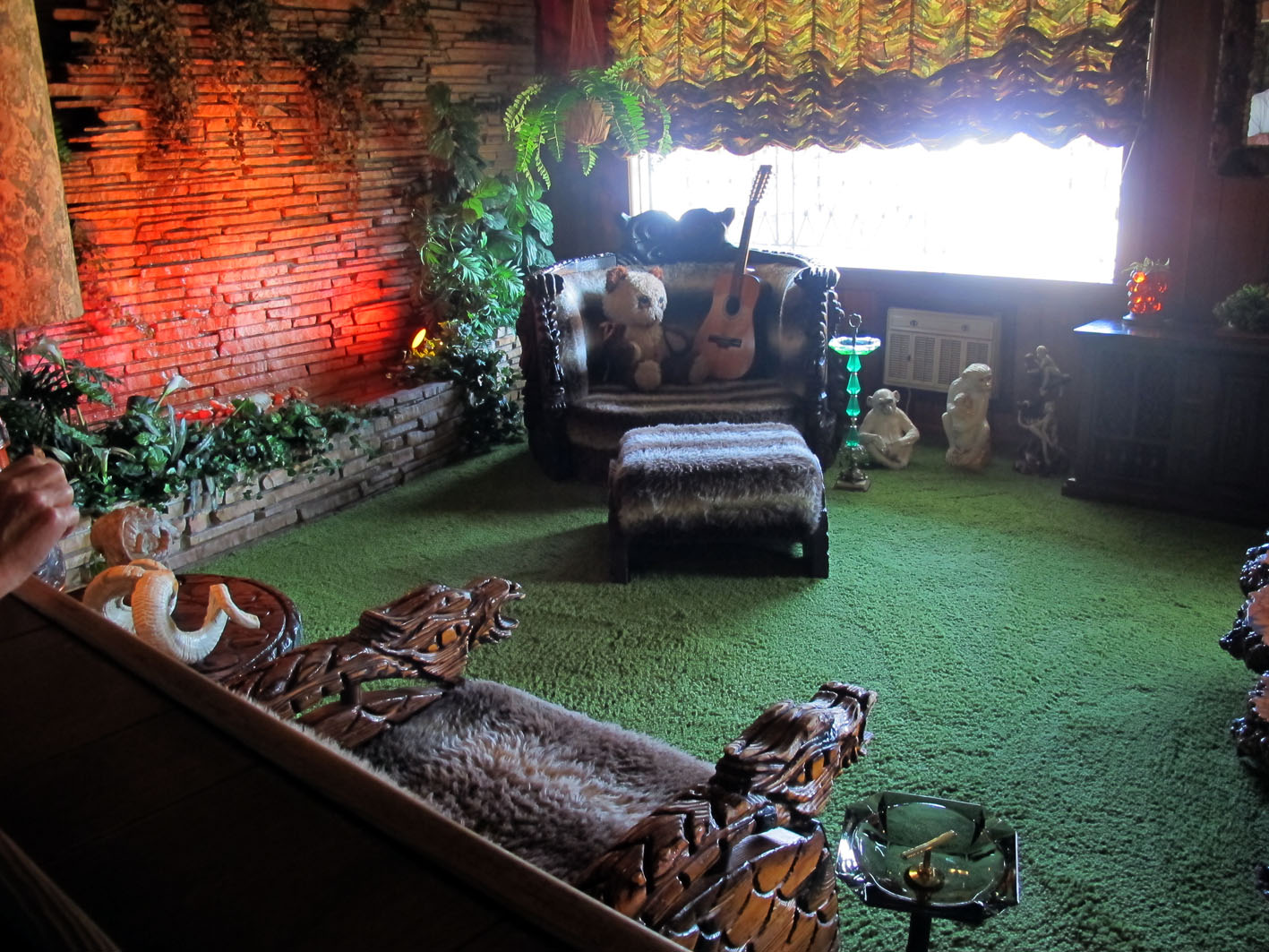 The decor is classic 50s – lots of gold, green shag, red lights and ornate carved wood furniture….so he had lousy design sense. In today’s minimalist age, it all looks a little over the top. 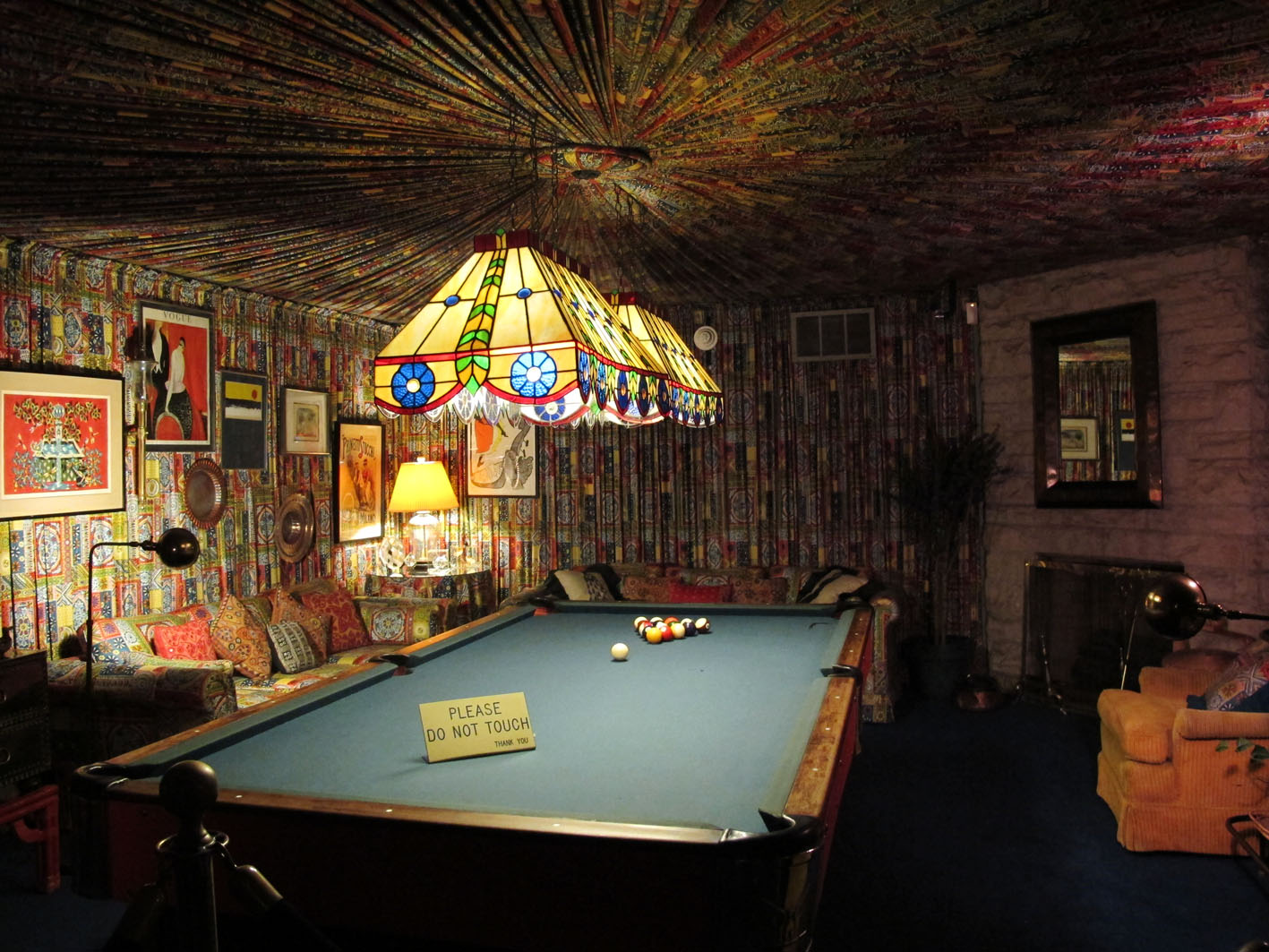 Fabric on the ceiling? Sooo 60s.

His personal plane with its seat belt buckles of real gold and flashy bathrooms are the stuff of 50s fantasy. And his collection of cars, motorcycles and other motorized toys would probably bring palpitations to the heart of any red-blooded American boy. But for me, the highlight was seeing the displays of Elvis memorabilia. 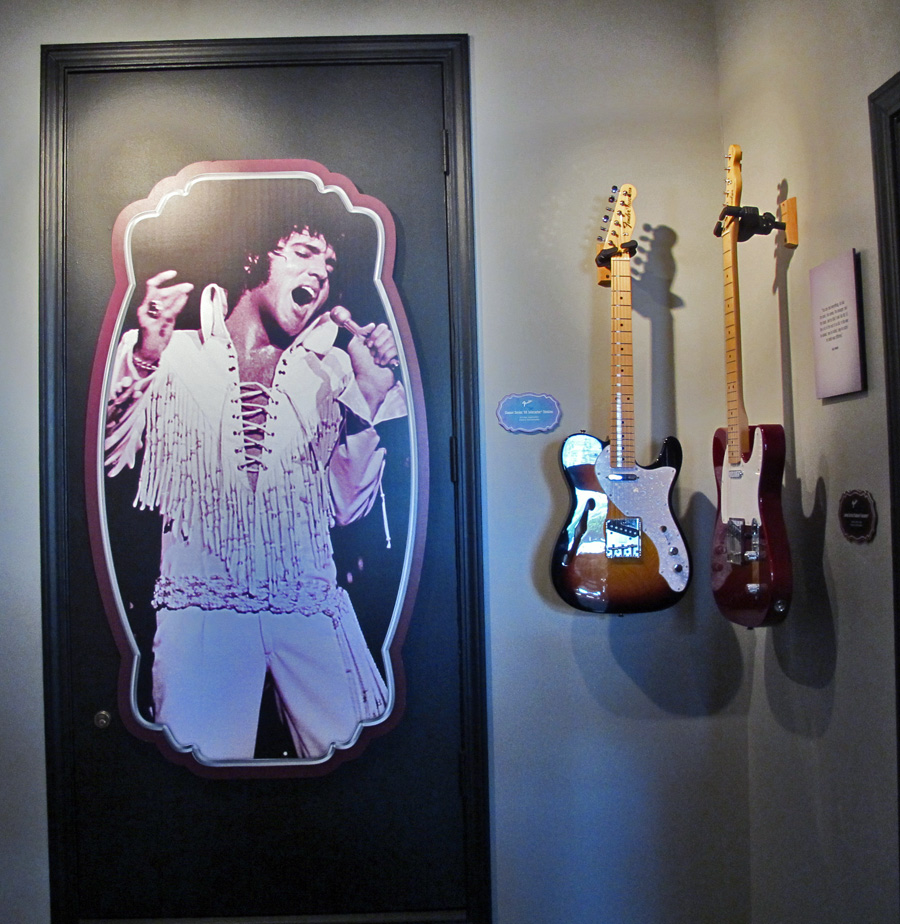 Hundreds of pins and buttons (including one in Yiddish with ‘Oy Gevalt Elvis’ – translation in today’s idiom: ‘Omigod, Elvis’), his guitars and his clothes (those incredible suits with their six-inch gem-studded belts) are on display. In one of the Graceland shops, one can even buy a replica of his flashy nail jumpsuit, complete with cape, for about $2000!

Fan though I was, I had no idea how many awards and honours Elvis actually received in his lifetime. Row upon row of his gold records and prizes line a long corridor and cover the walls of what used to be his racquetball court. It’s extraordinary. 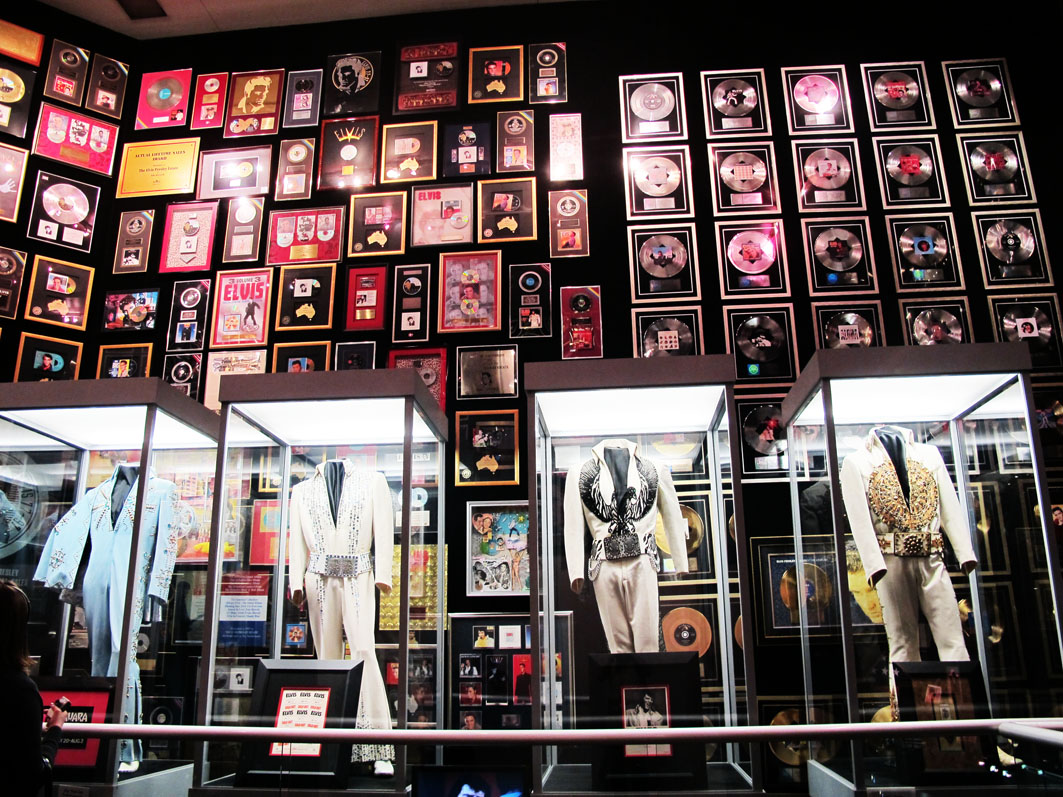 The graves of Elvis, his parents, his brother Vernon, and even his stillborn twin, Jesse, can be found in the Garden of Meditation, once his favourite retreat. Fans stood, with tears in their eyes, contemplating his last resting place. 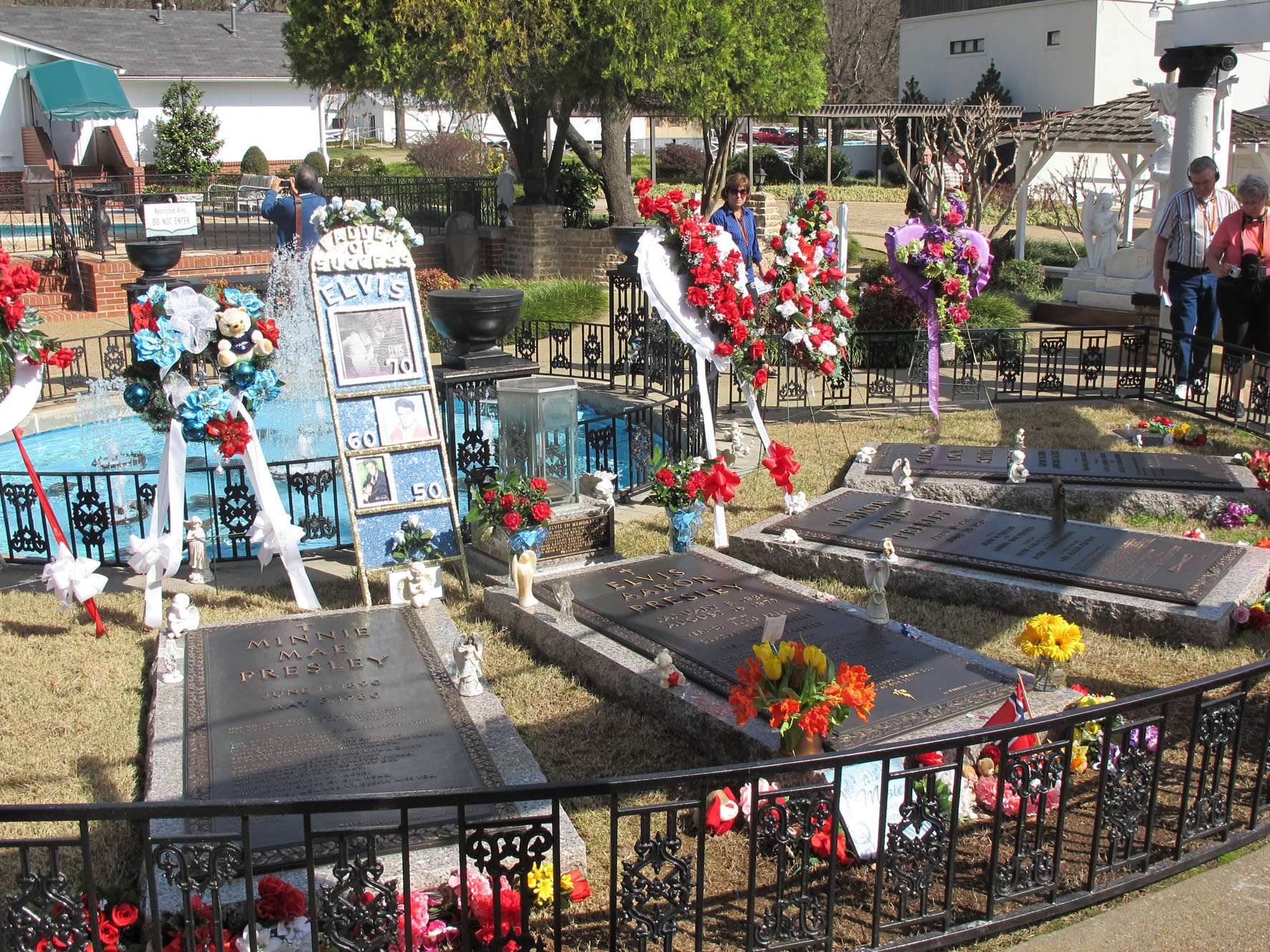 A shuttle takes visitors to Sun Studios, now a museum. In the recording studio, I stood on the spot (it’s marked with an X) where Elvis stood to record those first hits – or so they told me! And there, I first learned about The Million Dollar Quartet. 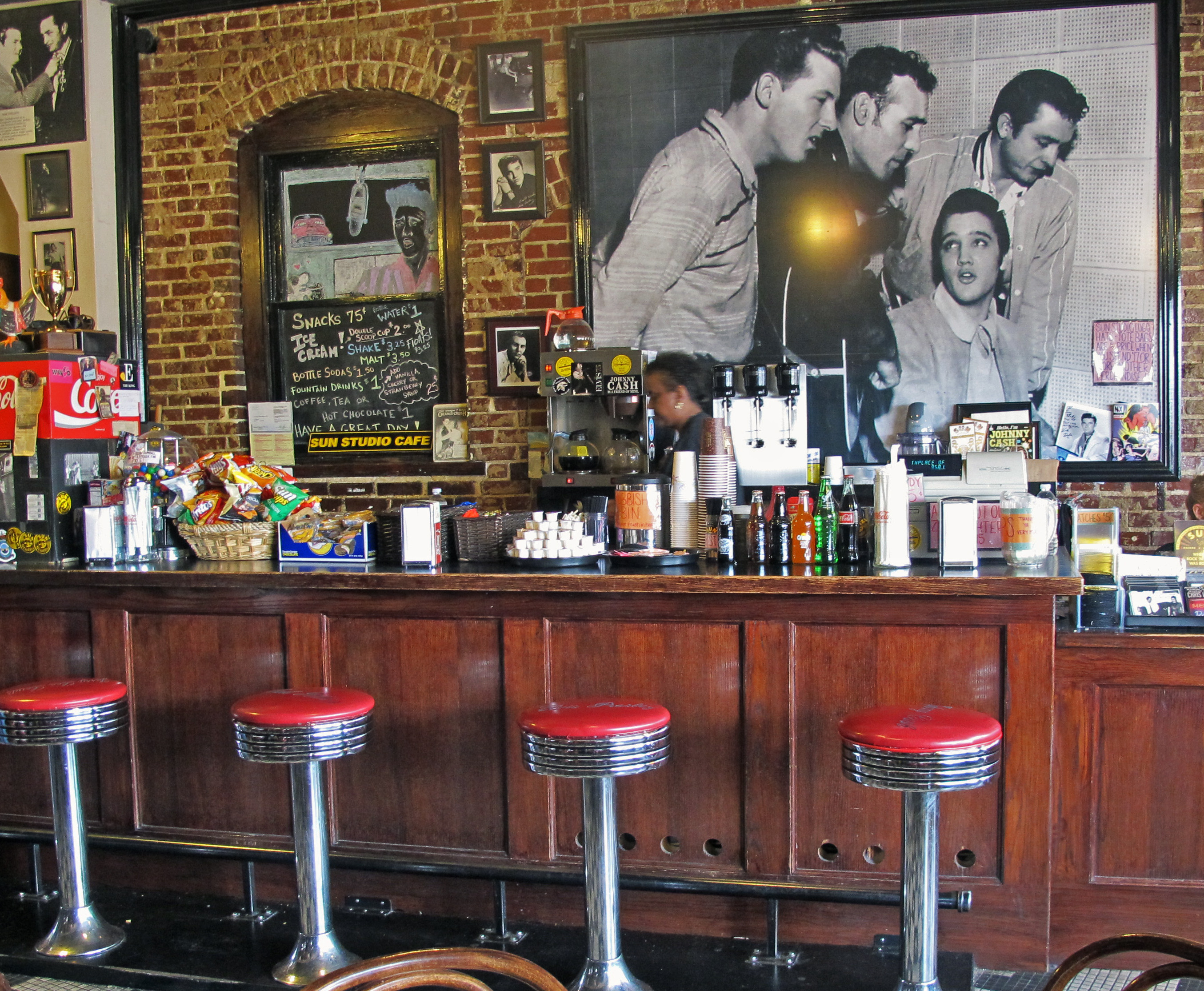 On December 4, 1956, Elvis joined in an impromptu jam session with three other Sun artists – Carl Perkins, Jerry Lee Lewis and Johnny Cash. It lasted four hours and Sam Phillips recorded the whole thing. They sang rock numbers like Blue Suede Shoes, classics like White Christmas, and gospel songs like Peace in the Valley. In between, they chatted and joked. It became known as The Million Dollar Quartet.

The original recording was suppressed for decades because Elvis was under contract to RCA, but that recording was released eventually. And in 2006, RCA’s 50th anniversary issue of the session contained approximately twelve minutes of previously unavailable material. The source of the recording was a copy of the session owned by Elvis Presley himself. In one scrap of conversation, Elvis describes the young Jackie Wilson, whom he had just seen imitating him in Las Vegas. The King pronounced Wilson’s smoky version of Don’t be Cruel better than his own!

I even got to preten I was part of a recording session at Sun Studios…that’s the actual microphone Elvis would have used – or so they tell me! 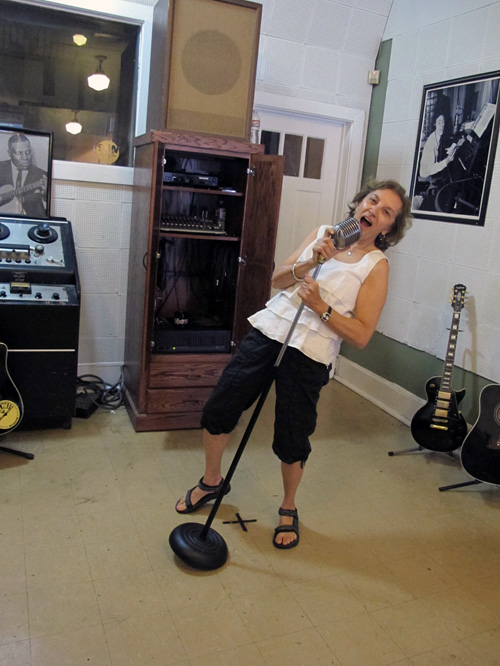 The Million Dollar Quartet is now a Tony-award winning musical. I could say that for those of us who grew up in the Elvis era, the show is a must-see. But the reality is that Elvis has been part of the lives of everyone born since he first gyrated his way around the stage.

Indeed, a telling exhibit at Graceland – Icon – features performers who were influenced by Elvis, with comments like John Lennon’s:  “If there hadn’t been an Elvis, there wouldn’t have been the Beatles.” So many artists – from Buddy Holly and Elton John to Roy Orbison and Sam Cooke – were impacted by Elvis.

In fact, Elvis not only influenced the music of my generation, but that of every generation since. Bono sums it up, “He was my greatest inspiration.”

More about Elvis and Memphis.