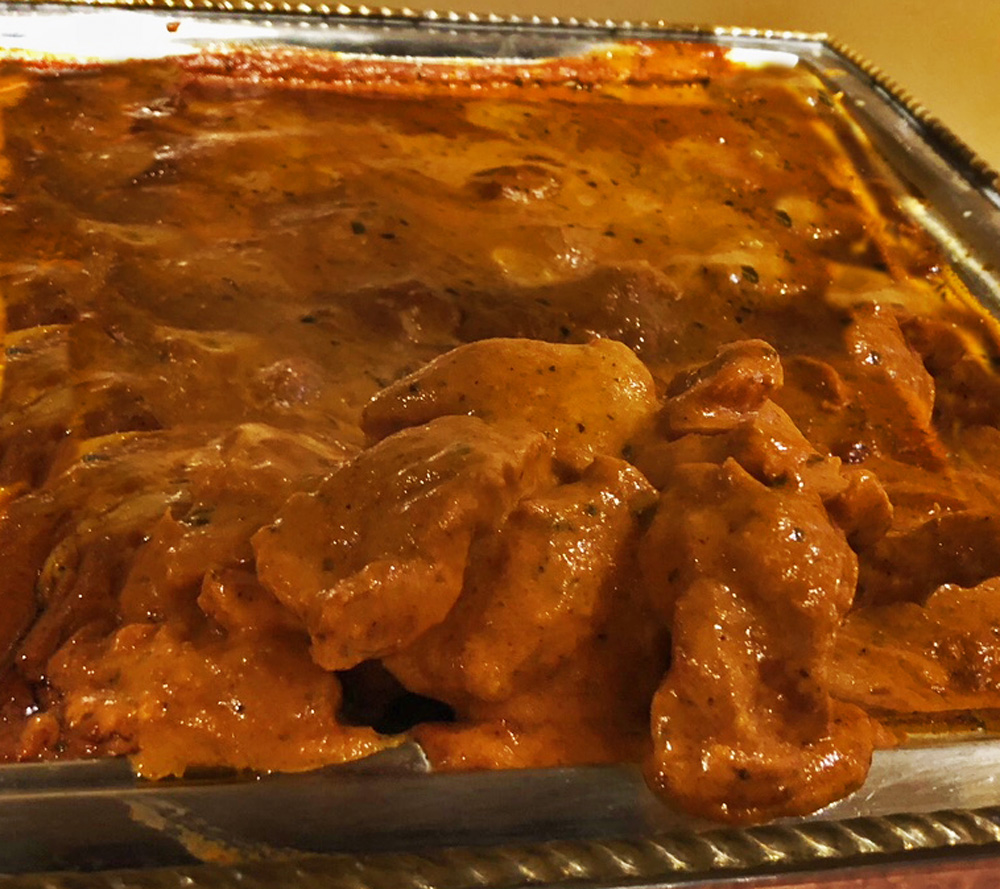 Rich, creamy and delicious, Butter Chicken is a decadent dish from North India.

Although a relative newcomer in India’s diverse and spicy food history, Butter Chicken has become a favourite dish on Indian buffets the world over.

Gaurav Kapoor (fondly known as GK) grew up in New Dehli, India, and trained in some of the best kitchens of his native country. Now, as Executive Sous Chef at the Chelsea Hotel in Toronto, Canada’s largest hotel, GK has tailored a lunch buffet with the flavours of North India. Served daily in T Bar Lounge at the hotel, a cornerstone of this daily fare is Makhani Chicken, familiarly known as butter chicken.

Butter Chicken was invented in the 1950s by Kundan Lal Gujral, who is also credited with creating tandoori chicken – skewers of marinated chicken cooked in the super hot tandoori oven used traditionally for breads (like naan). Rather than wasting leftover cooked chicken,Gujral created a ‘gravy’ of tomatoes and cream and Butter Chicken was born.

Mildly spiced and slightly sweet, butter chicken doesn’t have the spiciness of many Indian dishes and note that Chef GK doesn’t use onions for this dish. “You don’t need onions,” he explains. “The flavour is mild and not overpowering.” He uses his own garam masala (a powder made from a blend of spices), though one can buy these in an Indian grocer. 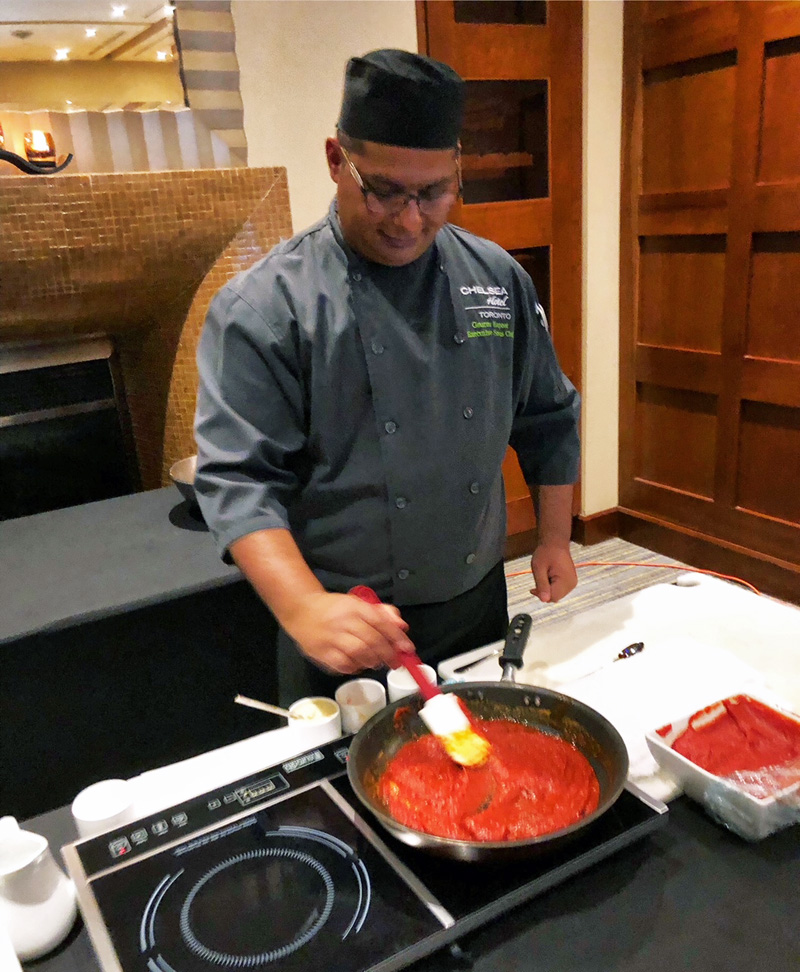 GK’s Butter Chicken sauce is rich and creamy, buttery and smooth. I am happy just to enjoy the sauce with some naan bread or plain rice. By the way, Kundan Lal Gujral’s restaurant, Moti Mahal,in New Delhi has attracted the patronage of such luminaries as Richard Nixon, John F. Kennedy and Gordon Ramsay. And if the restaurant name seems familiar, it might be because there are more than 100 Moti Mahal franchises around the world.

At a meeting of the Society of American Travel Writers at the Chelsea Hotel, GK gave us a lesson in preparing this quintessentially North Indian dish his own unique and delicious way.

For the Butter Chicken

Apply a mixture of the chili powder, salt and lemon juice to the chicken. Set aside for half an hour in the refrigerator.

Hang the yogurt in a clean muslin cloth for 30 minutes to remove excess water (or use substitute). Add remaining ingredients and blend. Apply this marinade to the chicken and refrigerate for 3-4 hours.

Preheat oven to 400F. Cook the chicken in preheated oven (or moderately hot tandoor) for 15 minutes or until almost done.

Baste with the 2 tbsp butter and cook for another 5 minutes. Remove and set aside. 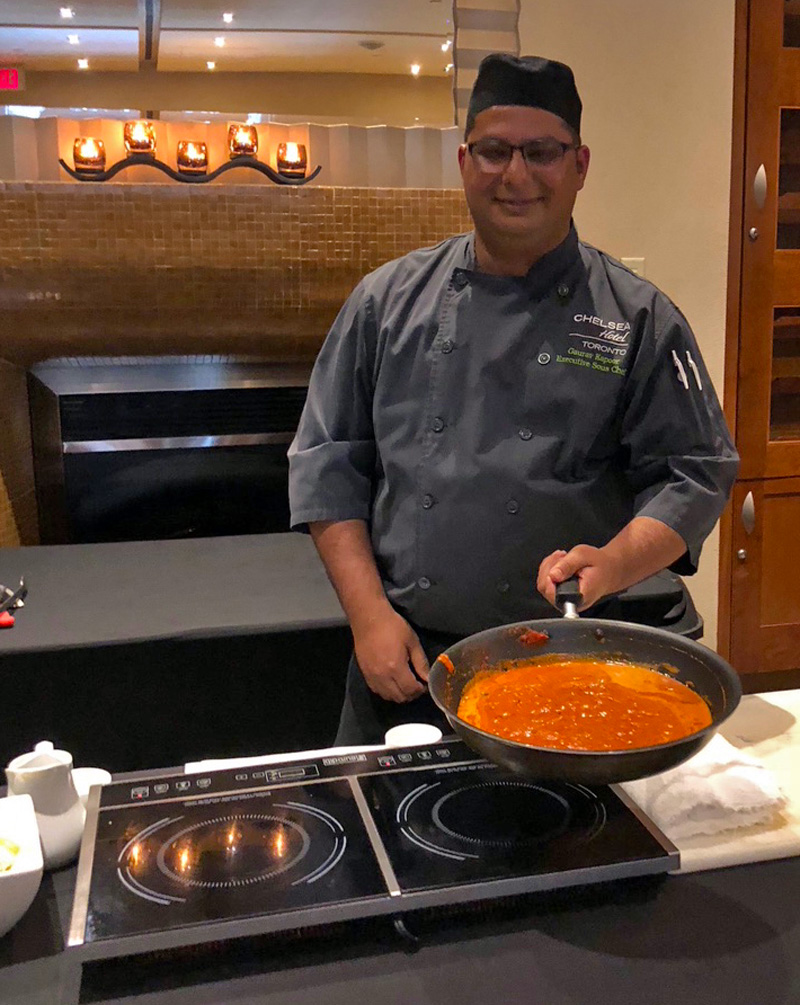 You know the sauce is ready when the butter starts separating

For the Makhani Sauce:

Heat the butter in a non-stick pan, add the cardamoms, cloves, peppercorns and cinnamon. Saute for 30 seconds, then add ginger and garlic pastes and sauté another minute. Add the tomatoes, red chili powder and salt. Cook on a low flame until butter starts to separate.

To finish the sauce, sauté the julienned ginger and green chilies in hot oil in another pan. Add the sauce and bring to a boil. Reduce the heat and simmer for 10 minutes. Add the honey and powdered fenugreek. Add in the chicken pieces and simmer for 5 minutes, Then add the cream. Serve hot with naan or paratha breads.

Like spicy food? Why not try Khao Soi Curry Noodles which we learned to make on board AmaWaterways Amapura in Myanmar. Or try Macaw Lodge’s recipe for Chilero