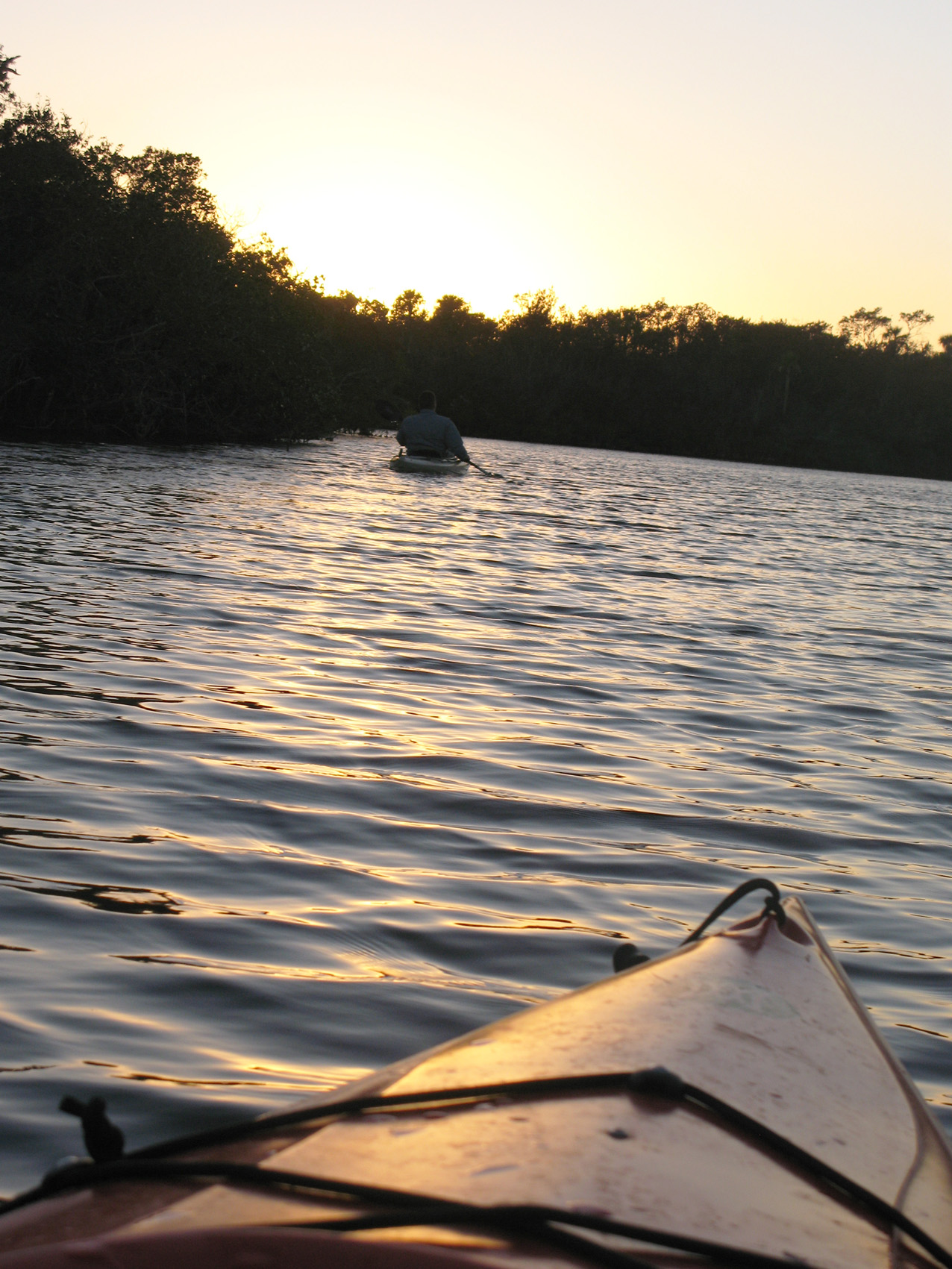 In the Florida Everglades, the sun slowly sinks below the tall trees and gnarled mangroves. Birds are returning to their nests for the night; a graceful egret flaps past, way up high, and a hawk effortlessly lands on a nearby stump. The lazy anhingas which sat a little while ago with wings spread to catch the sun, have disappeared from sight. Is it because their black feathers make excellent camouflage or have they too, gone home elsewhere? 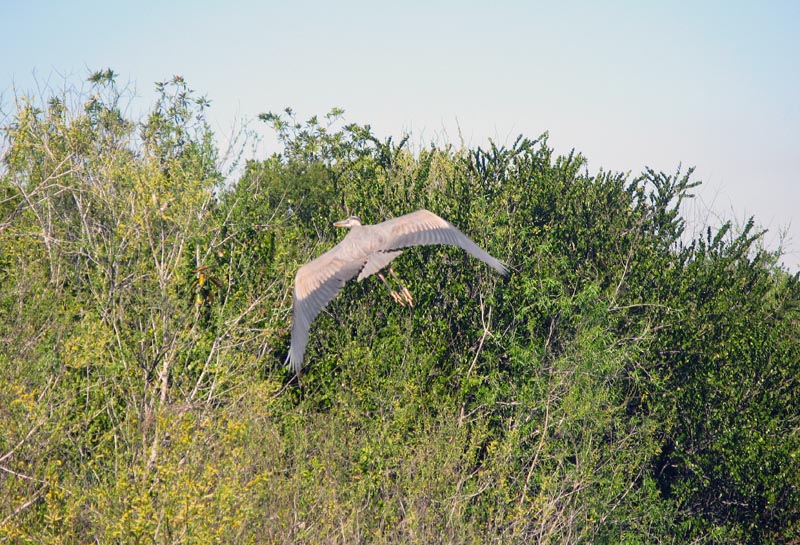 What have definitely gone home are the airboats which roar around the channels, taking visitors to see alligators. Blessed peace – punctuated by the sounds of water and nocturnal animals – descends upon the Everglades. It’s time to hunt alligators – in the dark.

Our little crew of four kayaks paddles through the gathering gloom, but as darkness descends, we switch on our headlamps. They cast their light through the tangled branches, and we concentrate hard, searching for a pinpoint of orange in the darkness. 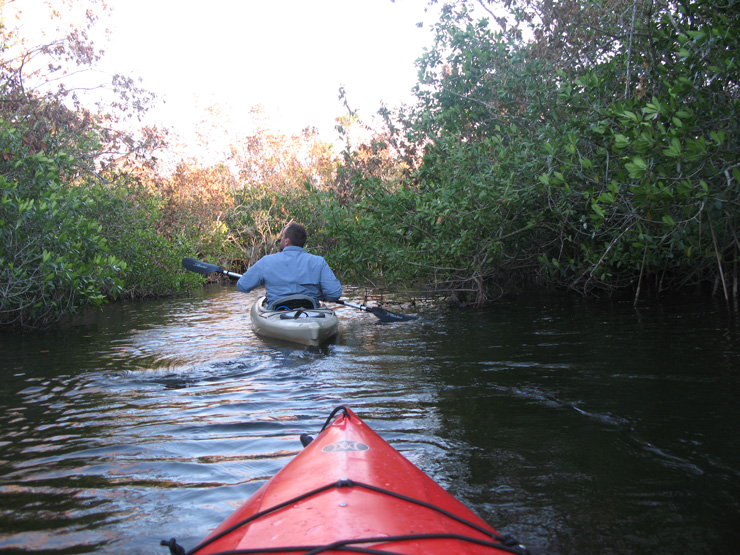 Suddenly, someone in another kayak calls out, “Here’s one!” And we all sweep our lights around and paddle closer to the spot he has lit.

Alligators in the dark

The eyes of an alligator glow yellow/orange in the light from our headlamps, but you have to catch them just right to see this. This proves easy as the huge alligator decides to come and investigate. The guide cautiously suggests we move back slightly, and we’re all privately in agreement! But our kayaks are large enough to intimidate the reptile and after coming several feet, he turns sideways to us. He’s now less than 10 feet away so his dark length is clear in the paler water. Wow, he’s a big fellow! Sadly, it’s too dark to photograph without startling him with a flash.

We move off again and in the course of an hour, spot several more alligators lurking in the undergrowth. We might never have seen them in daylight, so well do they blend into their environment. Their glowing eyes are the only clue.

It’s hard to describe the thrill this adventure affords me. These are big beasts, primeval and dangerous, and there’s nothing but a few feet of open water between us, water they can move through way more efficiently than I could.

Still, in the pitch darkness of an Everglade night with the only light coming from a half moon, the guide has to bully us into finally paddling back. And as it is so dark and none of us knows the way back to the spot from which we launched our kayaks, following him is a must.

Eventually, happily tired from our paddling and glad to get back, we stumble back to our room at the Ivey House in Everglades City to change for dinner. The Ivey House offers a whole range of expeditions – as well as a whole range of accommodations – for those who want to explore the Everglades. There are daytime trips, but as these are conducted to the background roar of airboats, I can’t help but appreciate our late afternoon departure to see the sun go down.

Alligators in the light

We want to see the alligators in broad daylight. It’s not far from Everglades City to Shark Valley in the heart of the true Everglades – the river of grass – that stretches 100 miles from Lake Okeechobee to the Gulf of Mexico. The Ivey House staff recommends this National Park site highly. The creatures here share a freshwater ecosystem of sawgrass marsh and tree islands, and the alligators have become so comfortable that they simply lounge by the side of the road. There’s a tram that takes you the 15-mile round trip through the park, with an observation tower halfway along its length. But I would recommend doing this on foot or on bicycle. 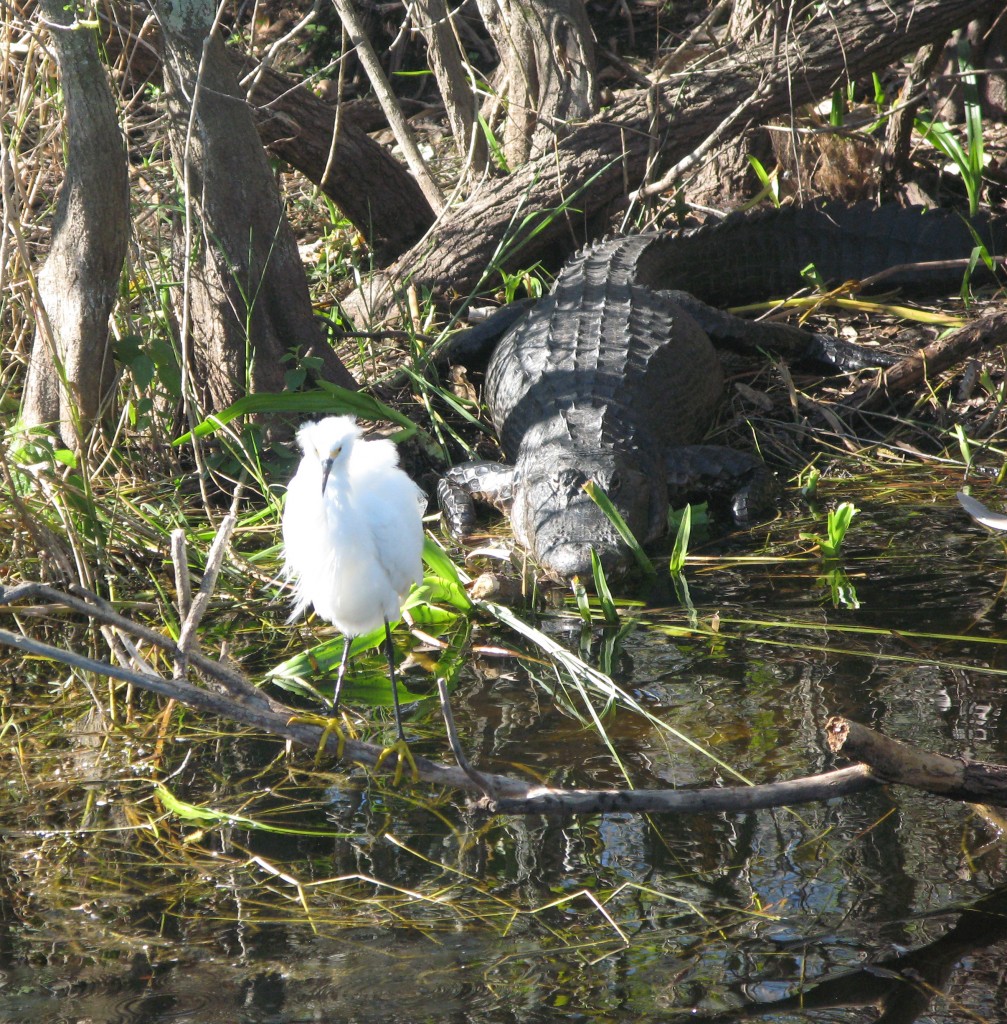 We watch the tram whizzing past as we stand and look closely at huge alligators and delicate birds, sunning themselves side-by-side in the marsh. It’s quite awe-inspiring. Only half a mile or so from the visitor centre, the splash of water, the chatter and chirp of birds and the click of my shutter are the only sounds to be heard. But just once, we hear a distinct, deep mutter from an alligator nearby and depart the area hastily. I doubt we would have been in any danger, but tell that to my rapidly pounding heart! 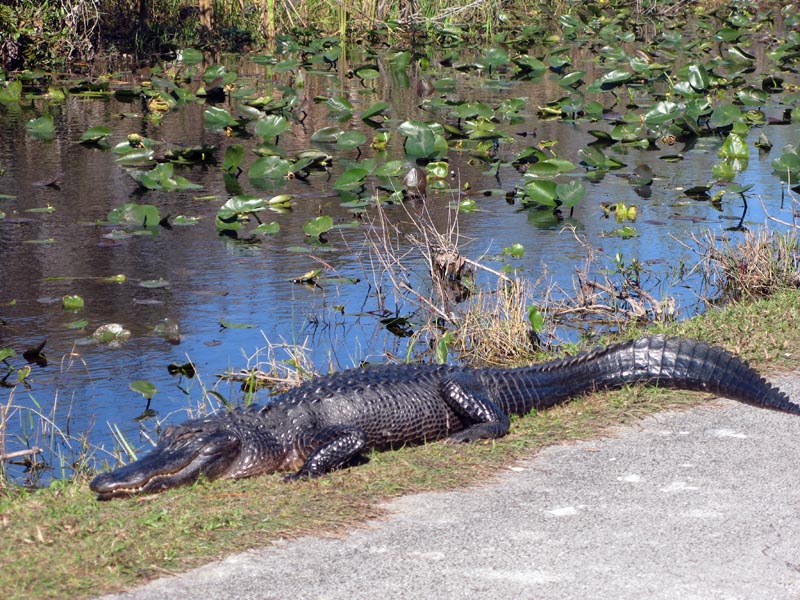 He’s just a couple of feet away!

There’s much more than animals to see – beautiful plant life and flowers. Unhappily, I can’t identify these, but their spots of bright colour make a striking contrast in a world of swampy brown and green.

It’s hard to believe that The Everglades, this magnificent wetland encompassing a vast area of Southern Florida, was very nearly completely destroyed.  In the late 1800s, the draining of the area was begun, in order to create more development. But for once, the state’s dreaded hurricanes actually helped, flooding the area and causing developers to give up in disgust. In the 1970s, UNESCO designated the Everglades as one of only three wetland areas of global importance, thereby stopping any further destruction. Indeed, the government has been working hard to restore and preserve the area.

It’s a wise move since this is one of the few parts of the state that hasn’t fallen prey to Florida kitsch. It’s always amazing to me that a state with so much natural beauty should also go to the other extreme. With nature at its best and civilization often at its worst, Florida is definitely worthy of a visit. Buy the T-shirt if you must, but don’t let the formidable natural world in Florida escape unnoticed.