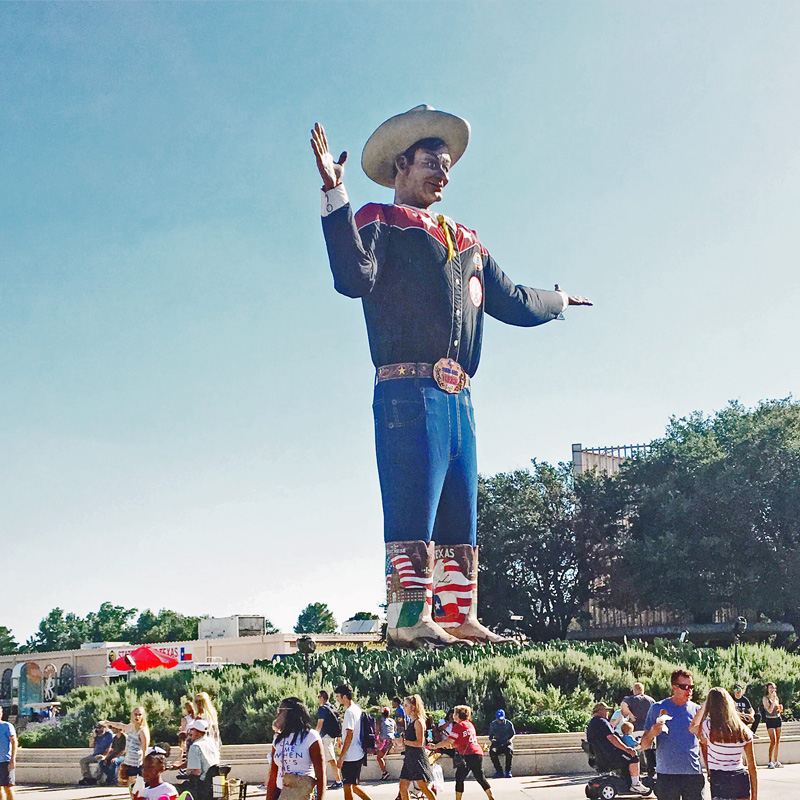 Big Tex, the 55 foot-high symbol of The State Fair of Texas, waves a welcome to the crowd. “Howdy,” he says. “This is Big Tex.” 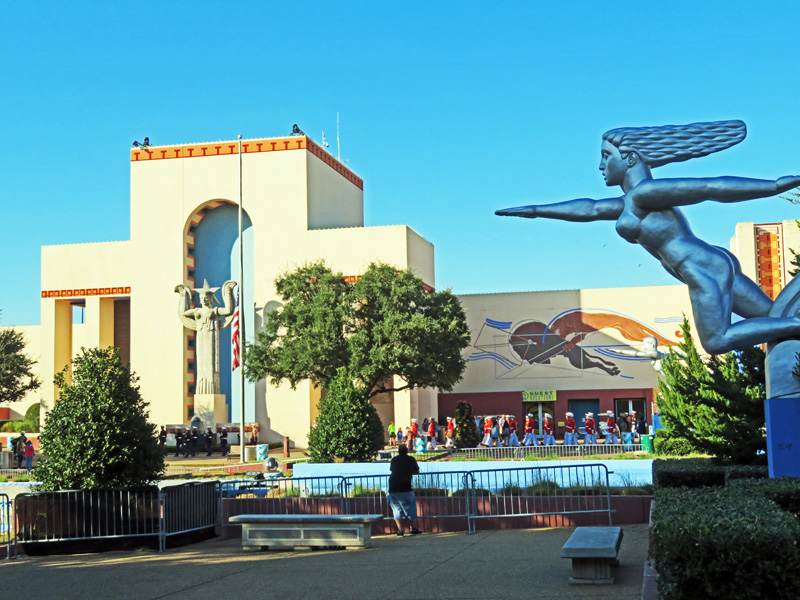 It’s my first visit to what has become an annual pilgrimage for many Texans and visitors to the state, and a chance to see what the hoopla is all about. The State Fair of Texas began in 1886, but the beautiful Art Deco buildings were added in 1936, when Fair Park in Dallas was transformed from an early 20th-century fairground into an Art Deco showcase. These were meant to be temporary, but several have survived and have been restored. Fair Park was declared a National Historic Landmark  in 1986. 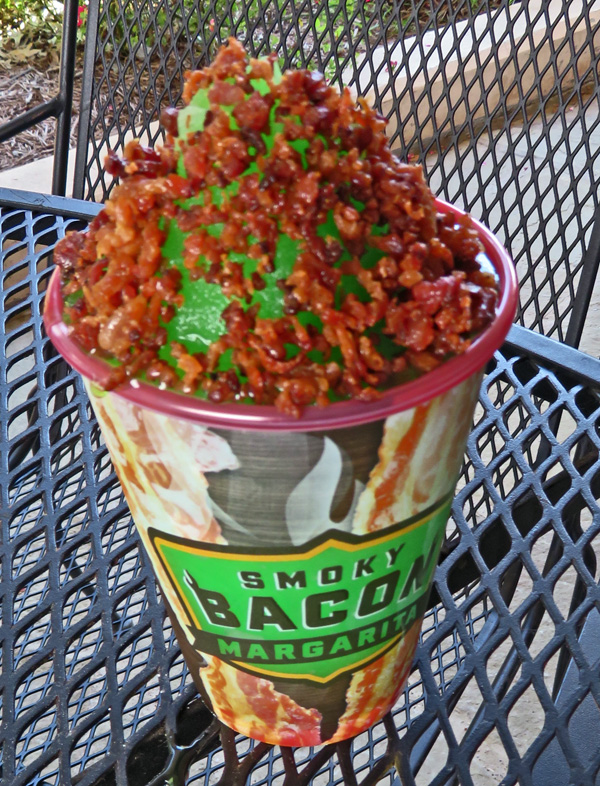 Architecture is great, but I’m a foodie, so I had to try out some of the fair’s legendary offerings, including the 2015 winner in the creative category: smoky bacon margarita. It’s sweet and salty, and thirst quenching on a hot Dallas day. 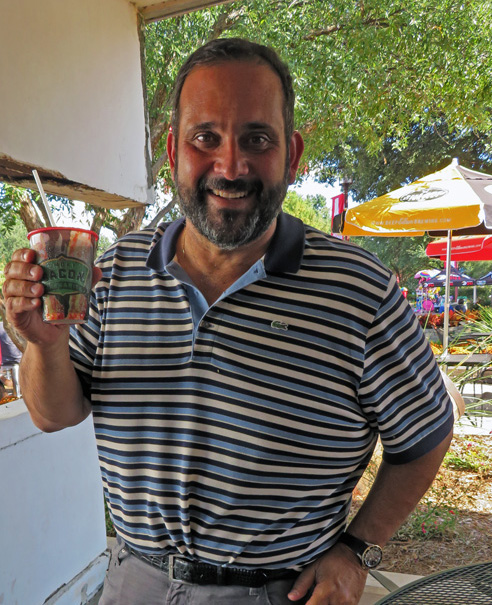 Isaac Rousso, its creator, is passionate about food and each year, his booth seems to garner awards.  His 14-year-old son, Joey, seems to be following in his shoes; you’ll find him at their booth, Magnolia Beer Garden, frying up this year’s entry which was a finalist for the Big Tex Choice award – deep fried Cuban rolls. 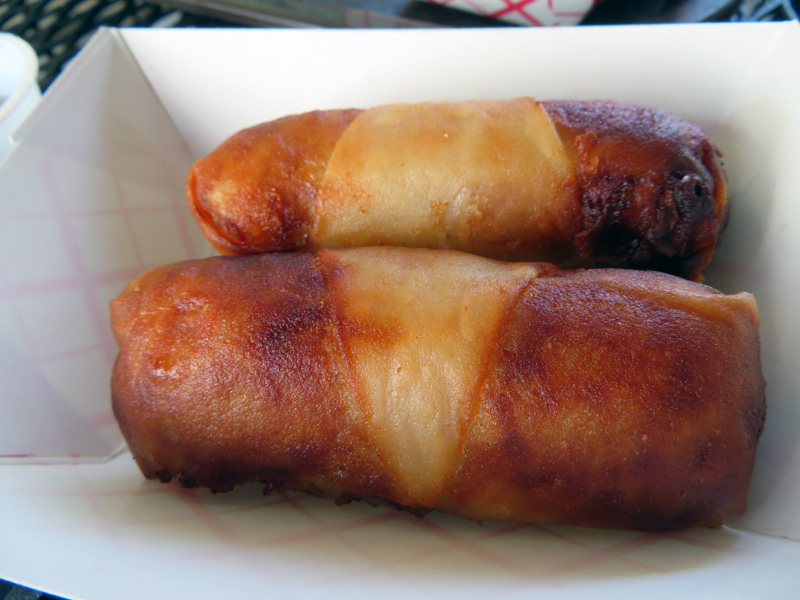 In fact, The State Fair of Texas is all about deep frying. The scent of it permeates the air and everywhere I look, something else is being deep fried. I’m not sure where this started but Fletcher’s Corny Dogs have been a staple of the Fair for 75 years. 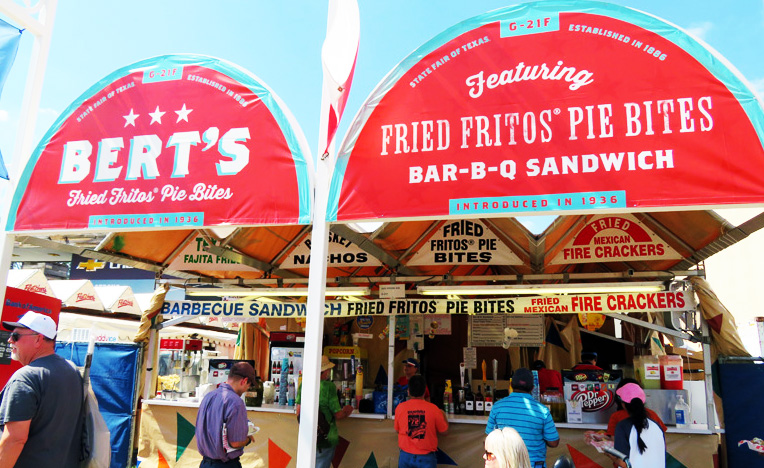 One man told me he diets for six months so he can indulge for one day. His favourite? An 8-ounce chicken fried lobster tail with champagne sauce served with French fries (of course) and bean and corn salsa.  I tried it. To me it tastes like fried chicken. The delicate flavour of the lobster is lost in the breading. But it’s absolutely delicious. It was created by Abel Gonzales who is also known fondly as Fried Jesus. 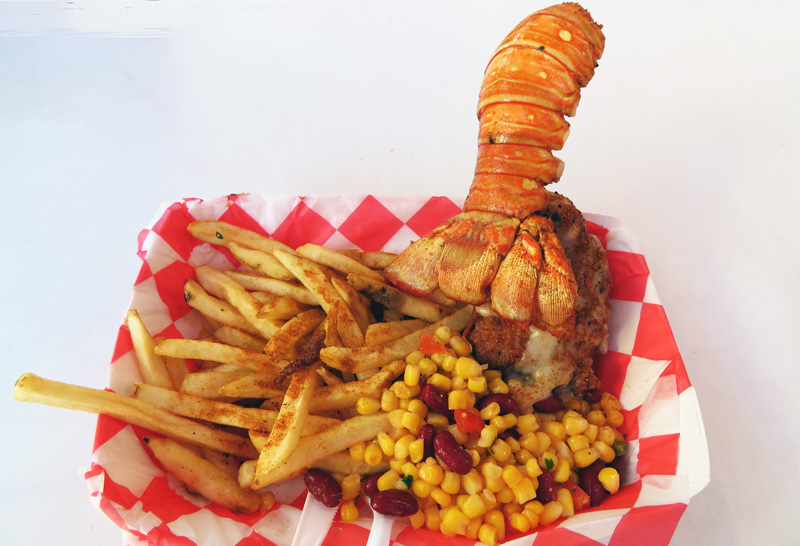 The creativity is extraordinary. Among this year’s finalists were ramen grasshopper cookie, beer battered beef jerky, deep fried breakfast cupcake, and a deep fried root beer float with Dragon’s breath (I can’t even picture this one). This Gulf Coast Fish Bowl with swimming Swedish fish and Nerds gravel won in the sweet category: 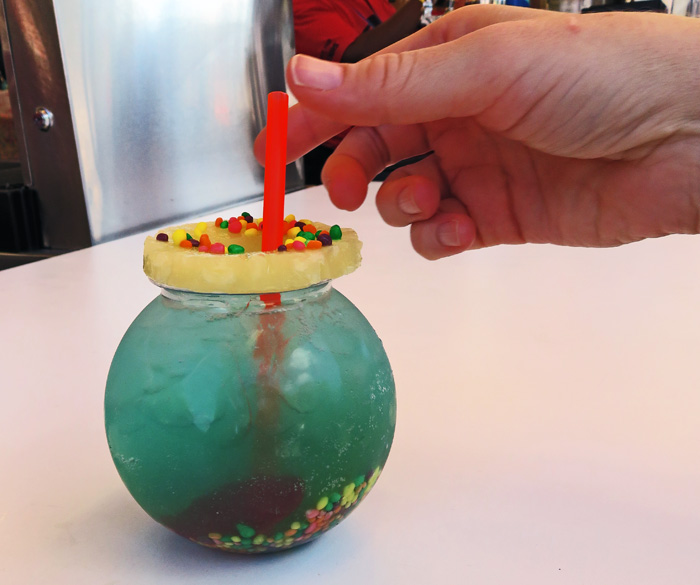 And this funnel cake bacon queso burger won in both creativity and savoury categories: 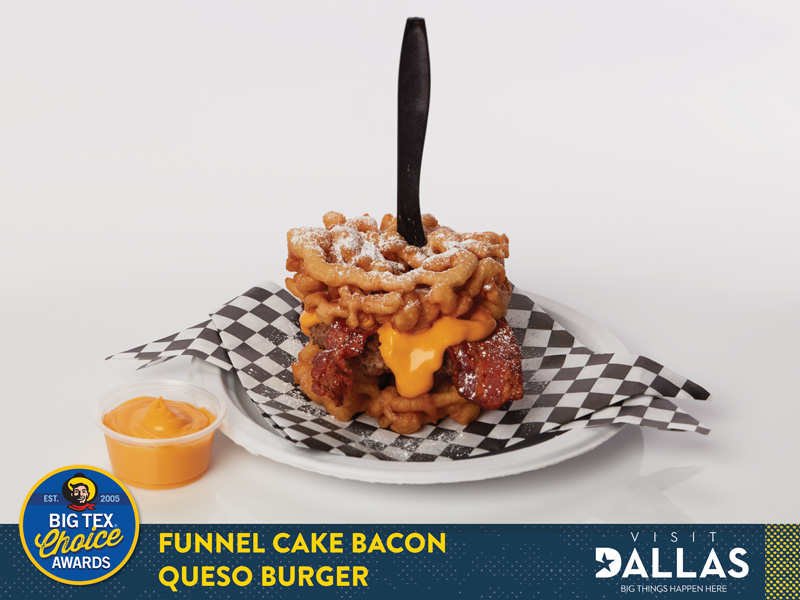 But my favourite entry this year is deep fried chicken noodle soup – seriously! The little holes in the dough are to soak in the broth in the container. 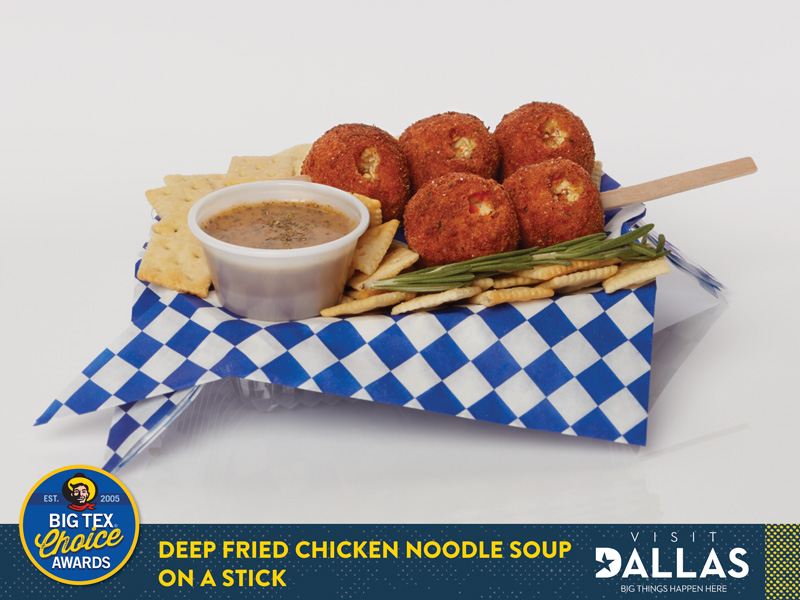 It’s the Big Tex award winners and finalists that people come to sample. And each year vendors vie to create ever more outrageous combinations in the hopes of winning the coveted award which comes with bragging rights for their booth. 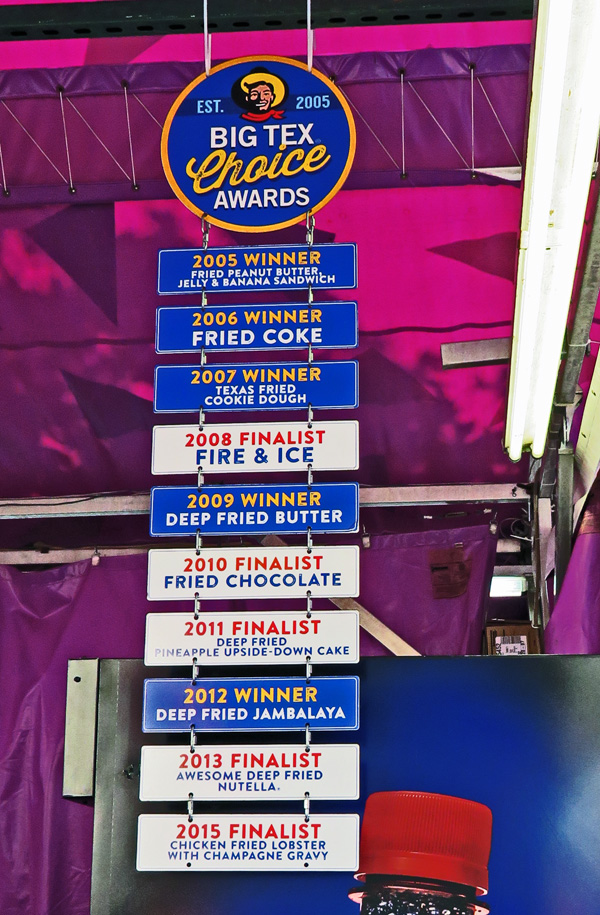 By the way, I should mention that the Fair has much more to offer. Agricultural exhibits and livestock, a car show, cooking demonstrations, football (this is Texas after all). Huge walls display the winners in preserves, jams, pickles and more. 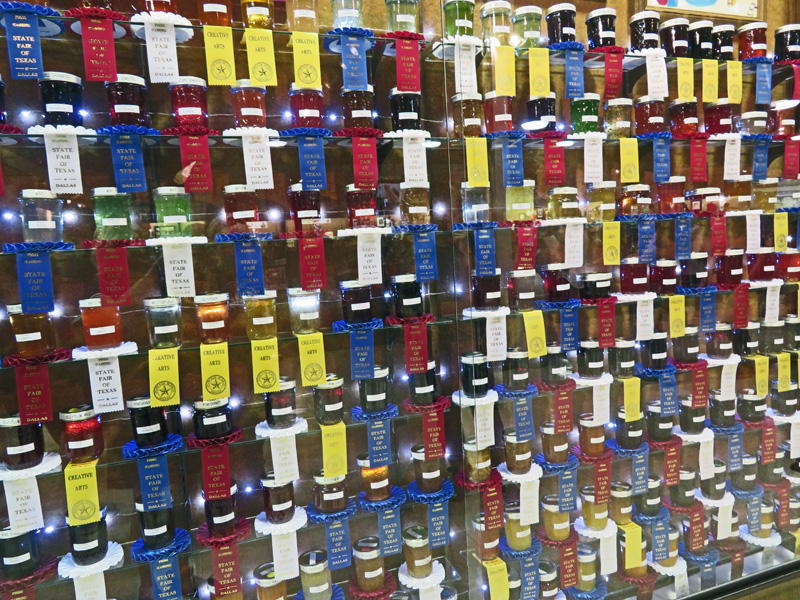 Winning preserves, jams, jellies and pickles give winners both money and bragging rights

My favourites were the crafts – quilts, dolls, crochet, knitting, pottery, you name it. 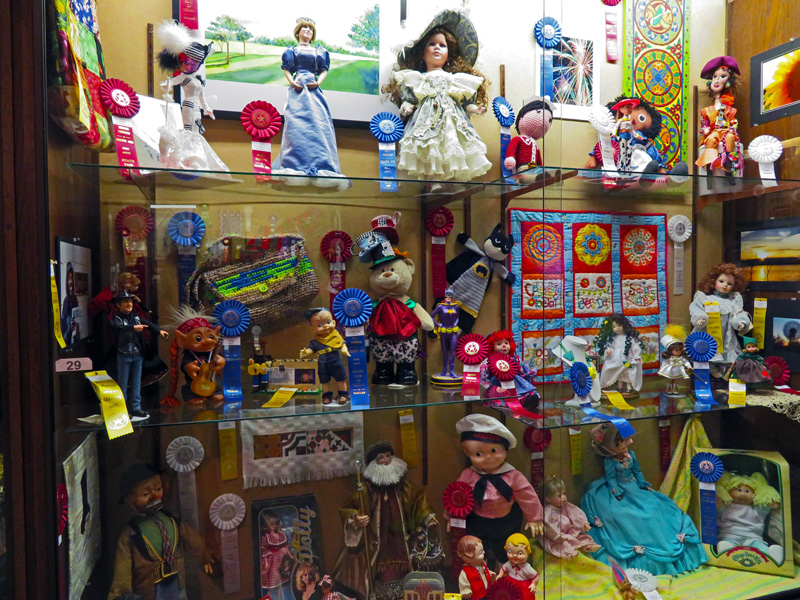 Don’t miss a sample of ghost pepper toffee (yummy but oh, that capsaicin kick at the end!), or a chance to check out an unusual ceramic grater or a new mattress (yes, they sell lots of these at the Fair). Or pop into the Texan General Store. 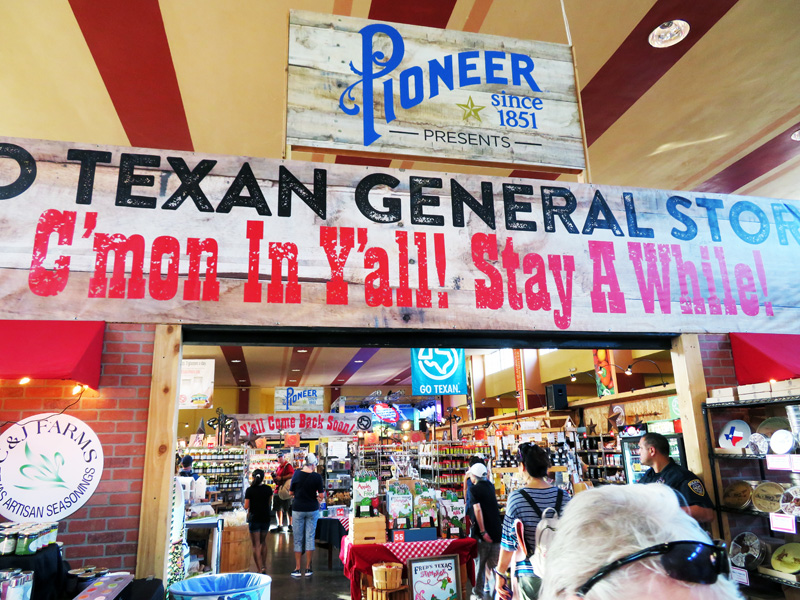 How can you resist a welcome like this. It’s so Texas!!!