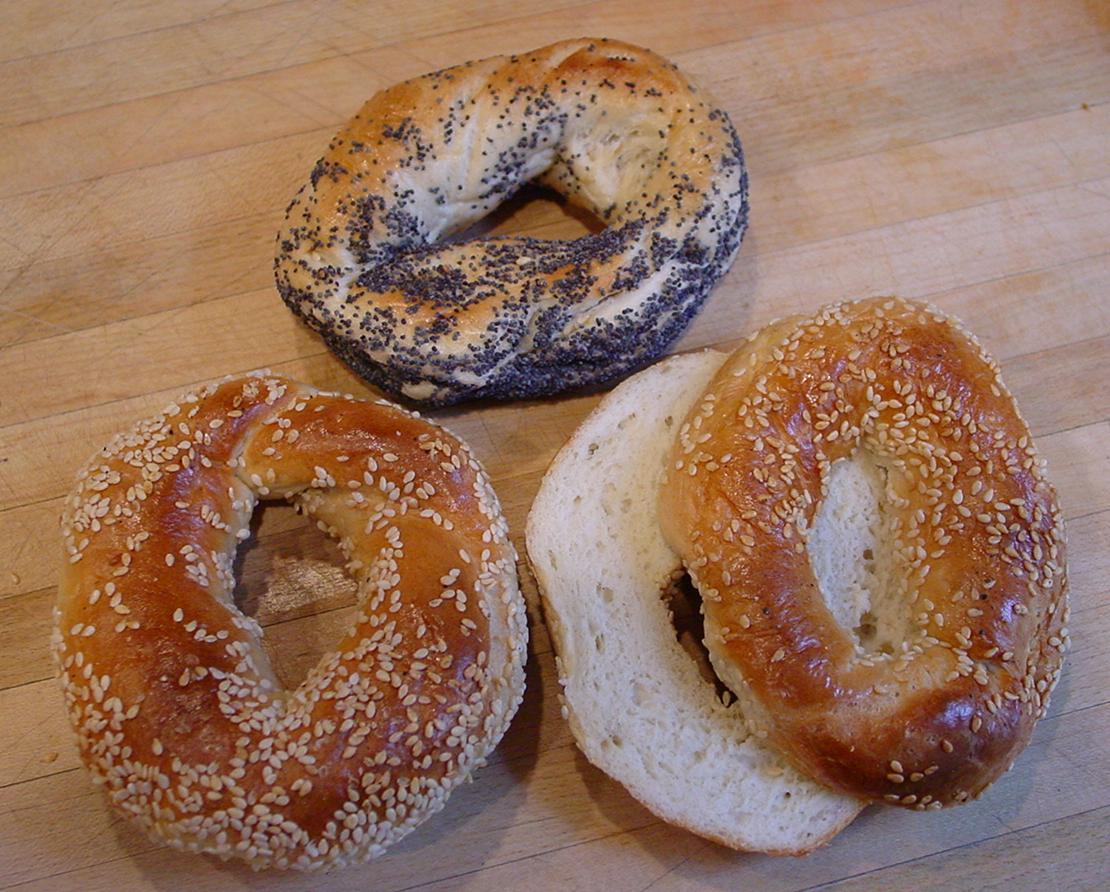 Life is like a bagel. It can be wonderfully fresh and warm, but it can also be hard – Jewish saying.

It’s been called the cement doughnut – admittedly not a very prepossessing sobriquet – and the longstanding divide in the world of bagels is the argument over whether New York or Montreal bakers make the best ones.

Now you might think, what is there to discuss – after all, a bagel is a bagel. But you’d be wrong.

Bagels vary enormously, as any aficionado can tell you, though the basic recipe is similar. Both Montreal and New York camps use malt rather than sugar to sweeten their dough; both boil the little rings in water (though Montreal bakers sweeten that water with honey); and both bake the rings after boiling (a wood-fired oven is best, according to purists). But there the similarities end.

Montreal bagel bakers usually add an egg to the dough, but not salt. The American version is the reverse – no egg, but salt added.

The result is a slightly softer, chewier version with a larger hole from Canada while New Yorkers have to gnaw on the crustier outside of their big bagels. It’s said that if a baby can teeth on a bagel for ten minutes without making any appreciable dent, it’s a true New York bagel!

There are many legends about the origin of this distinctively Jewish fare – in fact, add lox (smoked salmon) and cream cheese and you have the quintessential Jewish sandwich. One account, offered by Encyclopædia Britannica, is that the bagel was created in 1683 by a Polish baker in honour of Jan III Sobieski, King of Poland, whose cavalry successfully defended his country from a Turkish invasion. To celebrate this victory, the bread was created in the shape of a horse’s stirrup or buegel. Indeed, the fact that the true bagel is never perfectly round may lend some credence to this theory.

But Leo Rosten, author of The Joys of Yiddish, says that the first printed mention of the word bagel is actually earlier – in the Community Regulations of Cracow for 1610. It mentions the bagel as a gift to women in childbirth, its round shape representing the circle of life and good fortune. 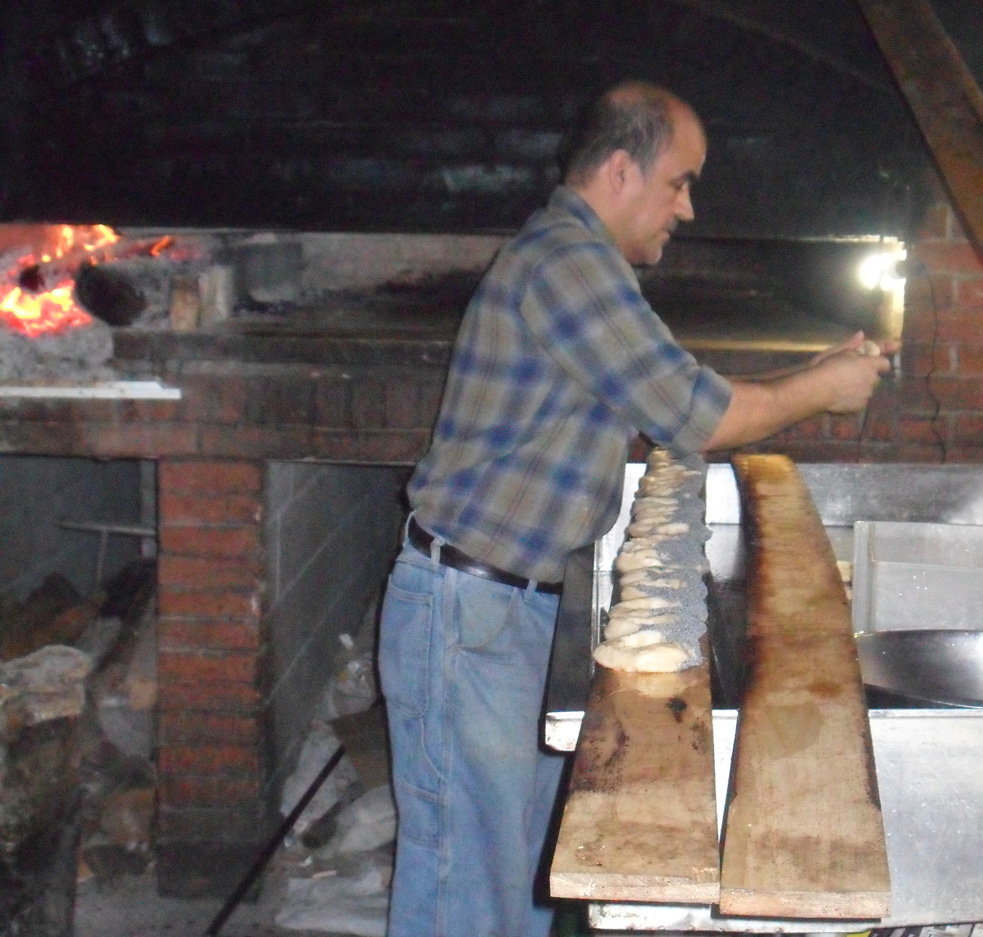 Making bagels in Ottawa’s Byward Market; these are topped with poppyseeds but are they Montreal or New York style?

Whatever its origins, it has become the favourite fare of many North Americans. Hey, it’s even on the menu at Tim Horton’s! And check out any supermarket bread department; you’ll find at least three or four varieties of bagel. Needless to say, there’s controversy here too. Purists will tell you there are only two things that should adorn the crust of a bagel – sesame seeds or mon (poppy seeds). But these days even original Montreal bagel makers like Fairmount and St. Viateur (yeah, yeah, this Jewish bakery is named for the street it’s on, not a Catholic saint) serve up everything from onions and garlic to caraway seeds and pretzel salt; there’s even (gasp!) blueberry bagels! And of course, there’s the mish mosh – Yiddish for some of everything. Bagel dough is no longer made with just white flour either. Rye, whole wheat, pumpernickel and even spelt varieties of bagel can be found. What do purists think of this, I wonder?While ex-Montrealers (and Toronto has a few of those) bemoan the lack of acceptable bagels, Toronto undoubtedly has a number of notable bagel bakeries. For example, one reader raved about The Bagel Brigade. “The poppy and sesame bagels don’t just have a few seeds, they’re covered, fresh and crispy,” say Sheila and Leo Wynberg.

St. Urbain Bagel in the St. Lawrence Market is patently capitalizing on their name – St. Urbain St. in Montreal’s old Jewish district, was made famous by Mordecai Richler – to evoke thoughts of true Montreal-style bagels. The line-ups for their bagels have plenty of nostalgic Montrealers.

Others swear by Gryfe’s, a Toronto institution for half a century. According to sources, theirs are eminently schmearable (this is one of those Yiddish words that perfectly describes the action – spreading a topping on something), which makes them ideal for sandwiches.Who really has the best bagels – Montreal or New York? “They’re just different; it depends on what you like but the battle will never end,” laughs Moishe Gryfe, but he’s throwing another hat in the ring. “But we’ve converted a lot of Montrealers to ours. We call it a Toronto bagel.”

Want to try your hand at this classic? The following is adapted from A Treasury of Jewish Holiday Baking, by Marcy Goldman, a professional baker from Montreal.

1. In a large bowl stir together warm water, sugar, oil, yeast, egg and malt until yeast dissolves. Stir in salt and 1 cup flour. Fold in enough flour to make a soft dough, about 3 cups.

2. Knead dough for 10-12 minutes, incorporating additional flour as needed, until dough is firm and smooth. Cover with inverted bowl and let sit 10 minutes.

3. Divide dough into 12 pieces. Roll into 10-inch ropes. Curve each rope around hand, pressing together ends to make a bagel shape. If necessary, apply drops of water to help ends stay together. Let bagels rise for 30 minutes.

4. Fill a large kettle with 6 quarts water and honey. Bring to a boil. Preheat oven to 425 degrees. Line 2 baking sheets with parchment paper.

5. Boil bagels in honey-sweetened water for 1 1/2 minutes, turning once. Drain on dish towels and place on baking sheets.

6. Generously sprinkle both sides of bagels with seeds.

7. Place bagels in oven and bake until golden, about 20 minutes, turning once.

Story originally ran in The Town Crier, Toronto, in 2007.